This was from a few years back and I thought it was an interesting concept worth another look for people to consider.

"Certainly you can select the very best spouse with probability at least 1/100, simply by marrying the first person [out of 100 choices]. But can you do better?" 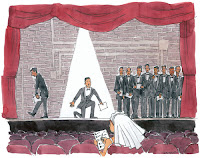 One of the fun things about being a scientist or philosopher is that you get to name things. If your name catches on, then you have a little bit of fame that lives on after you die. Unfortunately, since few people learn who came up with a name even if they learn it, the fame is a bit limited. For example, the "hedonist quandary" is a name given to the phenomena in which seeking after pleasure always ends up being self defeating because the pleasure is never as good as you hoped and once you've experienced it is never quite as satisfying again, driving you to ever greater excesses. Who came up with that title? Who knows.

I can tell you who came up with the Oenophile's Quandary. It's Dave Malki, creator and writer for the unique and fun comic Wondermark. Here's the original comic:

The Oenophile's Quandary basically comes down to this: how long do you hold a commodity which increases in value before you take advantage of it? If you wait too long it may spoil or reduce in value, or you might not get a chance to enjoy it. If you don't wait long enough, you'll never see it accrue much value or quality and waste future benefit. Anyone who trades in stocks has experienced this quandary.

Now, the Wondermark creator was having a bit of fun but this is a real concern for some people. Waiting for the right moment is mostly guesswork and while experience can help learn, there's often no way to be certain when the perfect moment is. Economist Tim Harford tries to answer this question on his site, referring to the "spongeworthy" episode of Seinfeld:

This is an option-value problem: every sponge or bottle consumed is one that cannot be used later. It has been solved by Avinash Dixit, a renowned game theorist and former president of the American Economic Association. (For some reason, Professor Dixit waited to finish his term of office before publishing his research on spongeworthiness.) Unless you are absurdly patient, you should open them more quickly than you might think.

Assuming you are patient enough to wait for a gain of 5 per cent a year – but not more – and if you have one possibly special occasion per month, Dixit calculates that you should open a bottle if you expect an occasion in the top 21 per cent of all possible occasions. As the number of bottles remaining shrinks, raise your standards. The last bottle should be consumed on an occasion in the top 9 per cent.

Dave Malki goes on at the Wondermark site considering this question, including his quote from Scientific American on the economic concept of "optimal stopping" by Theodore Hill:


In the 1970s, the theory of optimal stopping emerged as a major tool in finance when Fischer Black and Myron Scholes discovered a pioneering formula for valuing stock options. That transformed the world’s financial markets and won Scholes and colleague Robert Merton the 1997 Nobel Prize in Economics. (Black had died by then.)

The Black-Scholes formula is still the key to modern option pricing, and the optimal-stopping tools underlying it remain a vigorous area of research in academia and industry. But even elementary tools in the theory of optimal stopping offer powerful, practical and sometimes surprising solutions.

He calculates you have basically a 33% chance of making the right choice of when to stop if everything is random, at least with a limited number set. That doesn't tell you when to stop dating, but it can give you confidence that at least you have a fairly good chance of success when you drink that aging wine.

And, as Malki points out in a link wine doesn't necessarily get better with age, at least not past a month. And all wines turn very nasty if you age them too long. I don't have an answer to the Oenophile's Quandary other than to say it is better to be content with what you have than to always strive for perfection, because you cannot be perfect in this world.
Posted by Christopher R Taylor at 10:19 AM