SONGS I LIKE: Middle of the Road (The Pretenders)

I can't get from the cab to the curb,
Without some little jerk on my back 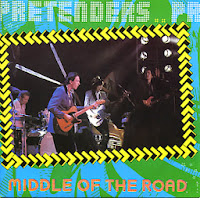 The Pretenders started out as an angry punk band with a girl singer, and over the years grew and changed.  Their music was always entertaining and unlike most punk bands well-crafted and talented.  By the time the Learning to Crawl album came out in 1984, the anger had mellowed and the group was writing more thoughtful songs.
One such song of that album is "Middle of the Road," which has one of the best riffs in popular music.  The Pretenders have had many such riffs, such as in the song "My City Was Gone," which Rush Limbaugh bought the rights to use for his radio show.*  Given the difference in politics between writer/singer Chrissie Hynde and Rush Limbaugh, they might regret the deal, but its made them money.
"Middle of the Road" is a song about approaching middle age and how life has changed for the band and Ms Hynde in particular.  She's not the crazy rocker she used to be, and she's beginning to develop a live-and-let-live attitude.
This attitude is something I think appeals to most people.  Few folks are really fire-eyed fanatics or strongly political in any sense.  I think most just want to live their life and be left alone, to go about their business of raising children, doing their job, and having a little recreation when they can.
Its not about being a moderate, its about not needing to interfere with everyone else.  This position is not political in any real sense, rather it is a real tolerance and self-reliance.  I can handle it, just do your thing and I'll do mine.
There are several lines in the song like "I got a smile for everyone I meet" as long as you don't try bombing me, and the quoted one above about some little jerk on my back.  Hynde can't help slipping in a line about income inequality from the back of her limo while sipping champagne, but the main thrust of the song is just about people who want to be let live.
And I think just about everyone is at that point with government, religion, entertainment, and so on.  That's part of why America was founded and structured the way it was: just get off my back and let me do my thing.  You'll be surprised how well it turns out.
But for some people, that's just not acceptable, they have to interfere, have to get into everyone else's business because they know best what is good for everyone else (usually, Animal Farm-style, not themselves).  Don't harass me, can't you tell, I'm going home, I'm tired as hell.
Its too bad that so many have lost that understanding and perspective.  It seems far too many want to be harassed, want to be interfered with, want to be controlled and managed.  Its easier that way, safer.  You don't have to worry about tomorrow, about what to do, where to go, and how to act.  Someone can tell you everything so you don't have to think or do anything yourself.
The middle of the road
Is trying to find me.
I'm standing in the middle of life with my pains behind me.

But, I got a smile
For everyone I meet.
Long as you don't try dragging my bay,
Or dropping a bomb on the street.

Come on baby,
Get in the road.
Come on now,
In the middle of the road, yeah.

In the middle of the road,
You see the darnest things.
Like fat cats driving around in jeeps through the city,
Wearing big diamond rings and silk suits.
Past corrugated tin shacks holed up with kids and
Man I don't mean a Hampstead nursery.
But when you own a big chunk of the bloody third world,
The babies just come with the scenery.

Come on baby,
Get in the road.
Come on now,
In the middle of the road, yeah.

In the middle of the road,
Is my private cul-de-sac.

I can't get from the cab to the curb,
Without some little jerk on my back,
Don't harass me
Can't you tell
I'm going home,
I'm tired as hell,
I'm not the kind I used to be,
I've got a kid, I'm thirty-three baby.

Get in the road.
Come on now,
In the middle of the road.


*This is part of the Songs I Like series.
*Corrected from earlier mistaken mention of this song being Limbaugh's theme music, thanks to Frank Trainor for correction.
Posted by Christopher R Taylor at 8:30 AM

Just to note that The Pretenders song used as Rush's bumper music is not Middle Of The Road, but a song called My City Was Gone. "B" side of Back On The Chain Gang. I enjoy WATN. You're a great writer.

Shoot, you're right. Also a great song with a great riff. I'll have to fix that, thanks!