A VIKING WE WILL GO

"...you do know I kill dragons and eat their souls, right, merchant?" 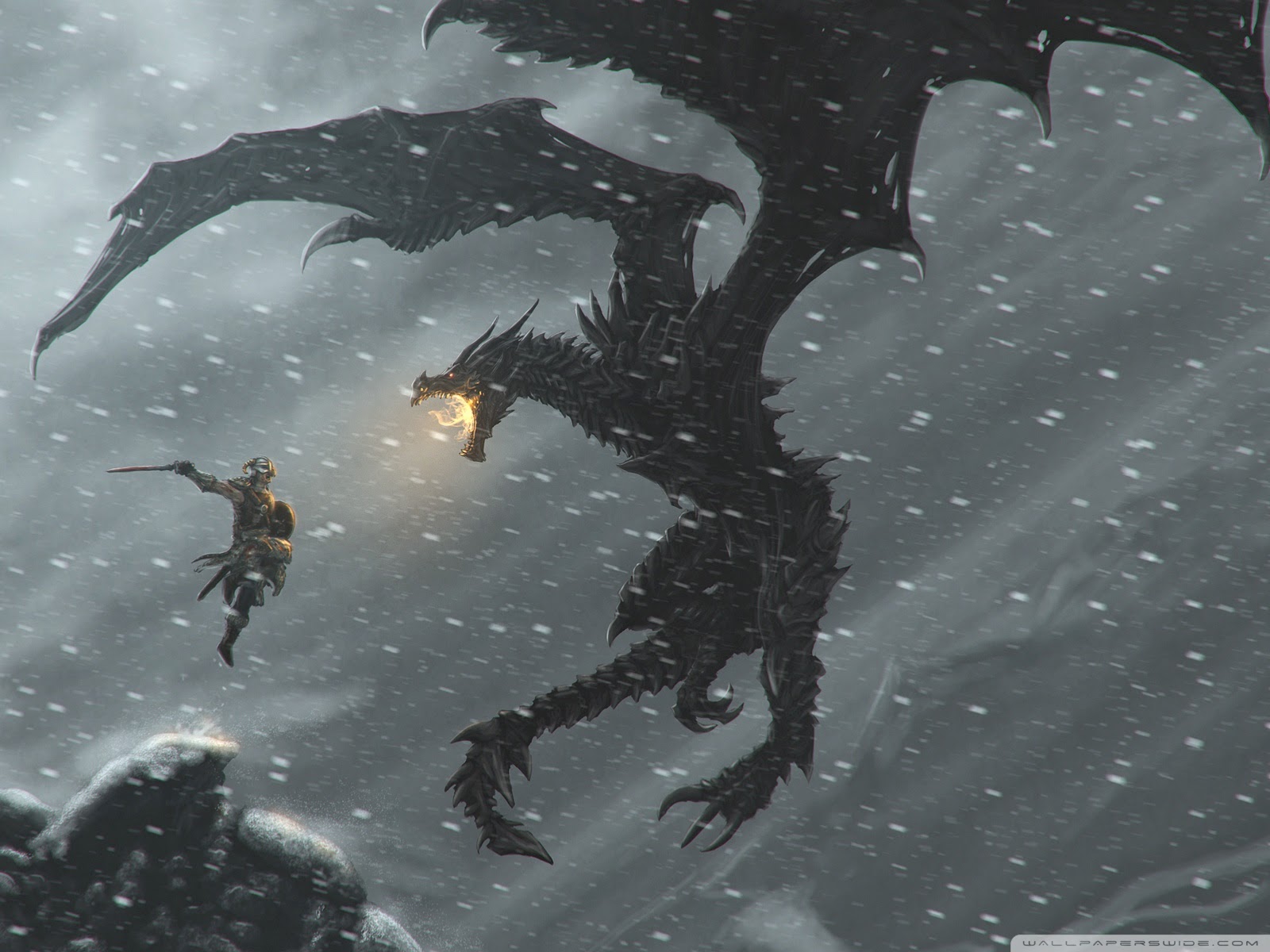 My brother Joel bought a box set with all of the Elder Scrolls games from Arena to Skyrim in it, with all expansions and downloadable content included. I hadn't played Skyrim yet because I couldn't afford it, and I really like the whole Elder Scrolls series.
For those who haven't played the games, they are a fantasy game for computer (and console, now) that mimics many aspects of role playing games.  Each one is a self contained game, but are all set in the same world following through historically over centuries of time.  Like the Might and Magic games, they are not a series, but instead separate games in the same world.
They're wonderful.  The first game Arena was the first to introduce the concept of building your own spells from basic elements instead of picking from a pre-made list.  Each game has exponentially increased the depth, immersion, size, and complexity of the game world while keeping the game play fun and easy.
Skyrim is quite simply, and without question, the best computer game I have ever played.  It is a masterpiece of depth and play, an absolute phenomenon.  All of the ES games have been great but this one tops them all.  It is HUGE in terms of depth and content, with thousands of storylines, unique NPCs, quest lines, and concepts.
Here's an example.  In part of a quest line to become "thane" (sort of a knight-like honorary title for a region in the game), I went to a set of old ruins where crazed tribals lived.  There I found a part of the ruins that overhangs a pool.  Jumping off for fun, I emerged to find a ghost of a bard who had done the same thing, but didn't make the jump.  He told me his story, sang a bit of a song, and I gained a few points of speechcraft so I can interact with other NPCs better.
The game is packed with that kind of thing, so much you get a definite feel for the world being a very old, ancient place with millennia of history.  The jaw droppingly beautiful graphics help this a lot.  I've rarely played a game that makes me just stop and look around regularly at the scenery, to take it all in.  That happens often in Skyrim, it is just absolutely amazing looking.  I see places I not only wish I could visit, but are done so well I almost feel like I am visiting.
Its just a masterpiece.
And part of the wonder comes from "mods" which allow you to adjust the game slightly or add content to it.  Like "addons" for games like World of Warcraft, you can download these and enhance your game play.  Some can be so transforming it almost makes a different game, some are goofy, and some are just repulsive and disgusting.
But there are some wonderful pieces done by people out there, and given the popularity of Skyrim, I thought I'd give you the list of mods I use and recommend.  Note, there are no links here.  I have given the proper name to these mods, but you have to sign on to either Nexus or Steam community to get them.  Its a free registration, but you gotta sign up.
Since you have to play Skyrim through Steam (grumble) you automatically sign on there.  I can explain how if people need the info.
MUST HAVE: You should have these if you're going to play Skyrim at all.
FUN AND WORTHY: not critical but enhance the game greatly and lots of fun to have
FUN STUFF: Mods that aren't even important but I find enjoyable and recommend.
Ive found these make the game interesting and deeper, and those three must have DLC equivalent mods add a huge amount of content to the game.  If you haven't played Skyrim, give it a shot, its pretty cheap now and its amazing.
Posted by Christopher R Taylor at 1:29 PM