THE VIRTUE OF FAILURE

"And why do we fall, Bruce? So we can learn to pick ourselves up." 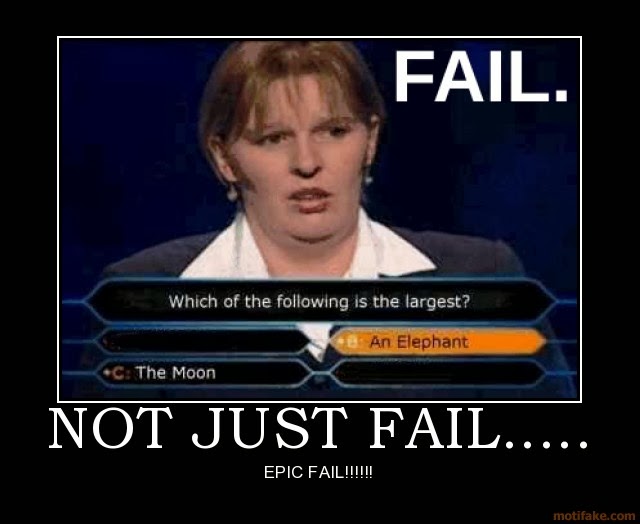 Google has a funny hiring policy.  They've spent millions of dollars and years of study trying to find the best and brightest employees, and from that they think they've learned an important key to good employees.  Max Nisen writes at Quartz:

Google looks for the ability to step back and embrace other people’s ideas when they’re better. “It’s ‘intellectual humility.’ Without humility, you are unable to learn,” Bock says. “Successful bright people rarely experience failure, and so they don’t learn how to learn from that failure.”

Google doesn't want to hire the top of the graduating class, because they've found that these people most often don't respond well to failure or being wrong.  A Google exec puts it this way:

“They, instead, commit the fundamental attribution error, which is if something good happens, it’s because I’m a genius. If something bad happens, it’s because someone’s an idiot or I didn’t get the resources or the market moved.
…
What we’ve seen is that the people who are the most successful here, who we want to hire, will have a fierce position. They’ll argue like hell. They’ll be zealots about their point of view. But then you say, ‘here’s a new fact,’ and they’ll go, ‘Oh, well, that changes things; you’re right.’”

Now, that response to new input doesn't necessarily come from success or being bright, but if you're always right and always successful, you will never learn an important skill that life teaches all of us, in time.  And that skill is being wrong.
Failure isn't just a question of misery and crushing defeat, it is a tool which teaches us effectively - sometimes more effectively than anything else.  As Thomas Edison said, he hadn't failed 99 times to create the light bulb (or, rather, his workers) but that he'd found 99 ways that didn't work.
When we fail, we learn something about ourselves and the task at hand.  If we do not fail, we never learn those lessons.  We can learn to do things by succeeding, but we learn other things by failing.  When a child falls down, they learn about gravity, their limits, what the ground is like, and how to better use their legs and feet so they don't fall next time. If you prevent them from ever falling, they do not and cannot learn that lesson.
As someone who was fairly bright in school and was able to comfortably skate through classes paying minimal attention, I can attest that Google is right about this sort of person.  Life and work has been so easy and linear that we become frustrated, angry, and blame all of the outside world for our woes rather than recognizing we failed and getting back up.
Nobody likes to fail; everybody hates to be wrong.  But we all need to, in order to grow and learn as human beings.  Yes, it hurts our feelings, and yes its humiliating at times.  Yes, it is frustrating and sometimes it even hurts physically, like the little boy skinning his knee when he falls.
But he gets back up and runs more after a short while, knowing better how to run and what to avoid.
And that's the ultimate evil of the modern attitude toward education and children.  Bubble-wrapped children not allowed to fail and treated as winners and successful no matter what they do do not and cannot learn these lessons.  When finally faced with the hard cold reality of life, they rebel by blaming the world for their woes in tear-blurred fury.
So we get the Occupy movement in the streets defecating on police cars and blaming Wall Street for their lack of a job.  Its all everyone elses' fault that life isn't easy.  Its wrong and evil that they have to pay their debts.  Its wicked that someone expects them to make their own way and pay for what they have.
When you protect people from failure, ultimately all you are doing is setting them up for it.
Posted by Christopher R Taylor at 9:17 AM