Get in the kitchen, make some noise with them pots and pans
-Shake, Rattle, and Roll

Its tiring for me, mostly because of standing up for that long, but I like to wash dishes.  I think its part of the "things which have a tangible, absolute effect" category that I like which includes things like mowing the lawn.  Its a task I can tell when its finished and the results are clear.  They were dirty and jumbled, now they are clean and organized.
This may seem like a silly, petty sort of thing to write about, but its actually important to wash dishes well, and while I would have thought its such an obvious task it wouldn't need any examination, its been my experience that it is not.
I visited a girl once and helped her daughter do dishes.  She was only 10 years old, so she was just a girl still, but her mama didn't teach her to do dishes at all.  And to make matters worse, the washcloth was an awful reeking bacteria culture that had obviously been reused for months without cleaning.
This might sound like I'm turning into Howard Hughes, but think about it a moment.  When you eat or cook, even make toast or soup, unless you use disposable dishes for everything, you are using dishes.  That means you're putting food on top of this stuff, then shoving it into your mouth.
And that means if the dishes aren't clean, they are covered with a film of mold spores, bacteria, and even potentially parasites and other nasties that you're scooping into your mouth.
Now, the human body is amazing at dealing with foreign intruders, but there comes a point at which it becomes overwhelmed.  And the more crap you shovel in, the harder your body has to fight just to stay healthy.
We've managed in the 20th century to defeat most of the really terrible diseases that plagued humanity like dysentery and tuberculosis but part of that defeat involved cleanliness and careful use of household detergents. If your body is constantly fighting germs and nasties, that means its using up energy it needs for other things on staying healthy, and you tire out easier. 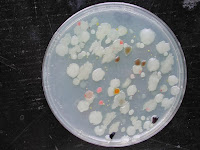 Further it means you're more vulnerable to other ailments as they come along, since resources needed to fight off the latest flu are being used to just deal with what you're eating.  And in keeping with the theme of surviving economic depression, as I noted in part five of the Economic Depression Survival Kit, you can't afford to get sick:

According to some studies, as much as 20% of the average household's expenses are health care costs. Even in good economic times that's a serious bite out of most people's paycheck, but when times get tight, that can be the difference between having a house and living out of a box.

So what can be done?  Its actually quite simple, but it takes a bit more time and focus than some, perhaps many, care to put into the job.
The first thing to do is have a clean workspace.  That means wash your sponge, washrag, scrubber, etc.  It sits there with bits of food caught in it and slowly begins to grow disease.  that needs to be regularly washed.  Make sure your drying towels are clean and fresh as well, because wet surfaces grow bacteria and mold, and towels hang there damp after being used.
Also, wash the sink, because its not going to help you get dishes clean if the sink has a film of disease and filth on it in the water.  Washing out the surface and the drying rack will make a big difference in keeping your dishes clean.  And that means the drain plug as well.
You need water so hot your hands can barely stand it.  Hot water not only helps clean and kill germs, it also makes the soap come off easier and will melt fats and grease that are collected on the food.  You want all that stuff coming off, every time.
And, I'm sorry Bill Engvall, but you cannot wash things with just hot water.  Even if you could, your hands can't stand water hot enough to do that job.  Water hot enough to clean dishes in, say, an industrial dish washer is so hot it would boil the meat off your hands.  It has to be that hot to clean dishes.  So that means dish soap.  Put it in the water, and a dab in your washcloth/sponge.
You'll need good tools, too.  A washcloth works great for many jobs, but some will need a bit more scrubbing power.  There are a lot of great products out there such as sponges with an abrasive side on them, scrub brushes, and bottle cleaners, and you'll want a good spread of them.  The reason for this is the same reason you have more than a hammer in your toolkit: each job is a lot easier with the right tools.
Cooked on or dried stuff needs to be scrubbed off, and cloth won't do it.  You can't get your hand inside every bottle or glass, so you need something to scrub in there as well.  And I recommend using an old toothbrush as well for small details.  Its stiff enough to scrub but not so hard  it will damage dishes. 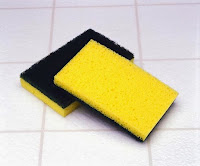 That means using the same tool for every dish won't get them all clean.  Just using a scrubber will not work, or just a sponge or whatever.  And you probably will need several for many dishes, one pass with the scrubber, one pass with something softer.  The scrubber will not clean all of the surface, and the sponge will not clean all of the tough bits stuck on the dish.
Now stop.  How much did you wash?  Yes, only the top of the plate seems to have anything obvious stuck to it, but think about this a bit.  What are you touching with each dish, just the parts with the food in them?  And what are you doing with your hands?  Eating. Rubbing fingers on unwashed parts of dishes then picking up food and putting it in your mouth is the same as licking those dishes.
Wash inside and out, all of the surfaces.  Everything should be clean when it hits that rack, or the dirty bits will rub on the clean bits of other dishes and you wasted your time.  Slow down and do the job completely.
After you've done a few dishes, you'll notice something.  There are bits of things in the dishwater, even if you can't see them under the foam from the soap.  That's the stuff that was on the dishes, now suspended in the water and stirred up from the bottom when you move it around.
In other words, you are slowly making soup in the sink out of all the stuff on the dishes.  That's okay for a while, but when the water starts to get cool and the soap is being overwhelmed by dirt, its time to drain that out and fill the sink again with fresh water.  Otherwise, you're not really washing anything.
And when you get a dish really clean, you can feel it. Some surfaces will even squeak when you rub them with a clean finger.  You'll be able to tell if something is all the way clean or not.  Take the time to get it there, its your health and money on the line.  And it will affect how food tastes.  You want the food to be on a clean neutral surface, not picking up the last meal's remnants.
Rinse thoroughly.  This is important because nobody wants to taste soap in their food.  There's a reason parents used to (still do?) threaten to wash the mouth out of kids with soap as a punishment: its awful tasting. Get those dishes all the way rinsed and let them dry out or dry with a towel completely before putting them away.
This is going to take some time.  Its worth it, and the time you take doing this actually gives you a chance to do other things.  With both hands and your eyes busy, you don't have time to watch TV or check your phone or go on the internet on your computer.  Good.  Not only is this a valuable break, but it helps you diversify your mental activity.
Take the time to think through things, to meditate on something wise, to talk to your family, to look out at the beauty around you.  I recommend radio for this time as well.  Music is good, but so are shows with talking in them.  I don't mean news or talk radio necessarily, although that can be fine.  You can use this time to listen to some old time radio shows.

Almost everything from the golden age of radio is actually online and available to listen to for free.  Get some comedy with the Jack Benny show.  Listen to a western, a mystery, a drama.  All those Mercury Theater shows that Orson Wells put on - War of the Worlds was one of them - are available to listen to.  The British are still doing radio adaptations of books and stories.  There are dozens of Sherlock Holmes versions out there to listen to.
And in the end, you're better off for the time away from your gadgets and engaging your mind with something different.  By the time you get the dishes done you'll not only have learned something but you will have a fresh set of clean, sanitized dishes to eat off of.
And who knows, that could mean more energy for other things you like to do, and less cost in the long run.
Posted by Christopher R Taylor at 8:17 AM

That's a lot of commonsense, which, as we know, ain't so common these days. My wife was reading some old health books she pulled off the internet and remarked how much emphasis they put on hygiene. Not a problem for her. She's the female version of Monk.

I shared this on Facebook, and now we are chatting about how comforting dish washing memories are! We are having a wonderful trip down memory lane. :-)

And then when you finish washing all the dishes and killing all the germs, make some toast and then butter it using that stick of butter that has been sitting out on the counter at room temperature for the last two weeks. :-)