"we have to break through our kind of private idea that kids belong to their parents or kids belong to their families, and recognize that kids belong to their communities"
-Melissa Harris-Perry
It seems like each president looks at the American public schools, rightly seems they are in terrible shape, and tries to fix it.  Each time, they fail, and often things get worse.  President Bush's idea was the "No Child Left Behind" act, which he got help to design from Ted Kennedy.  The theory was that this would make it a bi partisan effort to help it get passed and be supported by everyone.
Teachers largely hate the NCLB system, complain that it forces them to teach students to take a test rather than just educate, and most of its provisions to cut off federal funding, allow students to move between schools if their school consistently tests too low etc have been largely ignored.  There have been dozens of cases of school districts and teachers cheating blatantly to get better test scores.  After all its easier to cheat than to educate.
So President Obama's version is "Common Core" education.  And the reaction to this is largely, well, confusion.  I remember growing up hearing people laugh and boggle over the "new math" that was attempted in the 70s, nobody ever pushed that on me in school though.  It was the old 2+2 math for me, and it worked fine.
Common Core math, however, is just... weird.  As in nearly incomprehensible.  Here are a few examples, you've probably seen some at least: 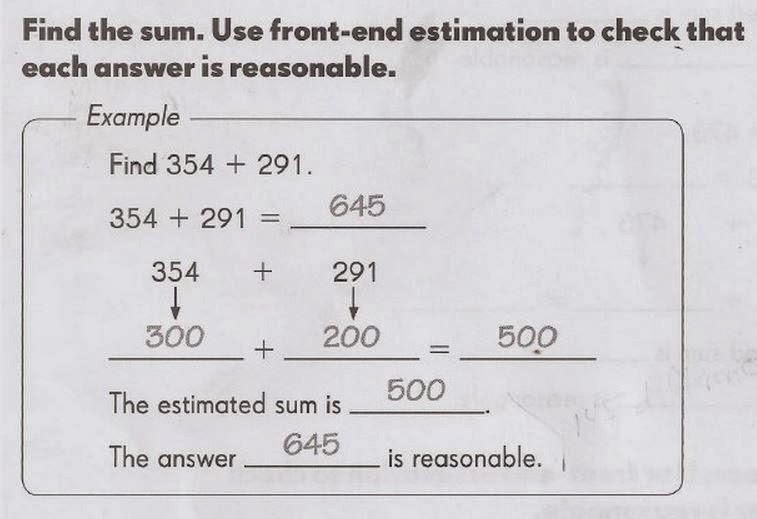 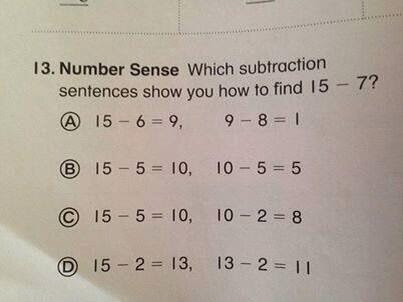 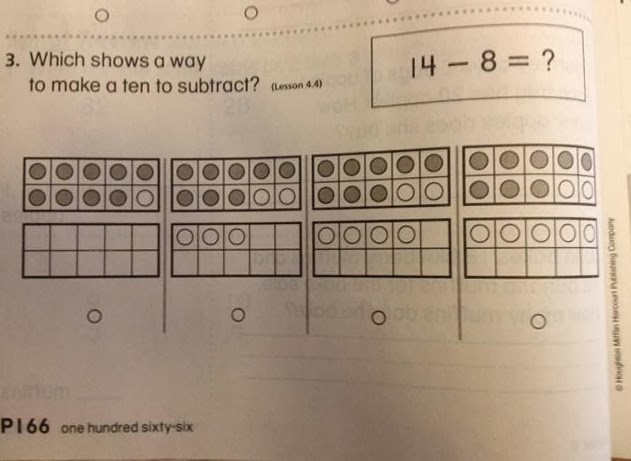 Now, if you have the info that comes behind this, it at least makes sense in terms of what they're trying to do, even if it still looks like hieroglyphics.Its an alternate system of math that tries to avoid left-brain rational analysis for pattern recognition and right-brain intuition.
See, here's what they are thinking: they believe there are all these different sorts of "intelligence" and that the old rational traditional system of math is targeted at a single sort of intelligence, and that hurts people who aren't part of that.
And since the theory is that women and minorities tend to be more right-brain thinkers and less left-brain (I'm not saying I believe this, just that the educational thinkers say so), this helps out preferred groups.  I've written about this before, but in the 90s a push for girls in school began out of... honestly I cannot understand where, claiming that girls were overlooked in school and passed over for more boisterous and noticable boys.
Now, I recall boys being veerrry quiet in class when the teacher asked a question, while the girls were all up like Hermione practically hopping in their seats with a hand up.  But this caught on and the huge push was to get girls more in school.  And its worked, boys have been pushed to the fringes.
This is also driven by minorities consistently testing very low for years and a concern about how to reach out to kids who get virtually no educational background or parental support in many very poor parts of the country.
So the Common Core math system is an attempt to reach out to these students and help them learn math in a way that works with their way of thinking.
The problem is that this only reverses the problem; it makes the left-brained rational students struggle and if you've learned math the old way, its absolute nonsense.  And in the end, you're left with students when they reach the non-school ("real") world, the systems you learned will cripple you with your off the wall picture way of solving problems.
And, in the end, I think there really is one best way to teach things, regardless of how people learn or their "intelligence" is aligned.  I'm pretty skeptical of modern learning theory, and would like to humbly suggest that part of a teacher's job is to teach students to think.  Making your students stretch and do what they don't know how is actually what a teacher is all about.

And this leaves out the presumptions hardwired into the curriculum about the role of government and how people should respond to governmental authority.  The same people who said "question authority" are the ones writing "do what the president says" these days, and that's just weird.
When Common Core was produced, it was first marketed to states as part of a "Race to the Top" program which offered nearly five billion dollars to states who would adopt it.  Common Core had not been finished yet, nobody knew what it was going to be like, but cash-starved states jumped on it like a frog in Calabasas, California.  Here's part of the deal when a stated signed up for the money:

C. Adopt Common Standards including those for Pre-K and Science and Social Studies; Take a Lead Role in Consortium to Design Common Assessments.  Louisiana will utilize R2T funding to implement a high-quality plan for the adoption and rollout of 100 percent of the common core standards, of which we have been an active participant with CCSSO on the design and adoption.

You want the cash?  You have to agree to implement the Common Core system.  Without knowing what it is or seeing it.  Where did that money come from?  Why the "stimulus" package which stimulated nothing but programs like this.
Something that comes up often is the fact that common sense isn't all that common.  And that always struck me as funny until I thought about it a while recently.  And I realized that "common" sense isn't using that word in the context of "prevalent and widely shared."  Common in this context is as opposed to elite or highly advanced.
Common sense is not sense most people have, but sense that does not require academic achievement and study to grasp.  Its something that is so basic and practical, so obvious and natural that the common man can easily embrace and understand it without specialized teaching.  It's "common" in the sense of "commoners" in an old feudal system.
And Common Core is not common sense. 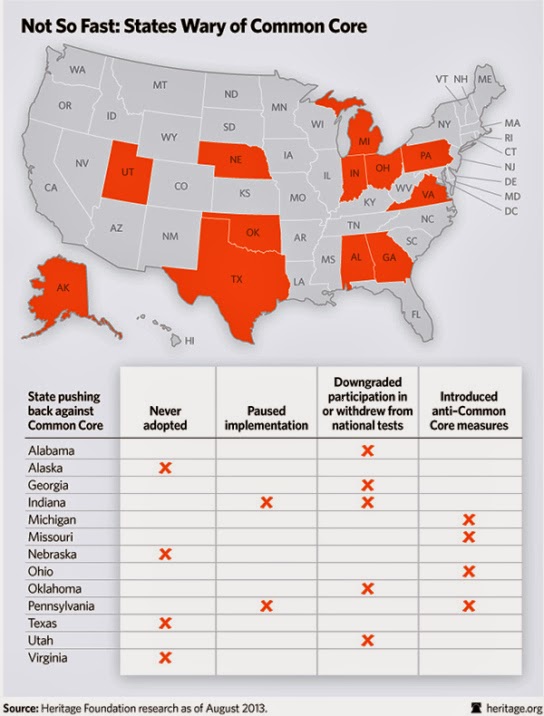 Thankfully it appears that there's a general low-level rebellion against the curriculum by a big cross section of the country, left and right.  When you put the man who oversaw Chicago's school system going from bad to atrocious in his oversight in charge of the department of education, this is what you get.  And people don't seem to care for it, no matter who they are.
Maybe what's best is for the federal government to stop meddling with education entirely and let the states handle it instead.  I know this interferes with a top-down single controlled system of education that pushes one viewpoint on all children, but really who wants that aside from a few glassy-eyed zealots?
Posted by Christopher R Taylor at 11:11 AM

(Figuratively) nuking the federal Department of Education from orbit would be a good start to getting this country back on track.