Compunction: Noun; a feeling of guilt or moral scruple that follows the doing of something bad


One of the common complaints about modern society is an almost total lack of accountability. You can be a complete jerk to someone and never pay a price.  The society we live in has gotten to the point, particularly on the internet, where people are almost totally without restraint or compunction.  Online, with a feeling of total safety from being out of range and anonymity, people act as horrible as they wish and there's nothing anyone can do.  Without immediate clues to someone's reaction and their personal hurt and horror confronting us, we act in ways we never would in person.
And yet, in a strange way, the new internet age has a new level of accountability that hasn't been around in the past, as well.  Several times in just the last year or so there have been companies who have changed policies or acted differently based only on social media.  Most recently is a store in Australia which included this shirt design: 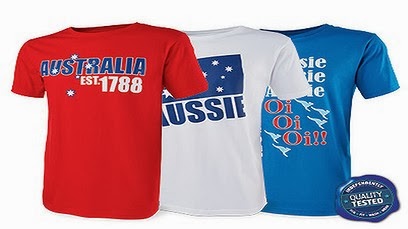 This caused a great deal of online consternation and dismay.  How dare they put out a shirt celebrating Australia's establishment as a country!  No, seriously, people were outraged.


An Australia Day T-shirt pulled by Aldi amid claims of ‘‘racist’’ branding had been approved by the federal government.

The discount supermarket had been criticised for a range of promotional T-shirts branded with ‘‘AUSTRALIA EST 1788’’ logos, advertised online.

The design sparked an online  clamour with people taking to social media to label the range  racist and culturally insensitive to Australia’s indigenous people, who inhabited the continent for tens of thousands of years before the arrival of the First Fleet from England in 1788.

Apparently the idea that Australia as a nation is distinct from Australia as an island is too abstract and lofty a concept for some to grasp.  But notice, it was social media pressure that caused the change in policy.  They yanked the shirt based on social media.
Its odd, because I can talk to people directly (unless blocked) on twitter who previously wouldn't be even slightly accessible at any level.  People who wouldn't even look at me on the street, who'd have bodyguards push me away if I tried to say a word to them, I can send a message directly, and they'll read it.
This gives us access to folks who never in the past anyone has had access to.  And for some bizarre reason, they think it matters.  Think about it.  Nothing has changed, they're still basically inaccessible, and one voice out of Oregon is meaningless.  But they listen and even respond, because its on Twitter.
Its a psychological thing, obviously.  If I was some voice in a crowd, they'd ignore it, because they are used to handling that voice, and the context makes it clear I'm nobody.  But online, suddenly every voice takes on enormous significance because there's no context.  You can't tell how important the person is simply by their text and a name. You can't tell their age, status, sanity, education, or anything about them except the words.
And if you're previously someone who only gets contacted by people who "matter" in the past, when you get contacted, you'll tend to presume that this voice matters.  And for some reason, words in print have a significance and importance that spoken words do not carry.
But often, this printed word online means far less than spoken word in person.
Social Media carries with it a meaning beyond its real import, call it the "Forum Effect."  The Forum Effect comes from online business forums such as ones for games.  These forums can be very busy and loud, and can carry quite a lot of importance to companies.  The problem is that only a very small portion of your customers ever care enough to even look at the business forums.
And further, of those few customers, only a few ever bother to post on the business forums.  And if you look at these, you'll spot a very small group of names who post a lot and then a large number of scattered people who post once or twice, ever.
So what you see on the forums are the most intensely dedicated and concerned people who represent about .1% of your customer base.  But they are very passionate, and businesses will often pay heed to these people as if they represent a significant portion of their customer base.
Online its all like that.  Only some people bother with posting, and not many do it very often.  Some are rabid and post all day.  So if you get 10 comments by 10 people telling you your idea is stupid from a customer base of 80,000... who cares?  But when those commenters post 99 times each, suddenly it seems like you have a huge number of angry people you best respond to.
Your Direct Message bar is full!  You got 90 tweets in the last hour!  Look at all those Facebook comments!  People are outraged!  We have to act!!!
But the truth is, its the Forum Effect - tiny numbers of very passionate people that seem significant by their intensity.  If those 10 people gathered outside the office of your business and held signs up all day, you'd laugh at them.  But those 10 people tweeting you 10 times each makes it seem suddenly horrific.
Its odd to watch, and I wonder how long this will keep happening.  I know there are people who deliberately use this effect to try to sway policy.  Newspapers in Australia again were influenced on stories and reactions to events by a campaign director having his volunteers hammer twitter and facebook with a specific message (the Obama administration does the same thing, in fact their Organizing For America website has people working on it that specifically troll the internet for anti-Obama commentary and react to it on the sites). It worked to manipulate the press - not the election, in Australia at least - but the press responded to the pressure.
This probably won't keep working forever, but for the immediate future, it certainly seems to, as businesses are under the impression that social media is the biggest and most important public image and advertising structure on earth.
Maybe they're right, social media matters enormously.  But I remember well in 1998 or so when every business thought having a website meant instant millions and free advertising so they spent a fortune building a new nifty website.  By 2000, they'd figured out that few if anyone actually went to these websites, and nobody really cared about it unless the site had something important or useful on it.
I suspect social media is the same way.  Does Mountain Dew's Facebook page really help their sales?  Does Toyota's Twitter feed really return their investment?  I doubt they're making as much in new sales as its costing them in social media experts and professional tweeters.
Posted by Christopher R Taylor at 10:43 AM