"What the hell are you worried about? This is 1874. You'll be able to sue her."
-Blazing Saddles

There was a tremendous amount of fascinating activity going on behind the scenes during WW2 and right before it.  The book A Man Called Intrepid is full of details and amazing bits of information from the time period.  One particular story is of interest, and it was in an email forwarded to me by a friend.
In the 1930s, the possibilities of radio were being first explored for what could be done with this new technology.  The concept of radar was out there and its first, rudimentary systems were being developed.  The Americans had the best radar, and they shared that tech with the British, which made it possible for the British warplanes to always mysteriously be where they were most needed during the Battle of Britain.
Radio was also being experimented with for sending secret information.  It was known that you could in theory get a device to obey commands sent over radio, but the exact process of getting this done was unknown and difficult.
One Austrian scientist named Friedrich Mandl was the head of Austria's biggest weapons manufacturer.  He would attend dinners with his beautiful young wife Hedwig and leaders of the German and Austrian fascist movements.  At these dinners, he would talk about his company's latest developments in radio controlling missiles and torpedos, and the technology involved.  Young Hedwig was so lovely and seemed so shallow she was ignored, as she listened and learned everything being said.
Hedwig wasn't a fan of Nazis, and she wasn't fond of her husband's weapons business, so much so that her annoyed husband locked her up in his palatial home Schloss Schwarzenau.  However, Hedwig managed to escape dressed as a maid in 1937 and made her way out of the country to Paris and then to London.
In 1938, Germany annexed Austria, whose people willingly joined Germany.  The German government seized Friedrich Mandl's company because he was a Jew and nationalized it, and Mandl himself had to flee to Argentina where he eventually became an adviser to Juan Peron.
Hedwig meanwhile resumed her film career.  She'd starred in a little European movie about a bored wife and her fantasy life and had a nude scene in it, along with a few other controversial scenes.  It had been released in 1933, when she was then 18 years old. Louis B. Mayer met with Hedwig Mandl in London and signed the young woman to a long term contract.
Meanwhile, however, she was busy.  Although beautiful and easy underestimated, Hedwig was a genius, and she'd understood her husband's talk about radio control better than he had.  In fact, she understood it so well that she created and patented a system that worked to remotely control weapons.
Her basic understanding of the technology was being followed through by the Germans, and by the 1940s they had a working system in place.  The problem was that it could be jammed, something that had probably come up in the conversations at dinner.  A jammed radio signal meant no control.
Hedwig at another dinner party met a talented musician and inventor named George Anthiel who had been experimenting with synchronizing player pianos to create symphonic pieces harmonizing different pianos at once.  His system had been complex and innovative, and the results were quite impressive, although a bit too modern for my taste.
Discussing how it was done and a certain radio control issue, Hedwig and George got together and worked out a method for the radio control and receiver to automatically hop to another frequency if jammed, without losing contact.  By then Hedwig had remarried to Gene Markey, An American producer and screenwriter.
On August 11, 1942, U.S. Patent No. 2,292,387 was granted to Antheil and "Hedy Kiesler Markey", giving the system for making this frequency hopping technology possible.  This technology was initially opposed but then later developed further by the US Navy, and by the Cuban Missile Crisis in 1962 was part of US weaponry and communications.  This technology became standard for any radio system that searches for and moves to different frequencies.
Such as your cell phone, for example.  Any time a signal is weak or too cluttered with interference, it will go find a better one and you (usually) don't even notice the change.  Your wireless computer and other gadgets all use this technology. It lies at the heart of fourth-generation "LTE" wireless technology.
Hedwig was honored in 1997, when the Electronic Frontier Foundation gave Lamarr a belated award for her contributions.[4] In 1998, an Ottawa wireless technology developer, Wi-LAN Inc., acquired a 49% claim to the patent from her for an undisclosed amount of stock.
Oh and Hedwig?  You probably know her under a more familiar, famous name, the name that Mayer changed hers to: Hedy Lamarr. 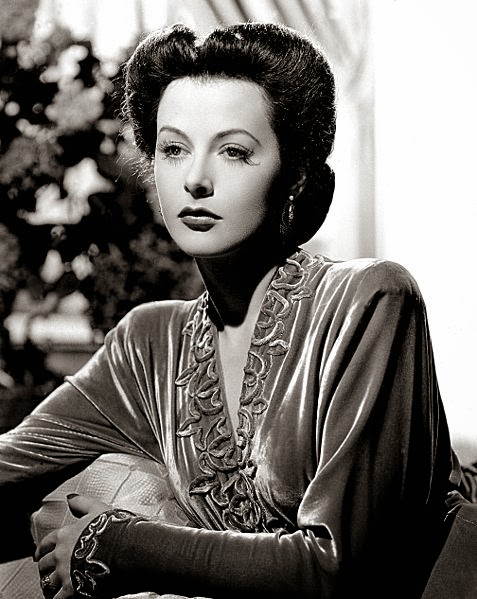 Lamarr made 30 films with MGM, including White Cargo, Samson and Delilah and My Favorite Spy.  Her beauty and sophisticated looks made her famous as "the world's most beautiful woman."
She had wanted to join the National Inventor's Council in the 1940s, but in the end decided she would be more useful to the war effort by selling war bonds as a famous actress.  Hedy retired from film in the 1960s and spent the remainder of her life in quiet seclusion.  Her ashes were scattered in the Vienna Woods upon her death in 2000.
Posted by Christopher R Taylor at 9:39 AM