"I've often said there's nothing better for the inside of a man than the outside of a horse."
-Ronald Reagan 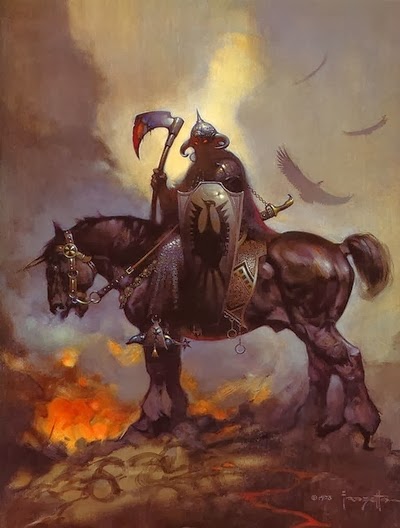 I write fantasy.  I'd say for a living, but that implies enough earnings to survive on and that would be a slight exaggeration, like saying a AA battery can run Las Vegas.  But its something I have been doing for several years now, and I have a couple of books under my belt.
The strange thing is, I don't read a lot of fantasy.  I don't like much, most of it is pretty forgettable or the world doesn't appeal to me.  Too much of it is just awful, the kind of earnest nonsense that makes the genre a point of mockery for many people.
Something that often comes up in fantasy books and especially games is the horse.  Its a good old fashioned way of getting around; humans have been riding about on horses for thousands of years and they work well.
The problem is in the modern culture, almost nobody has more than a vague familiarity with actual horses and their nature.  And worse, being so influenced by modern culture, writers presume things based on their experiences that are nonsense.  I'm no expert on horses, but I do know some about them through limited experience and study with folks who are experts.
To begin with, horses aren't cars.  I know that sounds kind of obvious, but for some reason when it comes down to fantasy stories, authors seem to forget this.  Picture the scene with me now:

Cronan brought his steed to rein, its steel-shod hooves sparking on the rocks as it abruptly pulled to a halt.  The sun shone through the leaves of the canopy overhead on his broad, muscled shoulders as Cronan slid off the horse and looked around him.  This had to be the place the crone had mentioned, a cave with an entrance like a screaming mouth, filled blackness suggesting death and fear.  The vines overhead were growing low, hanging across the entrance as he strode inside, brushing his long black hair.  No darkness would stop his mighty sword from finding a sheath of vengeance in the lich this day.  He knew it could take him days of searching in the Labyrinth of Fell Desolation, but no matter how long it took, he would take his revenge.