"Editing and rewrites are mildly annoying, but its from that point on that its downhill."


I have started posting a lot about writing in the last few years, for a couple of reasons.  First, I'm writing novels, and in the process I think of things that develop into posts.  Second, it seems like nearly everyone is writing books these days, so its a topic of interest to people.  And third, the blog here is about stuff that interests me, and writing interests me, so it gets posts.
How much people appreciate or are interested in it, I can't say, but one post I did on writing quite a few people took an interest in.  The idea for the post was launched by a quote about writing being easy, you just cut a vein and bleed on the page.  Nobody is sure who said it first (Probably Walter "Red" Smith), but it is a popular quote.
And I noted that's just nonsense.  Writing is the easy part.  Selling books is the hard part.  I can write  a book in about a month, but it takes about a year to get it on the shelf all told, and then I have to figure out a way to get people to even know it exists, let alone purchase one.
And that segued into how sales are down for books (despite having more writers than ever), and how publishers are struggling to stay alive.  And I then postulated ways that publishers could stay open and be in business.  And that's how the post The Bloody Part of Writing came into being.
It was pretty popular, being linked on several major sites, was passed around on facebook and other social media sites, and was emailed about.  I still get hits on it occasionally.
That's how a lot of my posts happen.  I have an idea and a followup, something to tie it to current events, and then ideas occur while writing, which expands the post even more.  Usually while I'm writing I have notes at the bottom which I use to keep track of thoughts I have in the middle of a sentence.
Not long ago, the New York Times had a piece which half joking suggested that print could stay in existence by rebranding its self as a specialty boutique item, like coffee and absinth did.  The thing is, they're exactly right.
This poorly drawn cartoon ran with the article: 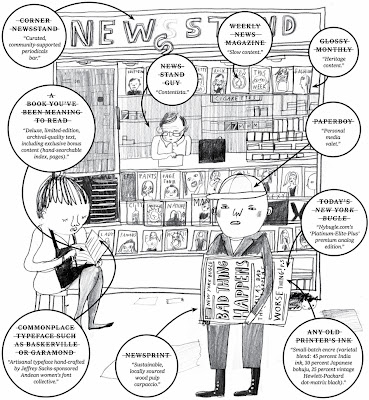 And while they are being somewhat satirical, they agree with the content of my Bloody Writing post.  Turn the book into a luxury item, a print-on-demand source of reading and charge more as a specialty, and you can stay open as a publisher.
Of course I had a lot of other suggestions, such as publishers shifting to PR and consultants to authors rather primarily than content producers, and ideas for how bookstores could stay open, but this bit does hit one primary part of the piece.
The problem is publishers had so much power and control for so long, and have become so entrenched, isolated, arrogant, and controlling that they simply do not seem to be able to change with the times.  What is needed is a smart young rich guy with lots of energy to reboot the industry.
Because the book business as we know it isn't going to be around by the end of the next decade. the way things are going, and I'd hate for these businesses to just crash and burn out of stupidity and arrogance.
Posted by Christopher R Taylor at 9:30 AM