This is a piece I posted a few years back that focuses on some of my concerns with law enforcement "stings" that look a lot more like attempting to create crime rather than stop it.

"Any plan that starts with, 'First, we have her take her top off. Then we tape her sunbathing all week' must have had a lot of volunteers." 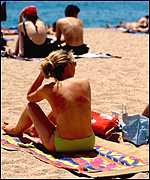 In the past I've pointed at the evils of abusing children and pornography, the horrors of little girls used for sex and the industry in general. I've condemned preying on people on the internet, which I suppose sets me apart with the 99.999% of humanity who opposes these things. Yet there's an aspect to modern life that disturbs me in the way law enforcement is approached. There is a popular television show on right now called To Catch A Predator that shows real life episodes in which the show chats with adults while pretending to be children, then sets up a meeting with them, and the cops show up to arrest them.

Now, I'm all for busting scum who prey on children, I think they are monsters that should be beaten within an inch of their lives and thrown in prison forever. My problem is with the very concept of setting people up to deliberately throw them in prison. Its one thing to arrest people for doing bad things, it's another entirely to encourage them into doing bad things in order to arrest them.

Remember the forgotten wallet sting I posted about a few weeks ago, where cops left a purse or wallet out then busted people who didn't go to them with the item? Here's a few other examples of "stings" of this type.

In Thousand Oaks, California (near Los Angeles), police put an unlocked car full of newly purchased Christmas presents in a parking lot and watched it:


It wasn't like police weren't trying to make it as enticing as possible: They left the car's trunk open and car windows down at times. The vehicle was left outside of Best Buy on Moorpark Road, the Janss Marketplace and The Oaks mall.

The stuff left in the car was worth enough to trigger a felony charge if anyone took the bait.

Nobody did. Some locked and closed the door. Some found the cops and told them. Some told mall security. People just wouldn't play along. Here's another example, a bit more risque:

Robin Garrison, an off-duty 42-year-old firefighter, was walking in Berliner Park in Columbus, Ohio, in May when he saw a woman sunbathing topless under a tree.

He approached her and they started talking and getting comfortable, the woman smiling and resting her foot on his shoulder at one point.

Eventually, she asked to see Garrison's penis; he unzipped his pants and complied.

Half naked women? No problem. Man whips it out when asked to by a beautiful topless woman who's fondling him with her foot? Call the cops! Who is the pervert here again? At Protein Wisdom Darleen highlighted these cases and a morality lecture at a college, pointing out how society is confused on the topic (to put it mildly) noting the problem with these stings:


The major fallout of poorly conceived and executed stings is the increased distrust of, and cynicism towards police. And not just police, but to even the concepts of private/public behavior and property are questioned.


Darleen's point is that when law enforcement acts in unwise or improper ways to arrest bad guys - or at least guys who if a clever prosecutor is involved can be shown to have technically violated the letter of the law - then the general public loses it's way morally and is unsure how to behave. Find a purse, take it to the lost and found... and find yourself arrested. Weren't you doing the right thing? Not when the cops are working a sting deliberately trying to generate crime and thus arrests. So how are we to behave? Apathy toward your fellow man seems to become the proper response, but then there are laws that jail people for not helping out when they can - as shown famously in the last episode of Seinfeld.

Yet the entire point of that discussion is perfect for the original writer's point: because the RIAA is acting so insanely overprotective and greedy, people feel justified in ripping them off. Because people are ripping them off, the RIAA feels justified in acting the way it does. In essence, each side is using the other's ill behavior as their reason for how they act. And the cycle becomes self-feeding, with each side condemning the other and losing their way entirely from an ethical perspective.

The problem we're facing is that without a shared, absolute ethical basis for behavior, without society agreeing upon right and wrong based on one standard, we're left with trying to force moral behavior by rule of law. Where this fails is that law cannot encourage moral behavior, it can only punish some immoral behavior. So when you lose that central pillar that holds up the canopy of morality over a culture, you lose all sense of right and wrong and are simply reduced to legally actionable.

Without that guide, nobody is sure how to act, and the law enforcement community loses their direction and purpose as well.  Cops who don't understand the ethical basis and spirit of the law they are supposed to enforce end up with jobs like placing things out hoping people steal them. And the culture suffers as a result: we lose not just morality, but law its self.
Posted by Christopher R Taylor at 6:36 AM