THE FIRST TO FIGHT

“Poland should be strong and prosperous and independent and play its proper role as a great nation in the heart of Europe."
-George H. W. Bush 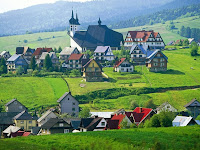 Today, Poland is a free country that holds America, and especially Ronald Reagan along with Margarget Thatcher, in extremely high regard.  The consider the USA the most important force in their eventual liberation from Communist dictatorship.  They love the free market, having lived under the crushing darkness of socialism for decades enjoying its full reality.  Poland, for example, has a flat tax (like most of Eastern Europe).
Poland has not yet recovered to its heights of cultural, literary, and scientific glory it held before WW2.  Poland was truly a world power to be reckoned with, a source of music, art, literature, and especially chemical advancement then.  The Nazis almost succeeded in obliterating Polish culture and identity.  The thing most people in the west associate with Poland now is Polack jokes, Solidarity, and a pope.
Poland is a very beautiful country and I would love to one day visit, although I don’t see it happening on this earth.  The people there will recover, eventually, from the half-century horror they were put through.  And I wish them all the best.  Just give the Polack jokes a rest, okay?
Posted by Christopher R Taylor at 9:29 AM