ITS A MAN'S WORLD?

"It was always the proper mission of feminism to attack and reconstruct the ossified social practices that had led to wide-ranging discrimination against women. But surely it was and is possible for a progressive reform movement to achieve that without stereotyping, belittling or demonizing men."
-Camile Paglia

Something interesting happens to most women when they get married and have a boy: they change their perspective on men.  I think its not unreasonable of girls to get a certain grrl power men-are-dumb point of view in modern culture, we're constantly bombarded with this message.  It would take a pretty strong and unusual girl to resist the education that music, film, television, books, and education all imprint on her.
In college, young women are told all men are rapists at heart, and their denials is simply proof of the rape culture that menaces women constantly.  Advertisements continually portray men as hapless idiotic children.  With few exceptions, television shows almost always show the male characters as barely-literate frat boys and cave men.  Music and movies promote the image of the all-powerful kung fu genius girl who looks hot constantly and always has the right put down to make men look bad.
But when a woman marries, she finds out guys aren't all like that.  Her husband has her faults, but strengths as well - or why would she love and marry him to begin with?  She finds out that he's no more immature and childish than her, just in different ways.  She learns that men have strengths and abilities that women lack, just as they lack things women have.
And when she has a son, she sees things from a different perspective.  That shirt that was so cool and empowering that said "Boys suck throw rocks at them" when she was 12 seems horrible and abusive when her son is the target.  She finds out that her school treats boys as if they are some awful imposition that need to be drugged into submission and silenced in class.  She learns that all the girl-power stuff she grew up with was at the expense of the boys.
But with a culture that so strongly tries to repress and shunt aside boys and treats men like knuckle dragging brutes, its even tougher for a boy to grow up as a man.  I feel for the boys of today in school where they learn they should shut up and stop being masculine, that its awful and wrong to be a man and beautiful and good to be a woman.  Growing up in the face of that can't be easy.
There are places where this isn't as much of a problem, of course.  Rural areas tend to raise men from boys because they still have to man up and face life.  They are expected to overcome challenges and provide.  Yet those boys are in the minority, and they still face these pressures.  Boys are not just being challenged to grow up to be men, they're being discouraged from doing so.
And we're going to need those boys to grow up to be men.
Camile Paglia is one of those leftist thinkers I admire most of the time.  Like Christopher Hitchens and George Orwell, Paglia is able to think past her politics and ideology to see things rationally even when they challenge or oppose what her side tends to say.  Like Hitchens and Orwell, she has her blind spots - as do we all - but one of her biggest targets is modern feminism.
In a recent piece called It's A Man's World, and It Always Will Be for Time, Paglia writes:


A peevish, grudging rancor against men has been one of the most unpalatable and unjust features of second- and third-wave feminism. Men’s faults, failings and foibles have been seized on and magnified into gruesome bills of indictment. Ideologue professors at our leading universities indoctrinate impressionable undergraduates with carelessly fact-free theories alleging that gender is an arbitrary, oppressive fiction with no basis in biology.

As the saying goes, there are some ideas so stupid only an intellectual can believe them.   Paglia goes on:


History must be seen clearly and fairly: obstructive traditions arose not from men’s hatred or enslavement of women but from the natural division of labor that had developed over thousands of years during the agrarian period and that once immensely benefited and protected women, permitting them to remain at the hearth to care for helpless infants and children. Over the past century, it was labor-saving appliances, invented by men and spread by capitalism, that liberated women from daily drudgery.

What is troubling in too many books and articles by feminist journalists in the U.S. is, despite their putative leftism, an implicit privileging of bourgeois values and culture. The particular focused, clerical and managerial skills of the upper-middle-class elite are presented as the highest desideratum, the ultimate evolutionary point of humanity. Yes, there has been a gradual transition from an industrial to a service-sector economy in which women, who generally prefer a safe, clean, quiet work environment thrive.

And as I've written several times in the past, the world we now live in is one which women rule.  Women won the battle of the sexes, and they've managed to craft a civilization which fits their life and desires most closely.  The strengths men tend to have are nearly useless in this modern world, but the strengths that women have tend to be dominant and most in demand.
Women have done their job as civilizers, and the result is that now men have to strive to find more difficult, elusive ways to be masculine and productive.  There are still those high-risk, industrial type jobs like oil well rigger and king crab fisherman that are men-only positions, but for the most part they are outliers, rarities in modern society.
But as Paglia points out, this is temporary:


The earth is littered with the ruins of empires that believed they were eternal.

After the next inevitable apocalypse, men will be desperately needed again! Oh, sure, there will be the odd gun-toting Amazonian survivalist gal, who can rustle game out of the bush and feed her flock, but most women and children will be expecting men to scrounge for food and water and to defend the home turf.

Its been a very long time since the last civilization-destroying catastrophe took place.  We haven't had a massive plague or immense disaster that sets culture and technology back by generations for nearly a thousand years.  Its been a good run, it put us on the moon and gave us the internet you're now reading.  But it won't last.
I suspect we're on the cusp of one of these events, one almost entirely man-made and by our own doing.  And when that time comes, when the disaster hits, most of the people who die and suffer will do so out of sheer ignorance.  How do you get food when the supermarket shuts down?  How do you heat your house when the gas shuts off?  What will you do when your neighbors suddenly decide they need your pantry more than you do?
Its great living in a civilization where we don't have to fight and kill to survive.  It is ultimately preferable.  I would not do well in a barbaric society, a weak scribe and illustrator.  But barbarism is the default setting for humanity, for as long as we've been on this earth, it has been the greatest bulk of our experience and history.
For women to act like that can't ever happen again, and that we'll never, ever need men - that men are the cause of evil and wrong - is suicidally idiotic.  And honestly, deep down, I suspect there are very, very few women who prefer men be the emasculated wretches they've tried to turn us all into.
*UPDATE: Is this really the kind of man that modern women want, or just the kind that a certain sort of ideology promotes? 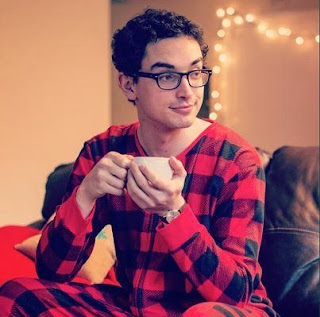 Yes, that's pajama boy from the latest Obamacare ad. Maybe a perfectly nice guy but who's going to chop the wood?
Posted by Christopher R Taylor at 12:34 PM