"Bear with me a moment, this is going somewhere." 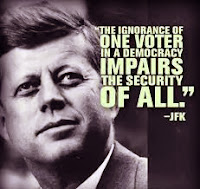 I think that is an excellent analysis. Popular culture is all some people know. They think they are geeks because they can get an app on their smartphone or because they watch "Big Bang Theory".

Two comedy shows Colbert and Stewart are, by my observation of dumb people encountered in everyday life, hugely influential. The power of ridicule from a charismatic comedian that can carry some inferred substance with their yuk yuk, really does lead the simple and the gullible.

What to do about it? Limited government, you know, like maybe constitutionally, and keep the power in the hands of the individual, even the stupid ones.

Clearly government is not where we must look for the answers.