"For your Christmas shopping consideration"


While Black Friday is the biggest shopping day of the year in stores, Monday following is the biggest online shopping day, so they say.  I never know whether to really believe any of this, it all gets hyped tremendously and I'm sure someone did a study but the truth is often stranger than statistics.
In any case, if you're considering buying a book for someone for this Christmas, I'd like to offer you mine as options.  I like them both quite well and so do the people who've read them.
SNOWBERRY

My first book is Snowberry's Veil, although it was recently re-released.  The tale of Erkenbrand, a ranger for the king of Morien, it follows his adventures as he tries to protect a caravan of settlers traveling through the wilderness to new lands opened for homesteading by the king.  Erkenbrand soon finds himself chased through the wilds, stripped of his best equipment and living on his wits and skill at survival.  He befriends creatures along the way, bests terrible monsters, fulfills several quests, and rescues his lady love, all the while uncovering a terrible evil.
Snowberry's Veil is a small scale fantasy adventure, not a sweeping epic, and reviewers took to it quite well:

Christopher Taylor's first, self-published novel is an imaginative story about a forest ranger/explorer who perseveres amidst dangers such as beastmen, human degenerates, strange hybrid forest creatures, and a harsh, wintry environment. The novel is at its best when the characters are actively engaged in an adventure, and the story is especially gripping when such adventures lead to heroic battles and confrontations. It is clear that Taylor has raw talent as an author. His characters are well-rounded, his descriptive ability is impressive, and his creativity in imagining the world of his story is evident. With a little more practice and polish, Taylor has the potential to be among one of the better fantasy writers of our time.
It seems clear to me, at least, that Taylor is influenced heavily both by the Middle-earth world of Tolkien as well as the world of talking animals, chivalry, and spirituality of C.S. Lewis's Narnia Chronicles. What's interesting is how successful Taylor is in blending these two worlds together.
-James Huck

If I ever needed to explain to someone what role playing games were all about, this book would be a perfect addition to that explanation.
It's a story of one man's adventure in a world where magic exists. The writing is both clear and interesting and the story plausible for the world in which it exists.
-Paul Walker

Like the author mentions this book is not about world-shaping events, but something you could typically imagine happening in a day to day fantasy adventure.
This is a fast-paced read with humor and action springing from the author's detailed world setting. Careful reading rewards those who like to become immersed in an author's imagination. I can see many adventures in the future for the Ranger of this title.
-Nicholas Young

Christopher Taylor has written an engaging fantasy novel that weaves together a couple of different storylines into one enjoyable novel. Taylor is a creative writer who brings the reader into his own world -- and you can't help but enjoy what you see. There were a couple of parts that were a little slow, but overall, the story carries you along. His use of language and descriptive words also helps keep the plot moving. If you enjoy fantasy, you'll enjoy Snowberry's Veil.
-Robert Toornstra 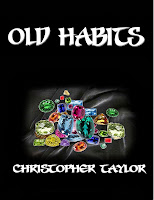 The second book is called Old Habits and its been out for a few years now.  A slightly longer story, this covers the misadventures of the thief Stoce.  He lost his treasure, is chased by assassins, is caught up in a plot to take over a castle, has to deal with wizards and a paladin, and finally finds a greater treasure than he lost.  Only an exceptional thief could face these trials, and Stoce is up to it.

I had a lot of fun writing this book, especially playing with language and creating the "thief's cant" that Stoce uses.  And readers seemed to enjoy it as well:

Do our circumstances determine whether we're doomed to evil, or can we choose otherwise?
This story deals with one man's journey from potential damnation to possible salvation.
Well written, and plenty of action at a decent pace.
-Paul D. Walker

Good characters and a good pace. I enjoy first person narratives as it makes for better second readings. It's an interesting world and I hope to see more Stoce stories.
-David McKinnis

As I read Old Habits, I kept flashing on Heinlein - Taylor's fiction be-bops along with an easy wit and droll connivance that hark back to "the Dean".
The theme is a fine old one: a man on a quest. Like all good quests, the object he thinks he seeks is not that which he longs for, yet the search for one leads him toward understanding the other. Like one of Steinbeck's damaged knights, Stoce seeks his fortune, but longs for fidelity; he rescues women and children, but dares not voice his wistfulness for a home that only a wife & child can make. And under it all is a spiritual quest. The reach for a jewel that one may not be worthy of, the search for healing of a wounded soul.
The book rounds out and has a satisfying finale, but I was not ready for this story to be over.
-Tina

Old Habits at Amazon.com
Old Habits at Smashwords
now available at Barnes & Noble!
Or in print as a paperback:

Old Habits at Lulu
The paperback version of either takes about 10 days for the book to arrive.  And for the next couple weeks you can get free shipping!


Free shipping on up to 14 items

Set your shipping cost to $0 and go find something amazing. The coupon works on books, photo books and calendars.
Offer extended through Dec 15, 2013 at 11:59 PM
Use Code: FREESHIP
I'm not the world's greatest advertiser or promoter, so this isn't what you'd call slick and impressive and I apologize for putting a big fat honkin' ad on my blog, but this is part of what I do for money and it is some of my writing, so I figured some people might be interested.
*UPDATE: fixed the date of major sales.  Supposedly while Black Friday store sales were not very strong, online was up.  People are shopping at home more these days.
Posted by Christopher R Taylor at 9:40 PM

I hope they have a special at the urgent care today.