This piece is from June of 2011 about how states are starting to rebel against federal dictates, particularly in the form of the Sheriff.  Continuous federal overreach is causing some, especially in the west, to refuse to cooperate.

"As the chief law enforcement officer of this county, elected by the citizens, saddled with the expectation and responsibility to safeguard their rights, I fully intend to uphold the laws against any threat, inappropriate or unlawful actions against them." 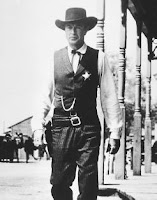 Not too long ago I got into a discussion with a leftist about Arizona's immigration laws in which he insisted it was illegal because state level law enforcement cannot enforce federal laws. As in, if its a federal law they are not permitted to bust people.

Now, if you've ever gotten a ticket for driving past the posted speed limit on a federal highway, you probably didn't get pulled over by a member of the FBI. In fact I can guarantee you didn't, because the FBI will not enforce that particular federal law, leaving it to the state, county, and local police.

That argument was simply absurd, and I think the lefty was making it based on a mistaken understanding of the Obama Justice Department arguing that states cannot pass laws that interfere with federal laws. Arizona is doing no such thing, they're just making it illegal to ignore federal laws in the state, but that's for another post.

What is interesting is that in Prinz v. United States (1997) the Supreme Court of the United States declared that the federal government cannot require state and local law enforcement to enforce federal laws and statutes. In other words, if they don't want to, they do not have to enforce immigration, speeding, or other federal laws, including drug laws.

Prinz vs US ruled that the Brady Handgun Violence Prevention act of 1993 (part of the reason many congressmen were shown the door in 1994) which required background checks on all gun purchases didn't have to be enforced by the states, who have sovereignty over internal law enforcement. That's basic federalism; the principle that the federal government has absolutely no power over the states except in the way they deal with each other and with foreign governments. This is really not in question, the 10th amendment of the US Constitution makes that pretty clear.

Now, most states do require background checks for gun purchases, something I don't have much problem with, but they do so voluntarily.

Which brings us indirectly to Oregon Sheriff Gil Gilbertson. Gilbertson works in rural western Oregon which is a heavily forested portion in the southern mountains. Josephine County has just over 75,000 people living in it, with 50 people per square mile living in the 1,639 square mile area.

Other than the I-5 corridor with Grants Pass and Cave Junction, the county has very few communities, and is mostly rugged mountains with massive pines and lush forest. And it is in these forests that the problems started for Sheriff Gilbertson. Sarah Foster writes at News With Views:

...when citizens of the county began coming to him complaining of “harassment” by U.S. Forest Service law enforcement officers (LEO), he said he’d investigate their concerns, figuring he could work things out with the local ranger district. After all, as the county’s chief law enforcement officer he was in the “club” and moreover had gotten along with the “feds” -- though he disagreed with their road closing policies and other efforts to keep the public off public lands which cover 68 percent of the rural county.

The Federal Forest Service told him to file a freedom of information act to get the information he asked for. Miners in the area had been complaining of harassment by Forest Service officials as well, and in nearby Grant County, Sheriff Palmer is facing the same sort of stonewalling from the federal government on information.

In particular the road closure policy of the federal government is of concern:


“We’re checking to see if things are being done appropriately according to the U.S. Constitution and the laws that govern all this,” said Gilbertson. “So it’s a process right now that we’re in the research phase. … I’m looking at doing all the research before I make a final decision.

Gilbertson also explained that for him the road-closing issue is a safety issue. “If I need to go Search-and-Rescue, or if I need to go look for crime or marijuana grows, I don’t need those roads closed; I need them open so I can get to them.

“You’re not supposed to take any vehicles onto certain federal lands. But guess what. If I’ve got somebody missing, if I need to take a helicopter in I will. That’s my authority as a sheriff and I’m not going to let anyone stand in my way to protect the people of this county.”

Oregon has already suffered significantly from poor forestry management, in particular the recent Biscuit Fire which took place in a wilderness area, where the federal government banned flying helicopters to dump water or fire retardant chemicals. 500,000 acres of the Siskyou National Forest burned. The same thing is happening now in Arizona.

President Bush signed legislation and issued executive orders allowing more logging of underbrush, dead trees and thinning in national forests to help prevent huge fires, but this has faced constant opposition from the left and President Obama reversed the policy when he took office. Forest management and researchers know that thinning can help prevent entire forests from being wiped out by fire, but lefty environmentalists would rather lose the entire thing than let a few trees be cut down by loggers.

How significant or strong this movement is I do not know, but the states appear to be getting very close to saying "we've had enough," just like the Tea Party Movement shows that many individual citizens have as well.

Western states such as Oregon, Arizona, Nevada, Montana, Wyoming, and so on have been especially ill-used and disregarded by the federal government for more than a century. Leftists like to point to stats showing so much federal money pouring into these "red" states, but almost all of it goes to federal lands, military bases, and forests, instead of the actual citizens there - in other words, its not going to the states at all, its going to maintain and fund federal interests within those states.

For a long time western states have been disgruntled at best with the federal government's actions in their borders, and maybe that's moving up to a higher state of annoyance.
Posted by Christopher R Taylor at 7:00 AM