"Lord I believe, help my unbelief!" 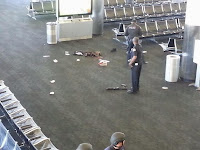 There's been another one.  A man opened fire in Los Angeles International Airport (LAX) with what looks to be a Ruger Mini 14 while wearing camo clothing.  A TSA agent was killed, while three others were injured plus the shooter, who was shot and arrested.
Like previous shootings, this has caused a great deal of discussion and debate over weapons, mental illness, security, and what's happening to our society.  How should a Christian respond to this and other similar events?
The first thing to do, I believe, is to avoid the knee-jerk or defensive response.  Its too easy to start yelling at each other over various unrelated or barely-related issues when something like this happens.  If you are interested in greater gun control, this is easy to use to argue your position as proof.  If you are against gun control its easy to try to find something else to focus on and become defensive and upset about the use of it to control weapons.
We also need to avoid jumping to conclusions.  The first thing I thought of was "man, I wonder if he's a pot smoker like the last 10 guys who did this kind of thing?" which was not charitable or proper.  People are claiming it was an "assault weapon" which is a nonexistent weapon category - it appears to have been a semi-automatic* rifle, not an assault rifle of any sort.   Nobody really knows exactly what happened there, not even how many shots were fired or the exact weapon used.
We don't know what his motivation or thought processes were.  We ought not presume anything about the incident, and should avoid certain conclusions.
Christians should first and foremost be concerned for the victims of the incident and their families.  The TSA agent has parents and probably siblings, aunts, uncles, and so on.  They might be married and have a family of their own, and those people need our prayers, not angry arguments.
We also, as distasteful or difficult as it may be, need to pray for the shooter.  Something is clearly wrong with him and he needs the grace of God.  His only real hope may be prayer and salvation, because whatever the motivation of this young man, he's not right.
As Christians, we should also be praying for society around us.  Something is terribly wrong with our nation and culture if this seems like a reasonable and proper thing to do for anyone, let alone every few months.  This nation needs a revival of the word of God and fear of the Lord.  This nation needs a heart of meekness and service, of love and justice, which it so dearly lacks.  So we need to go before God as priests and intercessors for the country, on our knees, to reach out to the almighty in love and concern for our fellow countrymen.
And as Christians, we should be praying for ourselves.  Not only do we need to wonder how much our rhetoric, how much our behavior, and how much our actions have failed to honor and glorify God - for this leads the world to think ill of our Lord or fail to show him respect - but we need to consider how much of that evil is in our hearts as well.
Have we done that which has misled people?  Have we failed to live as salt and light in our world?  I know I have failed in this, and I challenge everyone reading this to consider the same thing, for who of us can cast that first stone?  Have we been loving and been servants to each other?  Have we been just and merciful and God-honoring?  How can we expect the culture to change around us if we do not show them how and what to do?
And look in our hearts.  Its easy to stand like the Pharisee and decry such an evil act.  Thank God I'm not like him, we think.  But we should instead be beating our breast and crying out to God for mercy to us as sinners.  Who among us can claim we are without sin?  Any sin at all is sufficient to plunge us into punishment as Peter teaches us, like a single link in a chain above the fiery wrath of God.
So we must cling to the cross and rely on His mercy and justice, for Christ alone is our salvation and Christ alone is our surety before God.  No day goes by without our sin pushing us away from God, and not a day goes by that we are not still saved only by the doing and dying of Jesus Christ.  It is God's glory we see, not our piety.
Each time such a situation comes up, the place we belong is on our knees, not at our keyboards shouting and fighting.  We should be a beacon of God's love and hope for others to see and consider, if only in their hearts.  Let us as Christians be the voice of concern and care for the terrified and hurt people in the airport, the voice of love and light.  God be with us all and have mercy on us.
*This is part of the Christian Response series.

*Semi-automatic indicates a weapon which fires a single round each time the trigger is depressed, without needing to be reloaded or cocked in any way (like sliding a bolt or pulling back the hammer).  It doesn't fire multiple shots with each trigger depression, that's fully automatic.
Posted by Christopher R Taylor at 12:42 PM