"Look something up on Google or ask Siri a question on your iPhone, and you’ll often get back tidbits of information pulled from [Wikipedia] and delivered as straight-up fact" 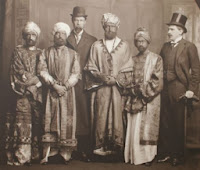 I've written a few small bits for Wikipedia, and edited some things in the past.  Most of the time I don't care but some bits are written with some mistakes or confused information and some are lacking bits that should be added in.  I try to resist editing bias away because its probably not going to stick; they'd just call it my bias.
I couldn't resist once, though.  On the entry for Mormonism, the wikipedia article stated that Mormonism "is Christian" which is not true.  While Mormons consider themselves Christians, almost no Christian agrees, and since the Mormon church rejects some fundamental Christian doctrines, you cannot state flatly in an encyclopedia that they are Christian.  So I edited it, to say that Mormons "consider themselves Christian."
I mean, if a bum living under a park bench considers himself to be a member of congress, that doesn't make it so.  The edit was reversed and I got a nastygram from someone in Wikipedia telling me that edits for bias weren't allowed and that it was hateful or some such nonsense.  I just shook my head and moved on.
There's been a lot said about Wikipedia's accuracy, and almost all of the criticism is accurate.  But it seems that for a while now, its not even a mass encyclopedia, either.  You really can't edit or add stuff to it much.  Sure, if you're one of the anointed official editors you can, or some celebrity or special interest group you'll get your say, but other than that, editing is basically impossible.
At the MIT Technical Review, Tom Simonite wrote about this (courtesy American Digest):

Yet Wikipedia and its stated ambition to “compile the sum of all human knowledge” are in trouble. The volunteer workforce that built the project’s flagship, the English-language Wikipedia—and must defend it against vandalism, hoaxes, and manipulation—has shrunk by more than a third since 2007 and is still shrinking. Those participants left seem incapable of fixing the flaws that keep Wikipedia from becoming a high-quality encyclopedia by any standard, including the project’s own. Among the significant problems that aren’t getting resolved is the site’s skewed coverage: its entries on Pokemon and female porn stars are comprehensive, but its pages on female novelists or places in sub-Saharan Africa are sketchy. Authoritative entries remain elusive. Of the 1,000 articles that the project’s own volunteers have tagged as forming the core of a good encyclopedia, most don’t earn even Wikipedia’s own middle-­ranking quality scores.

The main source of those problems is not mysterious. The loose collective running the site today, estimated to be 90 percent male, operates a crushing bureaucracy with an often abrasive atmosphere that deters newcomers who might increase participation in Wikipedia and broaden its coverage.

What the gender of the workers has to do with anything one can only speculate about, but the problems are very real and very present: a small core of very zealous people work quite hard to make Wikipedia be what they want it to be.  And in many organizations, the craziest and/or most shrill tend to be the ones in charge, even if they have no official position.  That always hurts any volunteer group because you can't throw them out or penalize them, really.
Yet Wikipedia's very nature - its open editing process - is also its greatest weakness.  I used to demonstrate to people how untrustworthy the site is by editing an article to include them in some insulting manner, then linking it to them.  Yes, Wikipedia officially says that you smuggle lemmings in your socks to Pakistan for rituals to summon Cthulhu, at least until the edit is caught and fixed.
A major example of this weakness was recently discovered, more than five years after being originally posted.  Kevin Morris at the Daily Dot explains:

From 1640 to 1641 the might of colonial Portugal clashed with India's massive Maratha Empire in an undeclared war that would later be known as the Bicholim Conflict. Named after the northern Indian region where most of the fighting took place, the conflict ended with a peace treaty that would later help cement Goa as an independent Indian state.

Except none of this ever actually happened. The Bicholim Conflict is a figment of a creative Wikipedian's imagination. It's a huge, laborious, 4,500 word hoax. And it fooled Wikipedia editors for more than 5 years.

Fooled them so much that they nominated it as a "featured article" in 2007.  And that's not the only example:

A half-decade sounds like a long time. But while impressive, seven other Wikipedia hoaxes have actually lived longer. These include an article on a supposed torture device called "Crocodile Shears" (which persisted for six years and four months) and one on Chen Fang, a Harvard University student who, intent to demonstrate the limitations of Wikipedia, named himself the mayor of a small Chinese town. It took more than seven years for Wikipedia editors to finally strip Chen of that mayorship.

And then there's the case of Gaius Flavius Antoninus, whose Wikipedia page described him as a perpetrator in one of the most famous events in history—the assassination of Julius Caesar. "He was later murdered by a male prostitute hired by Mark Antony," the Wikipedia entry told us. Antoninus, like the Bicholim Conflict, never existed. The hoax evaded Wikipedia's legions of volunteers for more than eight years, until it was finally uncovered in July, 2012, and similarly purged from existence.

That's the main weakness of the format.  Another main weakness is that people can and will edit stuff to lock in their political biases and beliefs into topics used by millions for research.  Don't care for someone?  You can smear them officially on Wikipedia and get away with it, for a while at least.  Some topics like the Iraq War, Benghazi, and Whitewater investigation of the Clintons are basically worthless for any information whatsoever.  And to make matters worse, the main people who are behind editing and choosing what stays or goes sometimes are these sorts of people.
Its long been known that you can't use Wikipedia for any really contested topic or hot issue.  Its best for things like how far away a planet is or the population of a city.  Things nobody has a strong feeling about and are easily researched.  I use Wikipedia quite a bit in my research, not as a primary source, but as a location to find sources, through the footnotes.  You can generally ignore the content, but the links are often useful.
Interestingly enough, many of the topics I write in my Common Knowledge series are solid and well-researched on Wikipedia.  I've rarely found the myths and flaws people believe unchallenged or promoted on these topics, even ones as controversial as McCarthy and the Red Scare.
But if the editors are trying to keep the main flaw (trolls and zealots editing things their way) from hurting Wikipedia, they're also keeping Wikipedia from being what it was originally designed to be.  Instead of being a completely free volunteer site anyone can add their knowledge and expertise to, its become a site controlled by a small number of volunteers which block anyone from touching anything especially in a way they don't care for.
Supposedly the site is working on updating the interface and changing how its made so that people find it easier and better to work with, but there's not much they can do about the editorial power people have.  And the internet is full of examples of how that plays out: often very badly.
And honestly, who really thought this would play out any differently?  It takes a spectacularly ignorant or naive person to think you can throw something completely open on the internet and get anything remotely reliable or useful for information.
Posted by Christopher R Taylor at 12:12 PM

Orson Scott Card was complaining a few years ago that Wikipedia wouldn't let him make a factual edit to his own entry. I don't recall the particulars, but it seems like it was something fairly indisputable.

I find Wikipedia interesting just to get a quick general idea about something that is unfamiliar to me or as a refresher for my memory.