"The teletubby that carries a handbag called and said you need to man up." 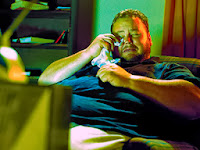 Recently a weatherman for a TV station tweeted that he broke down crying in an airport thinking about how awful climate change is and decided he'd get snipped to make sure he didn't help overpopulate the planet.
Now putting aside the science part of this, which I've dealt with plenty in the past, consider this.  A full grown man in a public place weeping because he read a news report about the weather.  Now, each person deals with upset and confusion in their own way.  We're all built differently in our emotions as well as the rest of us.  But this is just a pathetic display.
Its bad enough he felt compelled to tweet the world about his religious conversion sudden terror of weather, but weeping about it is just sad stuff.  I thought about this a bit and realized something that I've been so steeped in my culture I wasn't thinking through clearly before.
There's this assumption all my life (I was born in 1965) that I've heard again and again about men.  That they have to express their emotions more, be more willing to cry, etc.  Alan Alda was held up as some sort of model for masculine behavior in the late 70s and early 80s.
The presumption behind this is that if you don't express your emotions as a woman, you're flawed somehow.  Yet men have their own way of showing emotion, and that's different from women - surprise, surprise.  The way men express emotion is a man's way, and that doesn't make it wrong or odd, just masculine.
Its one more expression of a deeply troubled culture that assumes men and masculinity is bad while women are superior.  So a man bottles up his emotions more and shows them more privately, is that bad?  Some psychologists try to say so, coming up with all manner of speculated afflictions this causes.
But for thousands of years men behaved in a certain way without destroying themselves or humanity; its only recently that its been decided that men have to be more girly or they're just plain damaged.
When a man stubs his toe he yells and swears usually, or grits his teeth and growls.  When a woman does, she tends to cry.  That's different but not wrong.  When a man is hurt really bad he tends to keep it in and get more grim and quiet.  That's how men deal with things.
Part of this is what makes men superior hunters and gatherers.  You can't really succeed at stalking dinner or going into very dangerous areas if you're loud and demonstrative.  The fact that men are made differently than women is a good thing, and its beneficial to the world to have both sorts.
Its just frustrating to me that modern western culture is so destructive to basic masculinity.  And what its done to femininity in the process is just as horrid.  Because if a woman is girly and weepy, she's attacked for it.  Be strong, grrl!!  Let the men cry and wail.  Its just crazy.
Posted by Christopher R Taylor at 8:57 AM

Weatherman was gay. Depend upon it.

sorry it didn't work out.

Apparently Mr. Emotional is both heterosexual and married. His wife also supposedly expressed a very strong opinion about his plan to get a vasectomy and it wasn't supportive. He's reportedly decided against the idea.

It does seem like a silly reason to cry for. But emotions just kind of happen. They are not the easiest things to control. Some people are wired to cry more then others, their sex doesn't matter. It just happens.