VAN DUZER AND BEYOND

"Watch out when driving through vanduzer corridor.  The animals hide by the side of the highway in the bushes and make faces at you." 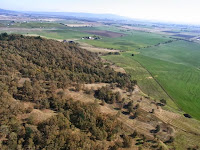 I'm at the Oregon coast again.  Each year I spend a week here, and while in the past I had to either front-load the blog to post while I was gone or have guest posts, the house has wireless and I can work here, too.  Last year I didn't mention anything but this year I think I'll do a sort of travel vacation blog instead of my usual think pieces and nonsense (you can decide which is which).
The trip over the mountains to the coast from Salem is a pleasant one, even if I've been over it scores of times.  It is about a 50 mile trip from Salem, Oregon to Lincoln City, Oregon, over the Oregon Coastal Mountains.

The trip runs along Highway 22 west through Baskett Slough.  This area is a bird refuge, and some time I'd like to take a look around it although I don't have the energy to walk around in it I once did.  The slough is mostly a field with swampy bits and large hills rising around it.  The ground was covered with white and black birds - geese, I think, they were too far away to see clearly - and the effect was like pepper scattered over the ground.  Covering almost 2500 acres of grasslands, forests, and swamps, the refuge was formed in the year I was born (1965) to provide the local birds with a place to safely live and breed as the Willamette Valley became more built up and farmed.
From there the route changes to highway 18 and the forests start up.  This area is up from the valley floor and is climbing into the Coastal Mountains.  This area used to rumble with logging trucks and still there is some activity, but these days its mostly just autos on their way to Spirit Mountain and further to the ocean.  Also called the Salmon River Highway, 18 is the most direct route to the Oregon coast and the casino at Grand Ronde
Built in 1995 by the Confederated Tribes of the Grand Ronde Community, Spirit Mountain is the biggest casino in Oregon.  Every year I see it, the place has grown by a building or two as it spreads and earns more money.  Native Americans from nine tribes such as Shasta, Kalapuya, Molalla, Chinook, Tillamook and so on banded together to get this built, and its bringing in a gigantic amount of money every year to these people.  Three million people a year come to Spirit Mountain to hand their money away, making it the state's busiest tourist attraction. Since it has opened, the casino has earned almost a billion dollars.

Not far west of Grand Ronde the road enters the Van Duzer corridor, a segment of highway 18 remarkable for its beauty and forested pathway.  H.B. VanDuzer was chairman of the Oregon State Highway Commission from 1927 to 1931 and he was responsible for the path and construction of highway 18.  Originally a toll road, it eventually paid off its cost and now over 20,000 people travel annually to the area for day use and visitation.  The area is a strip of land along the highway over 1500 acres in size, and includes a small park.  Here the highway crosses the Coastal Mountains, at a dizzying height of 793 feet.  This shallow summit probably explains why a wagon trail lay across the path now used by Highway 18. 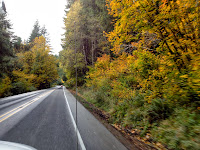 Van Duzer Corridor is a quiet, lush area of great beauty and its always relaxing to pass through it.  I've seen deer often along the side peering out (and rarely crossing), and it smells wonderful outside.  The Salmon River runs along the highway west down the oceanward slope of the mountains, giving the highway its alternate name. 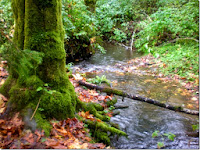 Then you come to Otis, Oregon.  Actually, Otis proper lies a few miles north of the junction between the North Old Scenic Road and Highway 18, but the town is noteworthy for the fact that it is for sale.  It has been for sale since 1999, and you can buy the unincorporated township of about 3500 people for $2,200,000 - down from the original $3 million asking price.  For that price you get a gas station and mini mart, a Pronto Pup corn dog stand, two houses, an empty 25-stall horse barn, a helicopter storage shed, a garage, a Grange hall, the Otis post office, the Otis Café, an auto-repair garage and 190 acres of farmland.  Presumably the homes of the people living there are not in the sale price.  As the town lies on the main road from Salem to Lincoln City and is one of the few places to eat past the Van Duzer corridor before you get to Lincoln City, it seems like it could be worth looking into as an investment, with a bit of construction. Yelp users give the Otis Cafe 4 stars, although I've never eaten there.
Then Highway 18 merges with the Coastal Highway, 101.  Highway 101 is one of the most astonishingly beautiful and curvy roads in the world, the kind of road that the guys on Top Gear UK don't think exists in America.  Its a short trip from there to Lincoln City, which is not a city at all, but perhaps they have big plans.  A narrow strip of land between the Coastal Mountains and the ocean is clustered here with shops and homes, mostly aimed at the tourist industry.
Lincoln City is not a place I'd really care to live,  it seems to have no real appeal other than a place to come and spend a little while and a little money.  Even the main attractions like Mo's Seafood restaurant aren't what they used to be (still good, but not as good as when it was in the little shop in town).  The scenery is wonderful, and the beaches quite nice, but the town lacks any real pull like Newport's aquarium further south.  The only real reason I love to visit Lincoln City is Robert's Books. 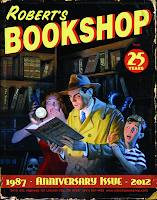 Robert's is the best bookstore in Oregon, perhaps the northwest, if not the west coast of the USA.  Not only does Roberts have a massive array of books, but the place has a fascinating character and feel.  Its welcoming and rambling, with that almost random layout that small used bookstores always seem to have.
Another major appeal of Robert's is his art collection.  Over the decades, Robert has found and bought original artwork from book covers and has them displayed with a copy of the book cover all around the store.  Its like a fascinating pulp and mystery art gallery.  He has original Pogo artwork from a Sunday strip, maps, old posters, and plenty of amazing bits to enjoy walking around.  Its worth a visit, if you do nothing else in the town.

Finally we get to the Siletz bay and Salishan Spit.  The Siletz on the east side of Highway 101 is another wildlife refuge, and its marshy hillocks of grass flock with herons, gulls, brown pelicans, egrets, and even bald eagles.  Deer wander in the marsh and smaller critters move unseen through the grasses.  The 100 acre area is closed off from human travel, and can only be viewed from nearby roads.  On the other side to the west is the Siletz Bay, enclosed mostly by the spit.
This bay is usually dotted with fishermen and crabbers.  The bay is mostly mud flats at low tide, and rises to a blue sheen of beauty in high tide, edged by tall grass.  As we passed it this time, I spotted two bright white egrets walking stilt-like through the shallows.
Salishan Spit is a very narrow strip of sand and rock that divides the Pacific Ocean from Siletz Bay and it is clustered with vacation and beach houses of high value and often odd architecture.  A gated community, it is run by strict rules.  no home can be more than two floors, and the use of the area is very strictly regulated.  No one has any lawns, and landscaping is very limited.  The beach grasses may not be replaced or diminished, and the homes cannot be painted wild colors.  Almost all of them are that grayish color wood gets in salty sea air, which makes them blend in well with the surroundings.

Originally the area was being examined for an airport for Lincoln City.  It is a very large area of relatively flat land that would be easily accessible to air traffic.  However after a fight of several years, the wildlife refuge and spit were assigned instead.  The spit is next to Salishan Lodge which is a high-end resort type of structure with a large, sprawling 18 hole golf course which costs $89 to try all 18.  The bay its self has a walk around it which is well worth the time to travel.
All of Oregon's beaches are public, which means you can walk from Washington to California on the beach (although some of it will require a bit of rock climbing to accomplish).  Oregon has more free public beaches than the entire East Coast of the United States.  The house I'm in has undergone a bit of renovation lately, as it was built in the early 70s and was getting a bit worn down.  Its 2 stories, with the top floor just a bedroom and small bathroom.  The only drawbacks here are the long stairs to get to the house proper (a bit of a workout lugging all the stuff up and down each time) and the bed I sleep in is made for a midget.  I can stretch out and my feet hang off the end when my head bumps the headboard.
Otherwise, its a nice, quiet place in a very pretty setting to get some writing and relaxing done.  I typically read a good half dozen books or more when I'm here, which is always time well spent, I figure.  I can't afford to buy anything at Robert's these days, which is a shame, but perhaps in the future I'll have more cash coming in.  Over the week I'll be putting some pictures up from my aunts.  They take an armload every time they are here and have gotten some pretty amazing shots over the years.
Cheers from Salishan.  I'd say I wish you were here but honestly I need the quiet.
Posted by Christopher R Taylor at 10:00 AM

Nice, I love our coast and I love that our beaches are publicly owned. I have never stayed at Salishan though. I may have to check it out.