This is an older piece that I think deserves more attention, so I'm reposting it.  Why all the girly men?  Maybe its chemical.

"Yes, but where will I get my nails done?"
-A Metrosexual male considering camping 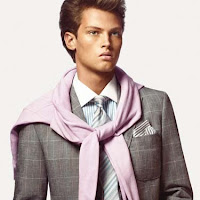 The Daily Mail has an interesting pictoral, showing the movie stars women thought were the most handsome, desirable, and sexy over the years. They don't go back as far as they might, to Humphrey Bogart and Robert Mitchum, but they mention Kurt Douglas and Steve McQueen. These were men's men, the kind of guys who would make a modern metrosexual hold their jacket while they danced with his date. They weren't conflicted and filled with angst, they were not beautifully coiffed and carefully manicured. None of them got their ears pinned back so they would look better on camera.

Today most supposedly hot guys look either like teenage boys (or are teenage boys) or give off a strong gay vibe. Models for men's products look like they would rather kiss the guys than use the products. Actors have prettier hair and more makeup than the actresses. What on earth happened?

The David Derbyshire writes in the Daily Mail about a recent study which thinks it has the answer:


Dr Alexandra Alvergne, of the University of Sheffield, says the Pill could also be altering the way women pick their mates and could have long-term implications for society.

'There are many obvious benefits of the Pill for women, but there is also the possibility that the Pill has psychological side-effects that we are only just discovering,' she said. 'We need further studies to find out what these are.'

The links between the Pill and sexual preferences are highlighted in a paper in the journal Trends in Ecology and Evolution.

Scientists have long known that a woman's taste in men changes over her menstrual cycle.

During the few days each month when women are fertile - around the time of ovulation - they tend to prefer masculine features and men who are more assertive.

On these fertile days, women are also more attracted to men who are 'genetically dissimilar', Dr Alvergne said. Picking a partner whose genetic make-up is unlike their own increases the chances of having a healthy child.

On days when women are not fertile, their tastes swing towards more feminine, boyish faces and more caring personalities, researchers have shown.

However, if women are taking the Pill they no longer have fertile days.

Now, how true this is, I wouldn't know. There might be something to it, and it might just be some goofy study done by a few guys in a basement at a university. I'm not sure how many women are actually on the pill or have taken medicine to cease their reproductive cycle. The internet has a few sites that claim 100 million women world wide are on the pill - but that's only a tiny percentage of the 2+ billion adult women in the world.

Its possible that this 100 million figure is primarily represented in the entertainment, style, and advertising communities, which would mean the people who decide what we see and are told to like are the most influenced by this "pill effect." I guess I could believe that, perhaps.

And, as commenters pointed out, guys like Fabian, Elvis, and Ricky Nelson were all considered hot in the 1950's... but they were lusted after by teenagers for whom the little boy look is more reasonable and appropriate. This study is about adult women, not kids.

But I think there's another factor that isn't being considered here.

One of the major driving forces in modern culture is emasculating feminism. Men, we're told, are just too masculine, and they must focus more on their inner child and their feminine side. All that testosterone is why we have wars and violence and crime. If only men would stop being so manly we could stop hunting Bambi and everything would be rainbows and skittles.

So we get a culture which pushes men to be weaker and women to be stronger. Tough guys in movies are often either a parody or shown to be deep down weak and sad inside. Women in movies are usually stronger, better, tougher, and more emotionally capable then the men are. Everything distinctly masculine (military, hunting, sports, etc) is downplayed if not openly mocked. Masculine concepts such as honor and duty are derided as foolish and outdated. The people who most cling to this ideology are heavily represented in media, entertainment, fashion, and culture.

Add to that the bizarrely overpowering, disproportionate representation of gays in media and entertainment - a tiny portion of the population which is given a gigantic voice - and the depiction of men becomes even more feminized.

So we get deliberate images of weak, feminized men in popular culture and entertainment.

There's also a pendulum effect which cultures tend to follow. Go back a few hundred years and men wore long powdered wigs, lace cuffs, and makeup that would make Tammy Fae Baker amazed. Then men became more rough and masculine, then in the 20s men were dapper, slicked back little things with manicures and a fear of physical exertion. Then the world went to war twice and realized those feeble things were worthless where it mattered. Then we got Alan Alda in the 1970s, alleged sex symbol and image of all that a modern sensitive 70's man should be.

Women and the culture reacted with revulsion at this weeping, feeble and hapless loser. It reacted so strongly we got Arnold Schwarzenegger, Sylvester Stallone, and Jean Claude Van Damme. But by the time Van Damme was fairly popular, he was a pretty boy who had perfect hair. Even those muscles fell out of favor, and we got Johnny Depp.

In time the pendulum will swing again, moving away from the wimpy pretty boy to more rugged, masculine men. But the trend is definitely away from that and to the girly boy, with only a rebellious culture flinging contempt at the mavens of fashion which brings this about. We're long over due for one of those reactions. A lot of women are seriously asking where have all the cowboys gone.

Since this was written, movies like The Expendables have come out, and big bushy beards are popular with guys, so the pendulum seems to be swinging away from the polished pretty boys toward more masculine images, for now.

Posted by Christopher R Taylor at 9:00 AM

I think the popularity of Duck Dynasty is another example of your last point.