I apologize for the lack of content, especially over the weekend, but what energy I have I've been pouring into getting Snowberry's Veil re-publication done.  I have finished off a bunch of internal illustrations, just one or two pieces to go.  I have the cover finished: 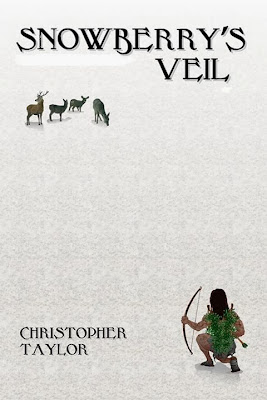 And I have the map done, a huge thing that's shrunk down considerably for the book (to reduce line size).  Today I did the basic layouts and formatting for the book, and when I finish the little illustrations, I'll get them in place.  Once that's done I hope to have the book out in Amazon and available on Lulu in November.
The Logo was odd.  I like the font, but it spaced some of the letters very strangely and I had to hand-adjust them together better.  Originally I planned to put a few pine boughs poking in from the sides, but I couldn't get them to look right so I dropped it for a very simple, very plain cover.
If I can continue to write books in this series (7 books total, each a different main character until the end when they all come together) I plan on giving each one a basic color.  Old Habits, for instance, had a mostly black cover with black velvet and a pile of gems.
The strange thing is, this is my first book, but its going to seem to be the second.  Anyway, that's what I've been busy with, and you can look for Snowberry's Veil to hit the shelves next month.
Posted by Christopher R Taylor at 9:30 PM

Looking forward to it. Somehow the paper schtuff just seems to be more enjoyable