LADIES AND GENTLEMEN, THE DUELLING OBAMAS

"...we should be sure we are talking with each other in a way that heals, not a way that wounds.”
-President Obama 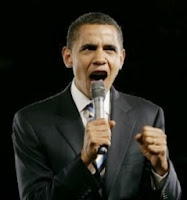 I was thinking about doing this and Rush Limbaugh saved me the trouble. He had his staff cut together statements from President Obama in his "civility" speech after Congresswoman Giffords among others were shot in Arizona, and statements from his speech last night about how he'll negotiate with the GOP just as soon as they cave and give him everything he wants.
Without further ado, here are the dueling Obamas:

The same people who were so very upset about the use of a target on a map and yelled for civility are using terms like "terrorist," "bomb thrower," "arson" and so on.  But hey, they mean well, right?


Why is this happening?  Because the Democrats see this as a chance to obliterate the Tea Party influence in the Republican Party, and because President Obama has unlocked the only way his far left politics can stay in office: constantly campaign to the hard left base.  You have to keep it up every day, because otherwise they get distracted, disinterested, and don't turn up to vote.  With that and the press on your side, you can get away with pretty much anything and the hard left will always be in your pocket.

Its working, although I'm not sure where that leaves the nation.  I mean, he's backing the Republican Party into a corner.  They can't give in now, or they lose all the remaining support they have.  Nobody really likes the Republican Party but people put up with them because of the alternative they see in the Democrats being worse.

If the Democrats had been all friendly and willing to talk, without all this rhetoric, the GOP would have stood fast a few days then stampeded each other diving for the first bone thrown them by the Democrats to show how bipartisan and willing to deal they were.  But now?  Its just forcing them to fight harder.

And really nobody likes it, at least people who're paying any attention.

Oh, and all that nonsense closing parks and so on, especially ones never closed before in the previous 16 closures?  Well the standout memory and tipping point in the '95 closure was interviews with some poor guy working in Yellowstone telling everyone he wasn't sure where his food was going to come from because his shop was shut down.  Not the whole park like this time, just his business in it.

And that's what the Democrats remember: lots of cameras on this guy making everyone feel bad for him during the shutdown.  Except this time with the number of workers in the US falling behind Carter years, it doesn't have as much impact with Joe Voter to see some guy without work. Yeah, me too, but I don't get paid when the shutdown ends.

So its not working as well, and its being handled very clumsily (shutting down wide open 24 hour memorials, then letting a huge amnesty rally take place in the same area?).  Eventually the Republicans will cave, and the most we'll see is a year-long delay before Obamacare is activated.  Which just puts off the inevitable, really.
Posted by Christopher R Taylor at 4:53 PM