IN WHICH I AGREE WITH Mr OBAMA

I was against it before I was for it!


In 2006 there was a budget battle.  Congress was spending money like crazy on top of a very expensive war on terror and rebuilding effort in both Iraq and Afghanistan.  Republicans wanted to raise the debt ceiling to pay for all this and more besides.  Democrats opposed doing so, because they wanted to go on record as opposing the war.  I say that because there's nothing about fiscal restraint that the Democrats have ever been characterized by in the last 50 years or so.
To get the budget to pass, the GOP resorted to the same sleazy procedural tactics that the Democrats would later use to pass Obamacare and other items; "deem and pass" or, as some wags call it, "demon pass."
Basically, here's how it works, the official name is the Self-executing Rule:


If the full House votes to approve a legislative rule that contains such a provision, the House then deems a second bill as also approved without requiring a separate vote, as long as that second bill is specified in the rule. That is, if the vote on the rule passes, then the second bill is passed as part of the rule vote.

That way you don't have to actually vote on both bills such as a different one from the Senate, you just presume they both passed because one was mentioned in the other.  Its a trash way of avoiding a full vote on another bill and is highly questionable from a legal and constitutional standpoint.
While this battle was going on, Democrats were making some noise about fiscal responsibility and debt and how bad it would be if the debt were allowed to get as high as 7 trillion dollars.  Unthinkable!  then-Senator Obama, for example, made this statement: 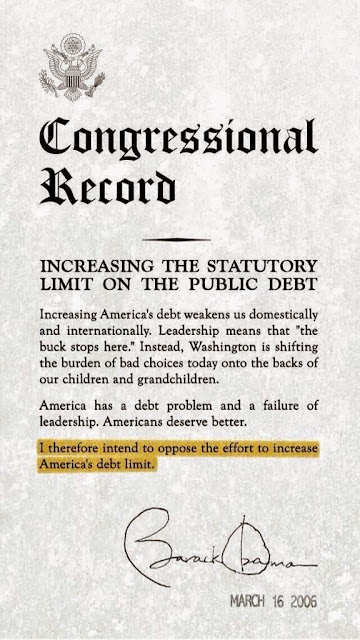 Now, given his actions as president and rhetoric regarding spending, I'm highly skeptical of the honesty of that statement.  The debt is now over seventeen trillion dollars and growing, and the president along with his Democrat allies have declared anyone who disagrees with raising the debt ceiling an "arsonist" and a "terrorist with a bomb strapped to their chest."
Back then, he was right: its irresponsible, weakens the nation, and shifts the burden of bad choices onto the backs of our children and grand children.  It is a failure of leadership, and Americans do deserve better.  This is even more true today.
Now, I believe its too late.  We had our shot and blew it, and now it doesn't matter a bit how things go or what happens.  I think that we're better off going over the falls quick and get it over with, the sooner to get to rebuilding.  But the blatant inconsistency here on both the part of the GOP and the President and Democrats is painful to see.  There's only two things that have changed: the party in power and the size of the debt.
Personally, I think the Republicans should just rubber stamp everything the Democrats want, or sit out on the vote.  You want this?  OK, knock yourself out, we won't filibuster or try to stop you.  Go to it.  Get it over with, there's no fixing this anyway.
Incidentally, look at that signature.  I think Obama is the first president to print his signature.  I can't remember another doing so.
Posted by Christopher R Taylor at 11:55 AM