"Right now on my Facebook page, I have linked to a New York Times article on how women's rights are being violated by South Dakota's new abortion laws. Janet has just posted on hers -- I'm not kidding -- video footage of her and her husband at target practice." 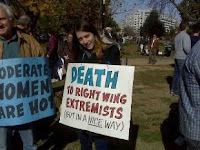 A while back I wrote a couple pieces on reporters encountering religion and responding to them.  One of the things you notice in a hurry if you're a Christian especially, or religious in any way, is how completely unaware of faith and belief that reporters are.  They just have almost not familiarity or sense for the topic and write the strangest stuff.
Almost every time a story is written, they get it wrong somewhere, usually a misquote or mistaken quote.  When the topic comes to religion or science, it gets even worse out of sheer ignorance and laziness.  And when it comes to religion, there's another layer on top of that: spite and revulsion.
The first story is from 2011 and its about a piece written by Taffy Brodesser-Akner in Slate.  She is writing about a friend who she was horrified to find out is not only a Republican but one of those horrible Tea Party types:

To her credit she admits something that many on the left do not seem to consider:

And yet, I think having a Republican friend is making me a better liberal. We need friends who differ from us. It's easy to watch Republican extremism and think, "Wow, they're crazy." But when someone is sitting face to face with us, when someone we admire and respect is telling us they believe differently, it is at this fine point that we find nuance, and we begin to understand exactly how we got to this point in history. We lose something critical when we surround ourselves with people who agree with us all the time. We lose out on the wisdom of seeing the other side.

Not the wisdom of the other side, mind you, the wisdom of being exposed to it and reinforcing your own beliefs. For example, when confronted with different ideas, is her response to consider, reflect, analyze, and challenge herself?

She told me she didn't believe government had any business funding it in the first place. That this isn't about abortion or hating women but ways the government doesn't need to be involved. She told me Planned Parenthood was well-funded and won't even miss the money. "Planned Parenthood will be better off without government funding and all the strings that are presumably attached," she said. "I sometimes wonder why liberals, who are so enamored of the freedom to do any damn thing they want, even take government money when it constricts their freedoms."

I closed my eyes and breathed through what she was saying.

She met the enemy and refused to even spend time considering what they have to say.  You can almost see her cringe and reach for a security blanket any time she sees a tea bag.
The other story is from 2010, about Gina Welch who wrote about a book she'd finished at the Huffington Post.  Basically she went undercover for years with those crazy Evangelicals after the 2004 election, trying to figure out how anyone could possibly vote for anyone other than Kerry.  Yes, some people really did think that.

Her biggest problem was that these people didn't fit what she just knew they were like based on her upbringing.

I knew a handful of evangelical Christians in Virginia, and they didn't align neatly with my conception of what evangelicals were like. So I was drawn to the navigation of those inconsistencies, and to challenge my own prejudices by experiencing firsthand the tactile reality of evangelical life.

At first, she was more open about what she was trying to do but she was met with suspicion and attempts to proselytize her.

She seems to understand why they were suspicious, amazingly enough, and further comes to the conclusion that they aren't so bizarre and horrible after all

The biggest surprise for me was the individual reflectiveness of church members. I think I'd had this stereotype of evangelicals as blisteringly arrogant dogmatists. But I observed instead humility and a kind of obsessive self-reflection, enacted through prayer. They call it listening to God's voice, but from it seemed to me like a constant internal pat-down of conscience, which really resulted in care with choices, and a movingly ample capacity for selflessness and generosity. I learned a lot by their example.

She believes she found significant ignorance about certain leftist hot button issues (feminism, homosexuality, etc), but blames her own culture for some of that. After all, if her side is so hostile and condescending, how can they expect anyone to learn more and want to know more about them?

Now, this woman seems to have a more open mind than the first, given that she was willing to go and find out instead of block her years and yell LALALALA instead of considering what she's told, but the contrast is pretty pathetic here.  Ms Brodesser-Akner has no intention or interest in even listening to someone who disagrees with her, and Ms Welch went to specifically do that.  In the process, she learned a lot.

Its too bad that doesn't happen more often, especially with religious issues and reporters.  They swim in a sea of ignorance and like-minded people when it comes to the topic but are terribly, terribly certain in their positions.
Posted by Christopher R Taylor at 11:41 AM