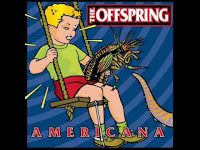 The Offspring is an American band that hit it big starting in the 90's with their debut album Smash.  Somewhat punkish and driven by hard guitar jams, they were bare bones rock and roll.  No-nonsense drumming and rhythm, without anything fancy, they sang about youth issues, rebellion, and crazy things like pyromania and street life.
But behind it all was a level of thoughtfulness in the lyrics that set it apart from, say, the Ramones or Green Day.  On their Americana album, The Offspring had several really thoughtful, quite deep songs about what life is like such as "The Kids Aren't Alright" and fun ones like "Pretty Fly for a White Guy" for a mix of entertaining music.
One of the best songs on the disc is "The End of the Line," about death.  Like "Still Remains" by Stone Temple Pilots ('If you should die before me, ask if you can bring a friend'), this song is about the death of a friend.  So far, I haven't had this happen, although I've had family members die and know the pain.  This song cries about the awful pain of missing that person and needing them to stay.
It seems a bit selfish to carry on like this once someone dies, but at that point, they're past caring.  And most of grief is not feeling bad for the person who is gone, but feeling that horrible torn hole in your soul where they once were.  Like a broken back, it takes time to heal and even longer to rehabilitate and live with that damage.  And when you lose someone close to you, what matters most is that now they're gone.
In time you get better, but in the end, you're never quite the same, there's a scar on your soul that lasts as long as you live on this earth and you'll never have them around again.  All those platitudes about how they live on in your heart and went to a better place, well they help a little but honestly all it comes down to is that you have to go on alone.
The Offspring continue to sell well and have a new album in the works, but the release date is unknown.  Americana was their most popular album but everything the band has released has gone gold at least.
When the siren's flash is gone
And we're left to carry on
All the memories are too few

Finally,
Your final resting day
Is without me
I weep
And think of brighter days
What about me?

You can't take back, the one mistake
That still lives on after life it takes
In that one day, that changed our lives
And bitter memories are left behind


*This is part of the Songs I Like series.
Posted by Christopher R Taylor at 10:04 AM