I've been hammering Twitter pretty hard lately, trying to generate interest in my writing and raise my profile as an author. I ran some conservative numbers recently in my head, and figured out that - for free - I can reach tens of thousands of readers using Twitter.
According to Twitter, the average user has 126 followers.  That means for each of my followers, I'm potentially reaching 126 people, which is a sort of super word-of-mouth operation.  All I have to do is get people to retweet, respond to me, or mention me in a tweet and it goes on their twitter feed.  How often that then gets re-retweeted is unknown, but at least once in a while it happens - reaching hundreds more.
So I am focusing on getting a few retweets every day to spread my name and "brand" out there through social media.  Its a clunky sort of experiment, but its worth a shot.  Since I started doing it, I've gained over 50 followers and have been retweeted by some pretty big names, meaning thousands of followers, not 126.
While I was doing this yesterday, a fun bit came up where a fellow asked for favorite Bugs Bunny quotes.  A black woman responded that she used to love "whatta maroon" until she found out what it meant.
For those of you whose eyes just crossed in confusion, let me explain.  Back in the days of the slave trade, English developed several terms to define various "blends" of African blood in a person, so to speak.  Some of these terms are still with us.
The term "mulatto" means half black, half white - President Obama, for example.  And it broke down from there, using various terms.  Octoroon is someone one-eighth African, Quadroon one quarter, and so on.  Other terms such as "Mustee," "Terceron," "Mustufino," and "Griffe," were used.  "Sambo" for example is one of these terms (75% African blood).  Over time almost all of these became very disreputable and fell out of use.  Now blacks use terms like "high yella" instead.
Well, Maroon is one of these racial terms.  It refers to either an escaped slave (especially from French island plantations) or the descendant of fugitive slaves in that area.  The thing is, its a pretty archaic term, one that fell out of use about 100 years ago or more, and simply has not been used in this sense for a long, long time.
So it makes no sense for Bugs Bunny to use Maroon in that sense; nobody would get the joke, and lets face it, Bugs was not exactly subtle.  Give that he called people "imbazzle" instead of imbecile strongly indicates that its just a twist on a word, not some double secret racial slur.
Yet this is the kind of racial demagoging being done and spread around.  Generally speaking the professor or other racial grievancemonger will pick this kind of thing to try to indicate racism that allegedly permeated US culture and the eeevils of the past when people like him weren't given enough power.
Something they will often do is point to cartoons with images like this: 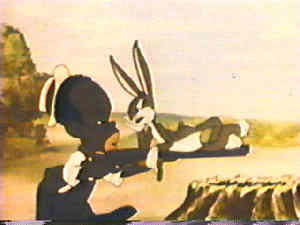 As proof of the horrible racism in the past.  They point to Bugs Bunny busting out singing "Mammy" in blackface is terribly hateful and racist, proof of the wicked bigotry of the white man.  OK I can see where you might be upset by some of these images.  The thing is, I'd like to ask a question:
Do you think white people are portrayed in a positive light in Bugs Bunny cartoons?
Because I don't see Yosemite Sam and Elmer Fudd as being especially noble and intelligent.  Think back on those cartoons.  Any time a human shows up, they're beaten, fooled, stupid, have anvils bounced off their heads, and so on.  White folks are the main representative of humanity, from gangsters to baseball players.
In fact, everyone but Bugs Bunny ends up looking like an ass in his cartoons.  Sometimes even Bugs looks like an idiot.  So when a black guy is portrayed as a fool and a caricature... welcome to the party, pal.  Its equal opportunity abuse from a cartoon rabbit.
Its not that they couldn't have been a bit more sensitive, about everyone (such as hunters, or Italians, what have you) its that the point of a cartoon is to amuse, caricature, and exaggerate.  Distortion and absurdity is the entire point of a Bugs Bunny cartoon.
Someone wisely pointed out that Warner Brothers cartoons are a festival of bad writing: the villains are stupid and no threat, the story follows no discernable path, the victory is cheap and usually absurd, and there's no story, just a series of vaguely related events.  No character development takes place, the dialog is silly and repetative, and so on.
But who cares?  Nobody turns on a Roadrunner cartoon to learn about philosophical distinctions regarding the nature of humanity.  Nobody watches Porky Pig stutter to experience catharsis through tragedy and redemption.  This isn't literature, its not even real storytelling, its absurd slapstick entertainment, its goofy and silly and fun, and that's all its supposed to be.
White people could scream racism at how idiotic and cartoonish Yosemite Sam is.  Why, its mocking gun rights to have Elmer Fudd keep blowing his face up with his rifle.  The offense is everywhere!  Except.. it isn't.  There's no offense because none of it is offered as anything but daffy fun to laugh at, without deeper meaning and significance.  There's no Tao of Goofy out there, because its just about being silly and enjoying yourself.
And people have got to understand that, despite Karl Marx' assertion, not everything is political.  Not everything has deeper meaning and cryptic messages.  Not everything is to be taken seriously.  Why not enjoy yourself a while.  Just so you don't live your whole life on that basis.
Posted by Christopher R Taylor at 9:49 AM

As I recall it was Al Jolson who popularized Mammy.... in blackface.

A big hit when it came out was Disney's "Song of the South" (Zippy-do-dah). When was the last time you ever heard of it? How many of the younger generation have no idea what I'm talking about?

Ric Ocasek and Paulina Porizkova did a curious version of that song for a cover album of Disney hits called "Mad about the Mouse" in the 90s.