MORE OF THE COST OF COLLEGE


In the past I've written a few times about colleges and universities, making the case that at the present time higher education costs too much and delivers too poor results to be worth attending.  This isn't a universal condemnation, rather a general observation.  There are still likely good enough, cheap enough schools out there, but not many.
Parents and students need to shake the idea of college being inevitable, the presumption that the next necessary step after graduation from high school is higher education.  It isn't, and for many, perhaps most people, it shouldn't be.  You can save a lot of money and get as good or better education through MOOC's on the internet, but that takes a great deal of discipline to complete.
Now, in the past I've noted part of why universities and colleges cost so much to attend; they have massive expenses.  From 1982 to today, college tuition and fees have increased 439% from while median family income rose 147%.  I wrote in Rethinking the University:

A US Department of Education study showed that from 1993-2007, the fastest rising cost for a college or university was administration: 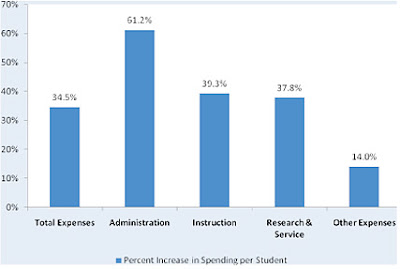 These administrators are expensive.  In 2000, New York University started paying no-interest, forgivable loans to administration and faculty to encourage them to come to the institution and stay there.  Only recently the program stopped after it got so much publicity NYU was shamed into cutting the cost.  A recent Wall Street Journal story (more on that in a minute) notes:

Former Ohio State President Gordon Gee... earned nearly $2 million in compensation last year while living in a 9,630 square-foot Tudor mansion on a 1.3-acre estate. The Columbus Camelot includes $673,000 in art decor and a $532 shower curtain in a guest bathroom. Ohio State also paid roughly $23,000 per month for Mr. Gee's soirees and half a million for him to travel the country on a private jet.

Colleges have also used the gusher of taxpayer dollars to hire more administrators to manage their bloated bureaucracies and proliferating multicultural programs. The University of California system employs 2,358 administrative staff in just its president's office.

People justifiably howl at the absurdly vast sums of money CEO's get to run mega corporations, even when they run them poorly.  Bonuses for industries begging for bailouts, huge golden parachute deals for CEO's of companies that are going bankrupt, and so on.  But its no different at major colleges and universities, they live in mansions and make huge money, too.  They just avoid all that indignation by being a protected class.
But for all that cost, a Goldwater institute study suggests that administrative costs only have pushed up college education by 20%.  In fact, 50-75% of the budget for your average institution of higher learning goes for expenses other than faculty and classrooms.  That means palatial estates, towering brick and marble edifices, incredibly groomed lawns, and so on.
Princeton University recently built a $136 million student residence complete with leaded glass windows and an oaken dining hall.  It cost about $300,000 per bed in the dorm. When your college looks like the palace at Versailles, that's very pleasant to attend and is quite prestigious, but is it really necessary for an education, and is that expense truly justifiable?  I get that colleges are competing for students and their dollars, I understand that they want to present themselves as a fine, prestigious, and serious place for a fine education, but this has gone too far.
Drexel University in Pennsylvania went on a building spree and ran its self into debt almost $500 milion in a year.  The California university system is in debt by over $14 billion dollars.  In fact, debt levels more than doubled in 500 institutions rated by Moody's from 2000 to 2011.  How did we get to the point where colleges could even charge as much as they do and spend like they do?
Some colleges get their money from lucrative and successful sports programs, such as UCLA, Florida State University, and Oregon State University.  These programs make so much money for the school through tickets, merchandizing, and TV broadcast deals that they can buy all sorts of nice stuff, such as a new stadium for the team or new Nike uniforms. But there's another, more significant cause behind the scenes.
This is going to sound contradictory and confusing, but the more money poured into institutes of higher learning through government loans and grants, the more they raised their prices. Professor Richard Vedder of Ohio University's Center for College Affordability and Productivity explains in the Wall Street Journal:

College costs have continued to explode despite 50 years of ostensibly benevolent government interventions, according to Mr. Vedder, and the president's new plan could exacerbate the trend. By Mr. Vedder's lights, the cost conundrum started with the Higher Education Act of 1965, a Great Society program that created federal scholarships and low-interest loans aimed at making college more accessible.

In 1964, federal student aid was a mere $231 million. By 1981, the feds were spending $7 billion on loans alone, an amount that doubled during the 1980s and nearly tripled in each of the following two decades, and is about $105 billion today. Taxpayers now stand behind nearly $1 trillion in student loans.

This growth in subsidies, Mr. Vedder argues, has fueled rising prices: "It gives every incentive and every opportunity for colleges to raise their fees."
...
Today, only about 7% of recent college grads come from the bottom-income quartile compared with 12% in 1970 when federal aid was scarce. All the government subsidies intended to make college more accessible haven't done much for this population, says Mr. Vedder. They also haven't much improved student outcomes or graduation rates, which are around 55% at most universities (over six years).

And the government's solution?  More loans, more grants, and efforts to get more people into college.  President Obama, trying to deflect attention away from other news, ran about pushing a college reform program.  Some of the ideas (cutting law school down from 3 years to 2) are quite good.  Most of them are the kind that create more problems than they solve.  For instance, the plan includes a push to get more people into college, especially people who aren't really college material.  Colleges already facing a collapsing bubble now are facing the same treatment the housing market got from the CRA which pressured banks to take loans from people who cannot possibly pay them back.
Now, President Obama's tour was mostly a "get out the vote" effort for college age kids to vote Democrat when it wasn't Operation Deflect From the Scandals, but the push to get more and more people into college has been going on for decades now.  And there's just not any reason to do it.  The article goes on to quote Vedder:


"Thirty-percent of the adult population has college degrees," he notes. "The Department of Labor tells us that only 20% or so of jobs require college degrees. We have 115,520 janitors in the United States with bachelor's degrees or more. Why are we encouraging more kids to go to college?"

The truth is, few people need to go to college at all, and most of the people who do go, do not end up in a job remotely related to their degree.  And while I agree that a good college education makes for a better citizen and more learned human being capable of better leadership, not everyone ought to go.  If you cannot handle the level of discipline and study, if you cannot learn what you need to and get the grades, if you cannot graduation, you shouldn't even start going in the first place.
Oh, by the way, that quote at the top?  That's Dr Vedder again, about President Obama's scheme to make it easier to have your loans forgiven if you take a government job.  The stated theory behind this plan is to encourage the brightest and best to serve the public in government work.  But it also encourages people to abandon the private sector and work for government, which shifts the focus of the economy and jobs even more from private to public.
And since colleges and universities aren't in any way responsible for repayment of the loans people take to attend, they couldn't care less if someone gets their debt forgiven or can repay.  They aren't on the hook at all no matter how things turn out.  They got their money.  And that's the last piece of the puzzle: as Vedder states, they're living in a dream world where there's no accountability, no cost, and no economic standards.
Small wonder you can have an economic department at these places that pitches absurd leftist schemes, they're isolated from reality and buffered from the real impact of actual economic forces.  Of course their theories seem sound, sitting in an ivy-draped multi-billion dollar estate everyone works hard to protect from its own stupidity and mistakes.
That dream world cannot continue, if for no other reason than states and the federal government just don't have any more money to give.  And as time goes on, parents are increasingly realizing that its just not a very great investment.  The whole system has to change, and change it will.  The only question is whether it will be intentional and carefully managed, or catastrophic and forced on them by reality.
Shorter Version: colleges cost so much in part because government subsidies allow them to charge more.
Posted by Christopher R Taylor at 8:58 AM