Pieces of eight, the search for the money tree
Don't cash your freedoms in for gold
Pieces of eight can't buy you everything
Don't let it turn your heart to stone
-Styx, "Pieces of Eight 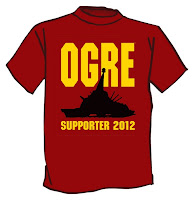 Kickstarter and other crowdfunding sites confuse me.  I get the basic concept: you put out a product and a request for monetary support, offer some goodies for people if they give enough, and let the money flow in to fund you.  Its a neat idea, and some great stuff has been funded by it.
What I don't get is how some projects get support.  I don't mean crazy stuff, that's just fun to support because its comical.  A few bucks to help some demented guy with his toothbrush for goldfish is worth a laugh.
No, what I mean are the projects that make no sense to support.  For example, people write books, and put the novels up on kickstarter to fund.  Except... there's really not much expense to writing a book, so what are they investing in?  It takes a bit of money to get the book edited, and some to get a cover done, but that's about $500 max, and you can get it done for more like $300.
I can see why to beg for money to write a book, we can all use some money.  I just can't work out why anyone would donate.  Its one thing to donate to a project that needs capital to get started, but some guy writing a book?  Donating 50 bucks to him is nice, but you're not likely to pay that much for a new book.
Another confusing type on these sites is when a big, established company uses crowdfunding to fund a new project.  Steve Jackson Games makes a lot of money every year from games ranging from GURPS to Munchkin.  In a bad economy for games, SJG is doing quite well.  They don't need crowdfunding to get a project going, they are established and wealthy enough to do it on their own, or get money from traditional investors.
Why would anyone, anywhere, fund SJG to make a new version of Ogre?  And who at this company had the stones to figure this was an ethical choice?  Yeah, you can get a tee shirt or a pdf of the rules, a lapel pin, a copy of the game or whatever.  But they went for $20,000 and got almost $100,000 in donations.
How on earth does this even make sense?  And isn't a big established company like that kind of stealing from the little guys by taking investment dollars they don't really need?
What I mean is this: there are only so many people who'll use crowdfunding sites to invest in any projects at all.  And each of these people has a limited amount of cash to spend.  If they spend money on SJG, then they have less of that cash to spend on, say, Bob's Pool Filters and his new idea.  Since SJG doesn't need to go through crowdfunding because banks will knock on their door to offer loans, that means they're taking money away from businesses that actually do need the help.
That just strikes me as unjust, somehow.
I considered doing a kickstarter for a new book, to generate money.  My theory was I could use the cash for publicity and getting a cover done.  Being able to buy copies of my book to send out to reviewers, a bit of money to get a cover done, and perhaps even an audio version of the book was pretty attractive.
I ended up not doing it for three reasons.  First, I really felt bad about begging for money in any context, ever. I just don't like doing it, ever, no matter what.  And I especially had a hard time figuring out why anyone would just give me money to write a book to begin with.
Second, I would have had to do a video and I have no clue what even to say, don't like attention on myself, and don't have the equipment to do it in the first place.  Everyone, literally everyone says you have to have a video or you just don't do well.  No thank you.
And third, I didn't want the hassle of having to make up and mail out all that crap I'd have to offer to people like bookmarks and drawings and so on.  It wore me out just thinking about it, but if you don't offer goodies, nobody will donate.
But mostly I couldn't figure out why on earth anyone would donate money to an author to begin with.  To me that's like paying a chef to come up with a recipe, then buying the recipe.  I'm paying for the food when I buy it, why in God's name would I pay more?  So I get a tee shirt that says "I paid the chef?"
My problem with marketing and business is that I just don't have a business mindset.  I simply don't get most of what works in business.  I cannot understand why on earth anyone would respond to advertising in any form.  Take a look at this ad:


Its funny right?  Memorable.  I like how its done.  But does it make you want to buy the product?  What are they selling, exactly?  Do you even remember the company name?  Does that ad work?  Because it doesn't make me care a bit about the product.  But what's the second comment on the youtube site?
Lmao This commercial made my mom switch her insurance company to "state farm"﻿
Now, anyone can say anything on the internet, but businesses spend millions of dollars on these ads, from conception to broadcast.  They work, apparently.  And I just do not get that, I have no intuitive connection to that process.  Advertising does not work on me.  I feel at best manipulated by ads, and treat them as an annoyance I brush away whenever possible.
So I just have no sense of what will work or not, of how to use tools like Kickstarter in any way.  I'm an idea guy, a creator, the guy who comes up with the plot, not the guy who sells it.  And while I could learn to be better with the business side, I'll never have that innate, intuitive sense of what works and what does not.  I can create without thinking about it much, its so much a part of me there's no delay between initial idea and fleshing it out into something useful.
I don't really know where I'm going with this.  Its just a stream of consciousness kind of post because I have absolutely no inspiration or interest in posting anything on my blog lately.  I don't know what it is, I've gone through this before.  In the past, I've jammed through it and forced myself to post anyway, and perhaps sometimes its showed.  But lately I don't feel any compulsion to post here, I've just used the blog for stuff that I get interested in and inspired to post.
For a while I was on a tear, with lots of stuff to put up.  I have a few more bullets in the magazine, so to speak, loaded up to write about, but I just can't find myself caring enough to write about them.  I want to get Snowberry's Veil rewritten and out on the market, and maybe I'm just so focused on that this other is just a distraction.
My mind kind of works that way.  Maybe everyone's does, I can't tell.  I have sort of gears I get shifted into, where I'm on fire for one concept or branch of effort and the others I have no interest in.  I get confused and have to force myself to think differently to even approach the other topic.  When I'm focused on art, then writing is like reading another language, it takes effort to even get started.  When I'm focused on writing non fiction like a work on the Lord's Prayer I have on the back burner, I have a hard time shifting over to fiction.  That's probably a pretty significant weakness on my part, showing limited flexibility, but it works for me in some ways.
So right now, my gear is just not set on blogging or current events.  And since I've basically written off national politics as a hopeless waste of time even events that used to set me off blazing away I shrug at now.  Yeah, events still annoy me, but its like getting angry at the weather.  I can yell all I want but its not going to change.  Why waste energy and time on it, especially when I have so little energy?
So here we are on kickstarter and trying to understand it.  I guess it works out well for people.  If I had any extra money lying around, I'd probably invest in some things. My friend Dean does, he gets little goodies regularly for helping out companies.  It looks fun.  I just don't want any part of the other side.
Posted by Christopher R Taylor at 11:59 AM

My son's an artist (though not professionally), and he goes through phases regularly. He'll draw daily for weeks ... then suddenly stop. Then he'll find another medium (beading and making bracelets/necklaces to name a couple) and then peter out and go back to drawing. He says he has no control of or intention associated with the activities. he just follows when he feels the muse influencing him.