"I don't know anything about economics, but I know hate." 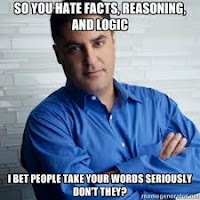 There was a time in Medieval Europe where people lived in fear of certain words and commentary.  If you were to express doubt or criticism of the Roman Catholic Church, its beliefs, or even its leadership, you were in danger of punishment, torture, imprisonment, or death.  To say that a priest was a child molester might get you thrown into jail or visited by the inquisition.  To question the Church's position on marriage could get you dead.
So if anyone did question the ruling dogma, they did it secretly, quietly, with whispers, or with select, trusted company.  Because it was heresy to question the church, and that was punishable. And there was always the fear that God knew when you were sinning by questioning the religion as well, so even being in secret wasn't enough.
Today, that is still true in some Muslim areas.  Simply questioning a ruling by a Mullah can get not just you but large portions of the community beaten, burned out, or killed.  Even just being accused of doing so suffices in some parts of the world.
And this was true about non-religious areas as well.  Treason has a pretty tight, limited meaning these days and carries virtually no punishment in the west.  Not so in the past.  Merely saying something that questioned or annoyed the king was considered treasonous.  Saying "man he sucks at chess" was enough for heads to roll, not just yours but your sons so they didn't seek revenge.
It didn't matter if what you said was true, reasonable, or even something people generally believed.  What mattered was that you were questioning the ruling dogma and the rulers themselves, and that was not to be allowed.  It was about dominance, power, and control.  If you never, ever allow anyone to even whisper doubt or dissent, you have greater power over the people.
Today in the west we're more evolved than that, with freedom of speech allowing people to speak openly and comfortably about whatever we wish, right?  Well obviously not; some topics are utterly off limits, no matter how free people claim.  From human rights commissions to college speech codes to plain old political correctness, people have to be almost as careful as in olden days.  Nobody is likely to hack your head off or send you to the rack for making a joke about President Obama, but you may pay a price.  You won't get imprisoned for refusing to make a wedding cake for homosexuals, but you might lose your business.
In this modern, allegedly enlightened age, the punishments have changed, but the attitude has not.  Some topics are declared off limits and you face penalty and punishment for them.  Questioning certain authorities, speaking on some topics, making certain jokes is just as forbidden and actionable as it was before the Constitution was written.  For all the rhetoric about freedom of speech in the west, its still not very free.
And what's even more disturbing is that certain topics are so forbidden, you can't even discuss facts and evidence about them.  Just mentioning the Bell Curve is enough to get angry attacks on you; whisper the fact that blacks get lower IQ tests than asians and whites, and you're likely to lose your job in some areas.  Consider Harvard President Summers who was drummed out of his job for suggesting (among other options) that maybe there are fewer girls in the sciences because, well, girls don't like sciences as much.
These unspeakable facts are called "Hatefacts" by some, and its a pretty good name for them.  Hatefacts are factual pieces of truth that are condemned as hateful no matter how accurate and truthful they are.  For example, the Centers for Disease Control (CDC) published a study on sexually transmitted diseases.  In it they noted that minorities are far more likely to get an STD than whites.  This is a hatefact; technically true, but perceived as critical of a protected group, thus racist and not to be spoken.
Or consider my noting that employers are less interested in paying and employing women as much as men because pregnancy can result in great productivity loss and expense for the business.  Hatefact; shut up, now I hate you for bringing it up.  I didn't argue that's fair or even proper, just that its true, and something that makes economic sense.  I lost several people who claimed to be my friend over it.
Some other hatefacts - things that are true but must never be spoken for fear of penalty:
And on it goes.  You can sense a pattern here: anything that makes a protected subgroup look bad is hateful and to be suppressed.  It doesn't matter how true these facts are, they are hateful and racist and sexist and homophobic and just shut up.
When you point out that these things are true, its not too hard to find something on the internet which seems to counter the truth.  Robert Wisenberg at Minding the Campus explains how it can be done:


Killing truth is also helped by the lack of clear social-science research standards. Rebuttals, no matter how flawed, are all too easy when the audience is already convinced. In the case of sex differences in mathematical ability, just use a measure that combines everybody from a little above average in mathematical ability to those four standard deviations above the mean into a single category. Guaranteed, this will show zero sex differences. Or just assess mathematical ability among pre-adolescents since large sex-related differences there have not yet emerged. Or use multiple statistical controls to "eliminate" any sex differences (outsiders seldom understand this smoke and mirrors tactic). Or insist that "artificial" gaps will vanish once society becomes totally gender neutral. Pretty soon the rock solid "hateful" research findings will be hopelessly out-numbered and who has the gumption to defend a single outlier finding?

You can out-shout your opponent and cry words like "hater" and "sexist" until they shut up, and claim victory.  Then when they try to debate you, scream about the lack of civility in the culture and how this is what got Congressman Gifford almost killed.
Another nifty trick is to accuse someone of something because you don't care for what they think or say, then if they deny it, call that proof of their evil.  Its called Kafkatrapping, and it works like this: "if you start anything with the words 'I'm not racist' well that's proof you are."  Don't like someone's position but cannot factually or rationally refute it?  Just Kafkatrap them.
The term Kafkatrapping comes from the book The Trial by Kafka in which the victim is accused of undefined crimes against humanity and destroyed by his denying them.  It works like this:

Person A: Its sad that men are raped so much more than women in America.
Person B: You're a sick sexist for even suggesting that.
Person A: but its true, see this report from the Obama administration?  I'm not sexist, I'm just telling you the facts.
Person B: Your refusal to admit your sexist nature is proof of it.

Just denying your guilt is called proof of it and all rational discussion breaks down because it has become pointless.  The argument is not based on facts, truth, reason, or intellectual inquiry, it is a schoolyard argument from the 5th grade which has nothing to do with truth.  Its about destroying your opponent, keeping your position intact, and making the other person look bad.
And its inevitable that when people reject reason and objective truth, they're reduced to childish arguments from emotion and strength.  Its all you have left, and all you can use.  The more this becomes predominant in a society, the more effective it becomes because people are less and less equipped to even begin to debate rationally.
And when you try, people yawn, grab their phone and start texting and type "TL;DR" - too long, didn't read.  If you can't reduce it to a 140 character soundbite, its not interesting.  Truth or reason is irrelevant, I'm bored.  Who cares if you're right, I didn't pay attention or understand you anyway.
And the heresy trials are entirely based on this kind of thing.  You start out presumed guilty, cannot argue facts or reality, are unable to engage with reason, and are destroyed for questioning the people in power.
Nothing has changed except the topics, not the tactics.  Heresy trials and inquisitions are still alive and well, they've just moved to another department.  And the reaction is for the same mix of reasons: an absolute zealous certainty of righteousness which cannot be questioned by sane or proper people, and a brutal need to maintain control and power, even at the cost of one's own integrity and stated beliefs.
Its just worth considering: if the facts and truth keep getting in the way of what you believe to be true, maybe its time to rethink our positions, not hate people for making us feel nervous or doubtful.
Posted by Christopher R Taylor at 10:02 AM

But at some point, those that insist on 'hating' the 'hatfacts' become clownish. Take the gays for example. 5 to 10 years ago everybody wanted to be friendly to their 'gay' friend. Then suddenly the gays overplay their hands (closing a store down because they wouldn't bake a gay wedding cake). At this point the regular Joes, who only pay attention when there's blood or injury says to himself, "you know, that gay shit is kind of pissing me off. I don't mind them do'n that gay thing but what kinda right do they have closing down an honest persons business?"
At this point the gays have a problem. It's my understanding they make up less than 5% of the population and as long as they keep to themselves, pretty much everybody will leave them alone. Now when they insist that special laws are created for them only that's where they will lose the average Joe.
Same thing with the black community and the race hustlers. Once they found out that there's gold in them there hills (i.e. shakedown a company for being racist by not having enough blacks in their workforce). Ask Coca Cola what that felt like when Jessie Jackson did it to them in the 80's. But you can only get away with this bull shit for only so long. And at this point the race card has been so over played that nobody really listens when some asshole yell RACIST. At this point almost every non-black has been called a racist so who really gives a shit anymore?
So ultimately my point is that these special interest groups that are protected now will eventually overplay their hand and become of little interest to the average Joe, and when that happens the politicians will have no use for them because they need victims that generate votes.