"Are we not all slaves, occasionally? To custom? To a situation? To an idea? Who among us it truly free..."
-Louis L'Amour, The Walking Drum 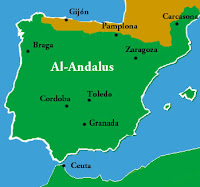 By the 11th century, Islamic expansion had spread so far that it encompassed most of the Mediterranean Sea, including almost all of Spain and parts of France.  Spain in particular was held until the 15th century, and was a place of great learning, advancement, and scientific exploration.  Called al`Andalus, this was the seat of the golden age of Islam, where the religion was powerful, rich and held much land.
By contrast, through most of this period, England was fighting off invaders and early on was divided into as many as six kingdoms.  Medieval Europe was mostly backward, miserable, poor, and huddled around castles of warlords protecting the impoverished peasants from raiders and other warlords.  Generally speaking, the Muslim-dominated parts of Europe were more advanced and more peaceful than those that were not.
Thus, we're told, that Islam is not a religion of backward thugs and head-hacking psychopaths.  Christians and Jews in Muslim controlled areas were treated well, we're told, and Jews were better off in Islamic territory than in Christian lands.  Many advancements are credited to al`Andalus in this time, such as mathematics, medicine, and other sciences.  Economics and agriculture were also more advanced than places like the Holy Roman Empire and England.
Was al`Andalus such a golden era, was it so much more advanced and superior?  In many ways, yes.  Struggling merely to survive, most of Medieval Europe was a pretty dark and awful place.  Even where there was learning and advancement, it was tightly controlled by an overpowered Roman Catholic Church which was suffering from corruption and backward policies.
Techniques in neurosurgery developed by Abu al-Qasim (Abulcasis) are still used today. Scientists such as Averroes started to accurately model the solar system (and the milky way galaxy), and Ibn al-Baitar published the Kitab al-Jami fi al-Adwiya al-Mufrada, which is considered one of the greatest botanical compilations in history, and was a botanical authority for centuries. It contains details on at least 1,400 different plants, foods, and drugs, 300 of which were his own original discoveries.
Cordoba was the center of learning and academic excellence in Europe. Its 70 libraries, one of them containing more than 600,000 books, compared to 400 in the largest library in Christiandom, in Paris. As many as 60,000 new works were published a year in Muslim Spain.  It is believed that nearly everyone in Cordoba could read and write, very unusual for the time.
However, there were some problems, and ultimately almost none of these advancements and learning can be credited to Islam, rather the lax enforcement of Muslim rule.  For example, to live in al`Andalus, Jews and Christians had to pay a tax for merely being of that faith.  They could hold no governing office, and could build no major centers of worship.  Almost every cathedral in Muslim controlled Europe was torn down, the few of which only survived because it was part of a treaty settlement; but eventually they were turned into Mosques anyway.
Non-Muslims lived in ghetto districts set apart from the rest of the city, which ultimately made Jews no better off than in most of Europe.  The one big advantage to being a Jew in Muslim Europe was that no ruler would suddenly decide you were to blame for problems and slaughter or drive you out without warning.  But all Jews and Christians had to wear a special patch on their sleeve - something probably quite familiar to Jews from the 20th century - and paid a high price for trying to blend in or hide their faith.
And, like today, the slightest infraction or perceived problem such as having a pig too close to a Muslim could drive the community into a frenzy.  Andrew Boston wrote:

Everything could be called into question, including their personal liberty… Furthermore, non-payment of the legal tribute was not the only reason for abrogating the status of the “People of the Book”; another was “public outrage against the Islamic faith”, for example, leaving exposed, for Moslems to see, a cross or wine or even pigs.

Technically, Muhammad taught that Christians and Jews should be treated with respect for being almost Muslim.  Since Islam was essentially cribbed from Jewish and Christian faiths and borrowed heavily from the Bible, spliced with Arabic culture, Muhammad viewed these peoples as being nearly brothers to Islam.  Yet in practice, the distinction and lesser status led to contempt and even hatred among the population and made these groups easy prey.
As for atheism, well you could be Muslim, Christian, or Jew... or dead.  There was no room for any other faith, no matter how you behaved.  There was no agnostic ghetto, wiccan arm patch, or atheist sector.  On the other hand, conversion to Islam wiped your criminal slate clean.  Nothing you did in the past mattered any longer; you were a new man and could start over.
As for the scientific advancements, they were very real.  However, the situation does not appear to be very positive for Islam as a faith.  Several of these innovators were of questionable or nominal Muslim allegiance, and their work was allowed by governors who were less interested in Islamic purity than they were the glory of having such advancements in their lands.  The men who came up with these advancements did so not due to Muslim rule and government, not due to permission or acceptance by Sharia law, but despite it.
When a particularly religious ruler took power in al`Andalus, such as al-Mansur Ibn Abi Aamir in the 11th century, they burned texts, banned scientific advancement, and killed scholars and scientists alike.  The fact remains that the religion of Islam is quite backward and opposed to scientific advancement as wasteful, blasphemous, idolatrous, and irreligious.  That was true back then as it is today, and if anything has gotten more so.  It was the lack of strict application of Islam that allowed such advancements and glory, not its imposition.
Peace and prosperity allowed study and advancement in al`Andalus, and the government there was willing to shrug at what these men did or ignore their questionable religious status as long as they stayed out of trouble and produced great works.  By contrast, Christian Europe was fighting merely to survive the next plague, war, or invasion most of its existence because it was so fractured and essentially driven by a pagan warrior culture. 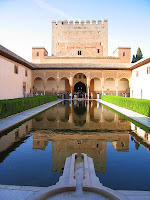 Art, didn't advance much in al`Andalus because the creative arts were viewed as idolatrous and blasphemous.  Geometric patterns were allowed, and some of them were breathtakingly beautiful and fascinating, but anything representing life was forbidden.  Thus, there could not be any Rembrandt or Michelangelo.  When great artists like Donatello, Van Eck, and Giotto were painting, Islam was killing people for portraying humans in art.  However, poetry was very developed and popular in Islamic culture and still is to this day.
So ultimately, it is true that in many ways, the Islamic rule of Spain in al`Andalus produced wonders in medicine, science, mathematics, and poetry.  Much of the architecture of the time was far advanced beyond the rest of Medieval Europe, and it was a better place to live, most of the time, for Jews than in the rest of Europe - and certainly for Muslims.
Yet at the same time, it was often a pretty bad place for non-Muslims to live, and there was no more liberty in al`Andalus than Saxony or Venice, it just varied what was free and what wasn't.  And despite more optimistic, rewritten history of the area from Muslims, it wasn't a golden age brought by Islamic rule in terms of science and advancement except for the basic benefit of stability and peace.
And while Muslims consider all land ever owned by a Muslim to be permanent Islamic territory, the truth is Spain is better off outside Islamic domination.
*This is part of the Common Knowledge series: things we know that ain't so.
Posted by Christopher R Taylor at 10:07 AM