I swear.  No, really I do use profanity, more than I wish.  It comes too easily and its not right.  A little profanity I think is not improper; everything in its place.  But profanity is so common and used so regularly in our society now its far beyond in its place and just wherever.

Some argue that this is just fine, that its just part of speech, but I would argue that profanity's purpose and value is in its potency.  If you shout the F-word constantly, it loses its purpose and value, and further coarsens an already troubled public discourse.  Part of the blame is the entertainment community, which decided that "gritty" and "real" meant "nearly continuous filth" so music and movies started pouring out profanity at a near-constant rate.

When David Mamet started writing screen plays, people were stunned at how much profanity he dumped into every scene.  These days its surprising when there isn't profanity in a film.  Movies like Kick-Ass start out with a mild profanity as the title and put horrendous language into the mouth of a little girl for shock effect.  Literally; she spewed that stuff in order to stun and shock her opponents, giving her an edge in combat.

The problem is that people have become so used to this constant stream of swearing that they've begun to think that's normal and proper, that its weird not to swear all the time.  People yell things in public that only a crude drunken person would rarely do in the past.

And its spread to business.  The first real example of this was the clothing company Fcuk in the 90s.  See how clever that is?  Its almost like saying... yeah, kind of obvious, really. MTV started using the band name "Butthole Surfers" regularly, almost with a sort of glee, joyous that they could get away with saying the word.

Advertising has embraced the concept too.  Altoids thought this was a great ad: 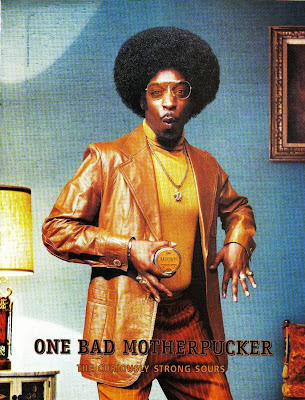 Get it, its like Shaft, but with pucker, because they're sour!  Edgy and clever!  And you can't see that P very well, it could be an F!  Hee hee hee!!!!  Then there is "Lipshit" lip balm, which James Lileks wrote about a while back:


My daughter found a gift for her friend, and we went up to the register. At the counter by the candy and the novelty bandages and other colored things that would catch a kid's magpie eye was a bin full of lip balm tubes. The logo, the packaging: top-shelf design.

It was called "Lip Sh**" -- without the asterisks, of course.

Daughter looks embarrassed. THAT WORD. IN THE PRESENCE OF A PARENT. You almost want to ask the clerk how she feels seeing kids walk up and see Lip Sh**, but hey, if the owner doesn't care, why should you?

Daughter's 12. She's heard the word. It's a rude crude world out there, and you can't shelter your kids from the raw American vernacular spirit, or from marketers who won't be happy until a billboard for McDonald's shouts (F-word) AWESOME BURGURZ. But is it too much to ask of our fine, upscale, quirky little boutiques that they not stick the S-word at child-level?
...
However elegant your handbags, however lovely your locally produced jewelry, however tasteful your selection of plaques with life-embracing quotes, you're just paving the way for the day you stand before a store window looking at Yukon Cornelius having an orgy with Rudolph in the manger, thinking, "My, how did we come to this point?"

Does anyone really want to put shit on their lips?  Who thought this up?  How old were they, 14?  Then there's Frank's Red Hot.  This hot sauce isn't bad tasting (I much prefer Cajun Sunshine, but its harder to find), but the ads are pointlessly profane.
So funny!  She says [CENSORED] and its an old lady?  Get it?  There's a whole series of these ads out now, with the old lady firing off the S-bomb in inappropriate places.  It gets bleeped every time, but you know what she's saying, and its just a matter of time before ads are spewing the same filth you hear everywhere.

Milder profanity is already out there.  Levi's proclaims that not all asses are created equal.  Diesel Shoes are about not running, but "kicking ass."  Mainstream TV will use words like "balls" and "bitch" after a certain time of night, and some shows running on cable use harder language still.
How did we get here, why is it happening?  Pepsi ran this ad, although not very many times:
And I think that illustrates it quite well.  The rise of profanity in popular entertainment and ads isn't because its so great a system of expression or such a natural method of speaking, but because that's how people perceive young people as communicating.  You'll not tend to see some gray haired old lady yelling S-bombs in public despite Frank's ads, that's why the ads are popular - they shock and surprise.  You go granny!

The entire culture of the west is youth-centered, to the point of absurdity.  Advertising is targeted at 16-25 year old like a laser, and they simply will not turn away from this at any cost.  Even ads directed at older people are designed to seem like they're for teens (Viagra, etc).   Boomers do not want to think about getting old, and want to think they're forever 19 at all costs.

The economics of this are frankly idiotic, as I've written about in the past, but basically that age group has the least ready cash to spend, despite having few responsibilities, because their earning power is quite low.  Yet in the 70s, it became conventional wisdom that this age group was where all the money was, and so it goes.

So young people swear a lot?  Well they'll dig these ads, they will be more real, more believable!  It will seem "with it" and "hip" to use frightfully dated terms.

At this point some of you probably think I'm just some puritanical old maid who needs to lighten up and get out a little.  Figure I'm too religious and uptight and should just chill the F out?  Consider this, then.  Profanity is cheap and mindless, its thoughtless stupidity.

My mom used to say that swearing is evidence of bankrupt vocabulary.  Like a person who is so in debt or out of money they are bankrupt of money, swearing is just throwing an f-bomb into a sentence because you're so ignorant or lazy you can't come up with a better adjective.

Its become self-fulfilling now that this is how people "really talked" so we get shows like Deadwood with cowboys spewing foul language like a fountain as if that was how they really were.  Back then they had a concept of when and where you would swear.  If the horse throws a shoe while chasing down a herd of steers, that's when you swear.  When you say  hello in the bar, you just don't.

Filling the air with profanity doesn't show you're more "real" or socially adapted, it shows you don't have much imagination, it demonstrates you have little else to say.  When motherf***er is every fourth word from your mouth, that means you are a pretty simple minded sort of fellow.

And frankly, an offensive one, to boot.
Posted by Christopher R Taylor at 10:47 AM

BRAVO!
I would love to show this to my brother-in-law, but he would tell me to f-off