"I'da made that flight to Paris but Lindy beat me to it."
-Duke Talbot, Air Mail

We pretty much take for granted that you can contact someone on the other side of the world in seconds these days, but there was a time not all that long ago when you had to wait days to reach someone just a state away.  Air mail didn't start until the 1920s, which is just under 100 years ago.  And when it started, not only were planes a reasonably new technology, but so was aerial navigation.
Flying was largely a matter of landmarks and following roads, since there was little in the way of charts and mapping was still not very extensive.  Especially in the Western USA where there were still cowboys riding horses around and no interstate freeway system.  And instrumentation was very simple if there was any at all.
Starting in 1920, the US government began delivering mail by air, which was faster than the train, although planes could carry significantly less than trains.  But there weren't adequate charts and much of the western terrain was without easy landmarks from the air.So the government came up with a cunning plan to help with mail delivery.  To aid with delivery of mail across the United States, they began to set up little way stations which could be easily seen from the air, including giant stone arrows pointing the way westward. 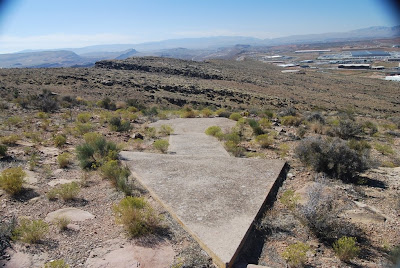 Each was topped with a station containing a 51-foot tower, and each arrow was painted bright yellow for easy spotting.  Scattered ten miles apart, these self-sustaining stations had a generator which would maintain the rotating light and give pilots a regular trail to follow from the air.  At the top of the tower tower was a 1 million candlepower-rotating beacon. Pilots could see the clear flash of light from a distance of 40 miles. Also at the top of the tower were two color-coded 100,000 candlepower course lights; one color pointing west down the arrow, the other pointing east.. 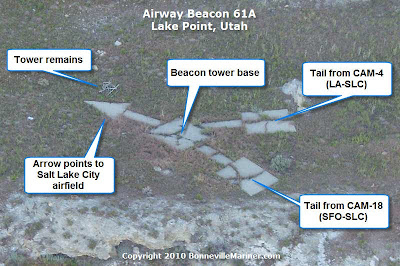 The entire system took five years from 1924 to 1929 to complete, and when it was done, even the dimmest pilot could make it from New York to San Francisco even in poor weather in about 30 hours.  Air Mail wasn't cheap; at 10 cents a half ounce you were paying to get your mail through quickly, but it was worth it for business (that translates to around $2.74 an ounce.  These days anything that travels more than a few miles out of town tends to go by air, and you pay only for air mail outside the US. 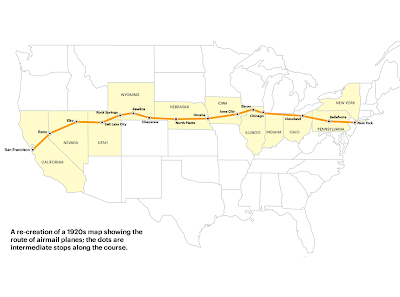 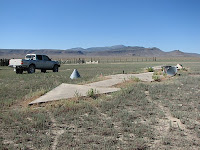 In WW2 the sheds and towers were torn down to make war materials, and by then the charts and instrumentation had gotten good enough that the arrows weren't needed so much any more.  There were many more routes to fly and the trail was forgotten.  These days the paint is flaked away and the structures are long gone, but the huge concrete arrows remain, cracked a little more each year from weathering.

They're off the beaten path for the most part, and as a result are little known, but you can see a few on Google Maps if you want, such as this one near St George, Utah.  As you can see, they were quite large.  Of course these days its all GPS and radar and the charts are amazing, but the arrows are still there and if I write a post-apocalyptic story, they'll play a part.
Posted by Christopher R Taylor at 8:36 AM

Wow, Christopher - two days in a row - Thanks for the refreshing break from politics.

These air mail markers were something I'd never heard of before and you inspired me to watch Grosse Pointe Blank for the first time.

I hope you enjoyed the film!