WHY COLLEGE AT ALL?

Wagstaff: Tomorrow we start tearing down the college.
Professor: But, Professor, where will the students sleep?
Wagstaff: Where they always sleep: in the classroom.
-Horsefeathers 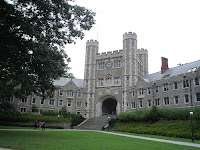 Recently, Instapundit Glenn Reynolds argued in a column in the USA Today that for some, perhaps many people, college isn't worth it.  In fact, he argues that for some, its actually a detriment:

In their recent book, Academically Adrift, Richard Arum and Josipa Roksa note that many students show little actual learning in college. Some students -- especially those from poor and minority households -- actually come out of college doing worse on assessment tests than when they went in.

I would argue that for almost no one is college actually worth it.  The average 4 year degree in the United States runs over $25,000 for a public university, and that is only for classes, not housing, books, food, travel, fees, and other expenses.  Just walking through the doors at Harvard University costs almost $20,000 a year.  By the time all is said and done, a student can lay down more than $100,000 for a bachelor's degree, and it goes up from there.
Plunging yourself into debt that much even before starting a career was always a questionable move, but in this job market its simply absurd.  It could take a significant portion of your life to pay off that kind of money, just when you're trying to get started.  And since getting a college degree means finding a job at Sears or Burger King these days, that's going to be a pretty significant burden.
Now, as I've written before, the absurd claim that every kid should go to college is a pretty new one, and its from the myth that education triumphs over everything.  There is a belief out there, especially among the poor, that if only you can get a good enough education, you can do anything and leave poverty behind.  That's just absurd, as hundreds of thousands of recent college graduates can tell you.
At this point in history, college is a waste for anyone not going into a profession which directly requires a specific kind of degree.  Doctors, Lawyers, Ministers, that kind of thing.  For anyone else, its just a massive waste of money.
Here's what I mean.  As I have argued several times in the past, college is not a fancy, expensive trade school.  You don't go to college to get a good job, unless you're an idiot or targeting a specialized job like the ones listed above.  A liberal arts education is meant to help finish crafting young minds, to equip them for facing the world by finalizing the education they receive and training them to think properly with the right tools to face any of life's challenges.
A proper, ideal college education turns a young person into a better citizen and leader who has not just the knowledge of past events and the world, but the understanding to turn that into action.  Whether you get a better job as a result is a side issue, not the purpose.
But these days, what kind of education do most colleges offer?  Are you truly being prepared in this manner, are you learning to be a better person, a better leader, an independent thinker ready to face challenges wisely and with understanding?  In too many cases, no (see the above quote).  In fact, in some ways, too many modern students leave college less ready to face life because they've had little more than a four year crash course in political correctness, global warming hysteria, contempt for tradition and religion, and leftist ideology.  Sure, they learned math and science on the way, but it was always couched in a certain sort of approach.
Colleges and Universities love the Howard Zinn approach to history, where you put some factual events in by year then find the worst aspects of America, even if you have to invent them.  This kind of education then splits everyone into interest groups and looks at what these events mean to these groups rather than just what they meant.  Here's an example from John Hindracker at Powerline:

Compare and contrast the impact of the American Revolution on different groups within the 13 colonies that made up the new United States. (Revolution and a New Nation: 1754-1800)

The entire point here is not so much to learn about events as it is to balkanize everything into little groups and focus on that rather than the actual event.  Gone is an attempt to understand events in terms of their meaning and significance worldwide or in history, gone is a focus on context and how events work together as a sequence, and in its place is identity politics.
Now, this isn't universal, and you can still, despite this nonsense get a decent education if you try and are smart enough.  The problem is it costs so much, takes so long, and gives so little.  And to compound matters, what was once only available at these prestigious institutions is now much more broadly available, and cheaper.
The truth is, many people just would not benefit from a degree.  That's no insult, why get a degree if you love to work on motorcycles or are a painter?  Why get a bachelor's if you're just going to take over dad's farm, or be a plumber or pave roads or write comic books?  Its not that a proper liberal arts education couldn't help you in these fields, its that it would be a vast expense for little return.
Even assuming you're the kind that would benefit from and prosper in college education, though, there's just not much point in the traditional college education these days.  For a fraction of the cost, you can sign up online and get exactly the same kind of education through Massive Open Online courses.  MOOC are starting to gain a lot of momentum and attention, and basically all they are is the same thing a regular college course offers - including lectures, reading material, etc, but they're done over the internet instead of in marble-columned ivy-draped palaces.  Danielle Allen writes in the Washington Post:

For the moment, providers of MOOCs make their courses available to anyone. There is no admissions process. As in a video game, anyone can start, but you have to master levels that can include very difficult work. For the 10 percent who get to the end, the learning is real.

The range of subjects that might become available to everyone through MOOCs is potentially as broad as the array of specialties represented throughout the professoriate at all institutions. Already some of the most successful MOOCs involve not science and technology but rather Greek mythology and modern poetry.

She goes on to point out that presently colleges are unable to actually offer every possible course - they can't afford the cost and it requires a specialized instructor which may not be available.  But MOOCs can; they can offer everything and anything.  Colleges cannot seat 15,000 students in a class or help them, but an MOOC can.  Admissions cull students down to the most likely to learn and to a manageable number for a college, but MOOCs are indifferent to ability and numbers; you go until you can't, and then you're done.
The question is only this: will colleges and universities accept MOOC classes as college credit, and will someone who finishes these courses be treated as if they have gotten a college education?   I mean, if you take the same classes in MOOCs that you would at Princeton University for your Master's, how can someone justify not treating you as if you have a master's degree?
But let's say you can't get that degree without college.  That doesn't necessarily mean you have to lay down all the cost for a traditional college.  Ms Allen goes on:

Colorado State’s Global Campus advertised last year that it would give credit to enrolled students who passed a MOOC in computer science. This would cost students $89 instead of the $1,050 for a comparable course. There were no takers. Seven additional institutions are set to make similar offerings in the coming year. According to the Chronicle of Higher Education, they expect only hundreds, not thousands, of takers.

Get enough credits at MOOCs and you can get a degree with less than a year of college.  And as for professorial interaction, there are plenty of cheap or even free options for students to interact with instructors without even being there.  Skype, email, online chat, even MMOGs like Second Life are being used with MOOCs to teach and help individual students.
And the educational possibilities don't end with MOOCs.  Look around you on the internet.  Remember when you could only learn about stuff at the library or with that encyclopedia set your parents got when you were born?  Now you have it all at the click of a mouse.  Most of what you paid tens of thousands of dollars to get an education about in the past you can get for free online today.  All it takes is time, discipline, and a desire to learn.
Personally I've learned far, far more after school than I ever did while attending.  Its not that my education was so very awful (although often it was), its that there's so much available to learn so easily in the world today. 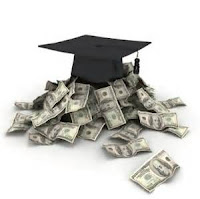 And imagine, if you will, what you could have done with all that money spent on college if you'd just gone into debt spending it in other ways?  For that Oxford education you could have bought a really nice house.  For that Ball State education you could have gone on five cruises around the world.  You could have bought a small franchise, launched that business you dreamed about, had a really nice car all that time.
See, my problem isn't with college education.  I believe higher education, properly done, is a wonder and benefit to nearly everyone.  I just believe that you'd be better off spending that money somewhere else than buying a new palatial building for the Sociology department, or 3 new administrators, or that tenured leftist professor's BMW.
The problem with colleges and universities today is the quality (and slant) of education and the excessive cost.  Its always been expensive, its just passed the point of being worth it these days.
Posted by Christopher R Taylor at 10:01 AM

"Just walking through the doors at Harvard University costs almost $20,000 a year. By the time all is said and done, a student can lay down more than $100,000 for a bachelor's degree, and it goes up from there."

Well yeah, including all costs, but from what I could find just flat tuition was around 20 grand a year. Could have been faulty data though.