THE STATE OF FILMMAKING TODAY

"Film is a 19th century invention. We are at the top of the photochemical process. This is about as far as it's ever going to go."


Film making is big business, so big its one of the main money making industries left in the United States.  The US doesn't make cars like it used to, it tends to import materials like lumber and steel, but it does produce an awful lot of entertainment for the whole world.
Yet as the market and technology changes, the film making industry is changing as well.  I watched a surprisingly terrific documentary by Keanu Reeves of all people about the way digital cameras are changing Hollywood.  I recommend the movie, its called Side By Side and it is on netflix for free.  Here's the trailer:


Side by Side examines changes in the technology and the way digital cameras are being used, and ultimately what it means for movies now and in the future.  George Lucas for all his limitations as a writer and director was an innovator in film making and loved cutting edge technology.  He used it to great effect in his films, and is a huge proponent of digital film making.
But what wasn't examined much in the documentary is what digital has done to the art of film.  CGI and digital processing can do incredibly wonderful things - there are films that literally were impossible to make before computer effects such as The Avengers and Jurassic Park.  Directors such as Christopher Nolan are trying very hard to make art using digital effects instead of just spectacle.
At the same time, there's something being lost, and its not beauty or clarity.  When films went from black and white to color, film makers lost the skill at using light to tell a story.  Old B&W films were stunning in their use of shadows and light, painting a picture using darkness and the contrast because they didn't have color to tell a story with.  When color came around, nobody had to do that any longer and the contrast didn't work any  more.  Those wonderful noire images of shadows and light vanished and the use of light as a tool was basically lost.
Its not that color cannot make astoundingly wonderful images and films, consider movies like Dreams by Akira Kurosawa.  Its that a powerful tool and a way of creating film was lost when the technology got better.  Some people to this day make black and white films once in a while to recapture those amazing images.  Nothing compares.
The same sort of thing is happening with digital film making.  Now, instead of working hard to get the right angle, lighting, and setting, a film maker can get it roughly correct then go into the lab and add or subtract elements, change the lighting, colors, and hue of the film, and completely remake a movie.  No more waiting for the sun to come out, no more worrying about power lines in the way or a teddy bear in the wrong spot.  Guys in cubicles with computers can fix it all for you.
I remember watching the extras on the Fellowship of the Rings special release edition, where the guys at Weta Workshop (one of the best effects teams on the planet) showed off a new program they had which could shift lighting and color on film.  They showed how they could brighten or shadow faces during a conversation, enhancing the attention viewers would pay to each character as they spoke.  While watching the film, I never noticed it, because its fairly subtle, but seeing it again, I could see how they upped the light level on Aragorn when he spoke, the shifted it to Legolas as he spoke.  It was like shining a light on each character in turn.
And while that's interesting and has great possibilities, it is also somewhat disturbing.  Its not that this is new, directors used to use focus to do this, making one character then another clear in focus or blurred slightly.
The problem is that tools like this make directors and cinematographers lazy, or even superfluous.  The director's job is to use the medium of film to tell the story of the script in the most effective manner.  He crafts the mood, paints the picture, motion, and energy of the movie with his understanding of what things will look like on the screen.  If tweaking the shot with a computer takes care of all that, the director isn't really even needed so much any more.
Pacing, focus, movement, almost everything can be manipulated in a lab, and its getting to the point now that post-production takes several times longer than actual filming.  Unless something really eggregious happens on the set (like a wall falls on the actor or they trip and fall over something) you can fix it post production.
What does that do to film making as an art?  Instead of being something requiring skill and craft as you work, you can throw together whatever is remotely close to what you want and tweak it all later.  And as CGI gets better, eventually who'll even need actors?  The movie and book Looker comes to mind.
If I had the connections and cash, I'd get Looker remade, its so appropriate for today's market and viewers, and it would be much better with higher technology and less of a blatantly 70s feel.  Which brings me to another point; remakes.

Look at what's being remade this year:
Robocop
Point Break
Pet Sematary
The Crow
Barbarella
An American Werewolf in London
Dirty Dancing
War Games
Time Bandits
American Psycho
Commando
Escape From New York
Highlander
Lethal Weapon
Short Circuit
Romancing the Stone
On and on this list goes.  What on earth would compel directors to remake films that don't need remaking?  Remember the rules for a remake go like this: you should only remake a movie if the original is
That's it.  None of the above movies suffers from any of these flaws.  Yes, films like War Games are dated, but that's because they are set in a specific time frame.  Period pieces aren't dated, they're supposed to be that time period.  You don't remake Braveheart because it feels dated, being set in a medieval period.  You remake Omega Man because its so 70s it makes your eyes hurt.  A lot of films made by former music video directors are going to need remaking in time because of this effect.
Why are these films being done?  Well my brother explained it well.  Today's film market is 90% foreign, not American.  US studios are still the world leaders in film making, but they don't focus so much on what interests American audiences as they do  what will make them money overall.
Films like Robocop did some foreign business, but most of the big 80s films were American products and were not broadly distributed.  That means foreign markets are largely unaware of these films, and they can be redone for big bucks.  Plus, remakes mean you control the film the way you like it as a studio rather than all those rights and ownership problems from films, especially little ones that did far better than you expected.
That's why someone is remaking Point Break, a movie that the world would be no poorer lacking entirely.  Because it did big business but China didn't ever see it.  Speaking of China...
Did you know that Hollywood made special deals with China so they could get films into that market?  Over a billion potential customers are in the country, and Hollywood wants some of those yuan.  So Hollywood worked out a deal with the Chinese government and various companies in the country to edit and release films to the Chinese people.  So far so good, its entertainment for them and money for film makers.
Except China apparently isn't paying Hollywood.  They have billions in film revenues which are owed the film makers in the US, but China just isn't paying, according to Clair Suddath in Business Week:

A state-owned distributor, China Film Group, is refusing to share any box-office payments, according to the Hollywood Reporter, over a disagreement involving a new 2 percent tax increase that China has leveled at U.S. film studios.

In a World Trade Organization agreement between China and the U.S. last year, China said it would pay foreign film studios 25 percent of their box-office revenue, up from the 13 percent to 17 percent range in the previous agreement. China Film Group initially said no additional fees or taxes would come out of that 25 percent, but for reasons that are unclear it changed its mind and introduced an additional levy on all box-office payments. Hollywood studios have so far refused to pay up because, they say, the new tax wasn’t part of the WTO agreement. As a result, China has been holding box-office payments hostage in what’s been a silent international standoff that has stretched on for months.

Basically, Hollywood and China made a deal, China decided they wanted more of the cut, Hollywood refuses to pay this, and China is saying "I have altered the deal, pray I do not alter it further" and is holding back what they owe film makers. 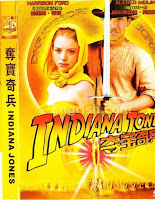 Its hard to find a side to back in this conflict.  On the one hand you have the corrupt brutal Communist Chinese government and deeply greedy, corrupt Chinese businesses.  On the other hand you have deeply greedy, idiotic activist lefty Hollywood film makers.  So almost three billion dollars in revenue for movie makers is unpaid in China.
Hollywood is sort of over a barrel here; they want that revenue and those eyeballs, they want a movie market equal to about a quarter of the planet's population.  If they want that, they have to play ball with a group of corrupt politicians and businessmen.  At the same time, China wants those movies and that tax revenue, so its not like Hollywood has no leverage.  Yes, China has long stolen and pirated films to show, but that is not the same as getting the real deal mainlined straight to the tax vein from the source.
So Hollywood can just say "well then you get nothing" and eat the losses, but then they lose potential revenue that would equal billions every year.
Expect Hollywood to blink first.  And expect China to then find another surcharge, fee, tax, or expense so they get even more of the cut.
Posted by Christopher R Taylor at 9:12 AM