"Ladies and gentlemen, the story you are about to hear is true.  Only the names have been changed to protect the innocent." 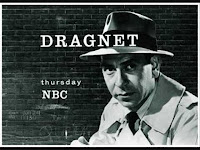 Posted by Christopher R Taylor at 8:31 AM