"12 million people are looking for work and 3 million jobs can’t be filled? How come nobody is asking questions about that?" 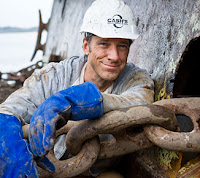 Mike Rowe is one of the hardest working men alive today.  He's held more jobs - hard jobs - than anyone alive, I suspect, and revels in them, no matter how hard or nasty they may be.  His perspective on work and life has been shaped by this experience, but he always had a very strong respect for the value and importance of work, which is why he started up the Dirty Jobs show to start with.
A column in the Muskegon Chronicle recently used Rowe's image without permission with a piece about bad jobs and the economy, and Rowe responded on facebook.  I'd like to post the entire bit here, because it seriously is worth looking over.  I'd only post a portion but as near as I can tell its only on Facebook, and while I recommend "friending" Mike Rowe on facebook, not everyone can, because of the limits on friends.  So here you go:

Over the years, the Dirty Jobs Code of Conduct has kept me from saying stupid things in the press. Today, it’s used primarily to assist writers like you with the approved use of my name and likeness. Obviously, you have never seen or heard of the Dirty Jobs Code of Conduct, since most of your article violates every clause and restriction therein. I must therefore take a moment to assure your readers that the appearance of my face in such close proximity to your headline is in no way a personal affirmation that certain types of jobs are in fact “bad.”
Here, then, are a few basic guidelines on the proper use of my name and likeness, pulled directly from the most current version of the DJCC. Since your Question of the Day is clearly not rhetorical, I’ll attempt to answer it here, with a level of detail that could only occur on a cross-country flight with no movie, no crossword, and a dead Kindle.
(I have no expectation that anyone with an actual job will have the time to read much further than this.)
Steve Kloosterman, MUSKEGON, MI – Most of us can tell a story about a job from hell somewhere in our past. There’s the first job, the one we took because our parents said, “You can’t hang around the house all summer long.” Maybe it was at a fast food place or in a retail outlet.
MR - First of all, Steve, the Dirty Jobs Code of Conduct contains a Damnation Clause that clearly and unequivocally states that my photo “can not be used in conjunction with any satanic reference, including but not limited to Lucifer, Hades, Old Scratch, Hell, Perdition, Beelzebub or Honey Boo Boo.”
Secondly, jobs don’t come from hell. They come from people with money who are willing to pay other people to work for them.
Thirdly, I have worked in both fast food and retail, and neither one reminded me of the Netherworld. (Although the Taco Bell drive-through at 2 a.m. does smell vaguely of brimstone and sulphur.)

Yes, that's a lot to read but its all well worth it.  Included is the part about how there's a lot of unfilled jobs out there - something I've written about in the past - and lots of people looking for work.  Yes, the economy blows, yes only 58.7 percent of working age Americans have a job.  But there are jobs available... and people aren't taking them.

That says something about the state of the country, something bad that has nothing to do with economics as such.  More than 100 million Americans are on some form of welfare, and American households are pulling in more from the US government than they pay in taxes.  That's a pretty profound image of American culture.
There are real problems with the federal and state governments in their economic policies.  But the US has more problems than just in government - in fact, the problems we see in government come from the basic cultural rot and fixation on comfort, ease, happiness, pleasure, and health.  In a nation where about a third of the population lives off the efforts of others, shame no longer is a factor when it comes to lack of work or charity. A job isn't something that stands in the way of you having fun or being what you were "meant to be," its how you get there.
Posted by Christopher R Taylor at 7:45 AM

That was an excellent smack down.