Nelson Mandela, the first black president of South Africa, the civil rights hero of the west, a man held highly as a hero and leader for Africa, cruelly mistreated by the fascist racists of Apartheid.  Mandela became a symbol of the oppression blacks faced in South Africa, and an icon of the left.  Held in prison for decades, his eventual release was one of the main events that signaled the end of apartheid in South Africa.
Nelson Mandela was jailed in 1962 and held for 27 years in various jails, mostly Robben Island prison.  During this time he became a celebrity of the left, suffering for his political ideals under a cruel, racist government.  He suffered in prison, catching tuberculosis while in the dank, poor conditions of Pollsmore Prison.
The slogan "Free Mandela" began to ring louder in the west, and pressure grew against the South African government.  Trade embargoes began to build up, and bans on South African products were passed in large economies such as the United States.  In 1989, DeKlerk took over as president of South Africa, and he believed that apartheid was unsustainable.  He freed Mandela and the rest of the jailed members of the African National Congress over time.
Now free, Mandela toured the world calling for apartheid to end and white rule to be stopped in South Africa.  He visited various nations to great acclaim and praise, and finally when the system fell apart, it was Nelson Mandela who negotiated with the DeKlerk government over the change in power.  Mandela became president and served a single term.  He has since been very opposed to any sort of personality cult, and now in his 90s lives a simple life in his home town of Qunu, withdrawn from public, having won the Nobel Peace Prize.
This is all true, as far as it goes.
However, there's more to the story that doesn't get mentioned much.  Nelson Mandela was a darling of Soviet Russia for a reason.
Unlike Martin Luther King jr and Mahatma Gandhi, Mandela was not a pacifist.  In fact, he was arrested several times for repeatedly calling for armed violence against the South African government.  His first arrest and trial was for treason, for fomenting rebellion against the government. 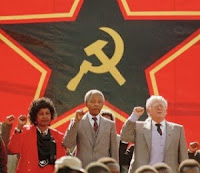 Originally suspicious of communism, in the 1950s, Mandela became interested in the writings of Marx, Lenin, Engels, Stalin, and Mao.  Mandela also worked with the Soviet Union's general campaign of working for revolution around the world (their "wars of national liberation").  He clung to communism even after being released from prison. One of the first meetings he attended after apartheid ended was the Communist Party's first public rally in South Africa.
During the 1950s, after the treason trial, Mandela went underground, hiding and wearing various disguises to remain active and fight apartheid.  He helped form the "armed wing" of the ANC, called Umkhonto we Sizwe, which carried out terrorist attacks against whites in South Africa such as bombings at shopping centers, housing near military bases, a beach front, and a court.  In all, 34 civilians were killed and 354 injured in what were frankly terrorist attacks.  And that doesn't count the landmines.  From 1985-1987, landmines were planted by this group in rural areas killing more than 100 people, mostly rural black farmers. When the later Truth and Reconciliation Commission (TRC) was held as a sort of court of restorative justice after apartheid fell, it was revealed that torture without due process was regularly engaged in by the Umkhonto we Sizwe.
Now, its hard to know whether this can be trusted entirely, but when Mandela was finally arrested in the early 60s, this group was reported to have amassed "210,000 hand grenades, 48,000 anti-personnel mines, 1,500 time devices, 144 tons of ammonium nitrate, 21.6 tons of aluminum powder and 1 ton of black powder."  Certainly they had access to weapons and explosives.
As a result, most of the world at the time put the ANC on their terrorist watch list since they were, you know, engaging in terrorism and had heavy communist ties.  A great deal of work has been done to cover this up or ignore it, but you have to take the bad with the good.  And part of that effort was a massive benefit concert which the organizer admits was to rid Mandela of that terrorist name.
Even out of prison, Mandela was filmed singing a song about killing white people. Oh and his wife Winnie?  Arrested for killing people and burying them in their home's back yard.  She was an even more virulent communist.  She praised tying tires around the necks of political enemies and burning them (necklacing).  She had kids abducted from a Methodist minister's wife and had them beaten until they claimed the minister was sexually abusing them.  Her bodyguard Seipei was suspected of being the one who leaked that information to authorities and was found stabbed in the neck in a field.  And when she was brought before the TRC and charges began piling up, the trial suddenly ended amid rumors that Nelson Mandela was intimidating and threatening witnesses.
Winnie Mandela is facing murder trials now after bodies of activists who visited her home were found in her yard, dug up recently.
Its not that Nelson Mandela was a horrific monster, he was certainly not a brutal thug.  But he was the leader of a terrorist organization who called on violence against whites and is to this day at least somewhat communist.  The man refuses to condemn the ANC in anything despite its continuous racist behavior toward whites, refused to call for the ANC to stop violence, and never faced any kind of punishment for his actions or his organization's behavior.  He never faced the TRC for any sort of justice.
This doesn't make apartheid okay, or mean that the white South African government were wonderful folks.  It means that Nelson Mandela belonged in prison and was certainly someone we probably ought not be praising or calling a hero.  And we shouldn't be ignoring or covering up his past, either.  Just because he was oppressed by an evil government doesn't make him a saint.
*This is part of the Common Knowledge series: things we know that ain't so.
Posted by Christopher R Taylor at 8:41 AM