"If you think something is bulls**t, the answer is not more bulls**t."


Not long ago, Bill Maher, controversial HBO talk show host, did a documentary called "Religulous" which mocked religion in general and Christianity in specific.  Maher attacks Islam, Mormonism, Scientology, Judaism and other religions, but seems to spend the most time on Christianity. The section on Christianity is an attempt to prove that the entire religion was borrowed from other existing cults and faiths, and was little more than a cheap knock off with stupid ideas.  Here's a sample:


Maher's main points about Christianity are as follows:
For example, Maher claims that themes of the life of Jesus such as the virgin birth, walking on water, and death on a cross were all borrowed from previous existing religious figures, particularly Horus, Dionysus, and Mithra
Religulous was the best-selling documentary-type film of 2008 and has made over $13,000,000 so far worldwide and only cost about $2.5 million to produce.  It is successful and has been widely lauded by various groups, including an award from the Independent Investigative Group for "the promotion of science and critical thinking in popular media."
So what about Maher's claims, do they have any validity?  Is Christianity a ridiculous fiction copying elements of other religions, following a mythical figure in a religion created by hucksters for wealth and power?
Um... no.  Not even slightly.
Usually in these posts I can find a measure of truth, of distortions or omissions rather than just falsehood but Maher's film is just trash when it comes to these claims.  Calling this film a documentary is like calling Dumb and Dumber a textbook on military tactics. Its almost entirely invention and falsehood, at least when it comes to Christianity.  Maher's work was almost entirely fiction, and easily disproven fiction.  Even Cracked ripped this film's claims to shreds.
Bill Maher chose his experts to support his attack on Christianity from the same pool of experts he picked to mock in religious fundamentalism.  His primary source for the Egyptian god Horus was a book by Gerald Massey written in 1907 called Ancient Egypt, the Light of the World.  Maher repeats the claims in this century-old text without question.

Horus was born of a virgin, and the Jesus story was stolen from that, Maher says.  Horus was the son of a god (Osiris), he points out.  Maher claims that Horus was baptized in a river by Anup the Baptizer, a man later beheaded.  Horus was later tempted in the desert like Jesus, Maher claims.  Horus walked on water, healed people, and raised the dead, Maher claims... to the point of claiming the man raised was "Asar" which translates into "Lazarus."  And for the clincher, Horus had 12 disciples, according to this book.  Amazing!
Except... there's no living Egyptologist who supports these claims.  William Gasque is a scholar from England who holds a Ph.D. from Manchester University (UK). He's a graduate of Harvard University’s Institute for Educational Leadership (1993), and is is President of the Pacific Association for Theological Studies.  He reached out to ten Egyptologists and experts in Egypt's history and legends and every one of them categorically and resoundingly refuted all of the claims Maher gives... except for Horus being the son of Osiris.  Literally nothing else Maher claims, none of the stuff from the 1907 book except that one piece is accurate or true.  Massey apparently just made all that up.
Baptism wasn't even a think in Egypt until Christianity reached it, and there's zero record anywhere of either the Asar or Anup the Baptist stories.  No disciples, no walking on water, no raised from the dead, none of it.  Saying Horus was like Jesus because he was the son of a god is like saying Hercules or Thor is.
Mithra was a Persian God which the Roman centurions picked up as a sort of club religion.  The religion was largely made up of secret rituals and focused on war and combat.  Maher claims that Mithra was born on December 25, performed miracles, and died then was raised again on the third day.  He claims that Mithra was known as the "Lamb," the "truth," and the "way," the "savior," and the "messiah."  Maher claims Mithra (along with others such as Krishna) were born of a virgin as well. 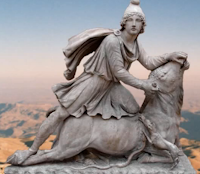