"Beware of false knowledge; it is more dangerous than ignorance."
-George Bernard Shaw 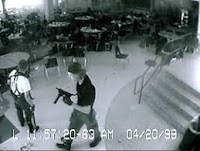 The Columbine High School shootings of April 20, 1999 in Littleton, Colorado terrified and shocked the world. Two teenagers armed with guns and bombs wandered the halls and murdered 13 people and wounded 24 others.  They were cold and callous, shooting without remorse or any apparent feelings whatsoever, and were eventually gunned down by police.
Such a shocking, horrific event was so hard to understand and deal with that the furor took over a decade to calm down.  Every time a school shooting is reported in the news, Columbine comes up again.  The high school is forever now associated not with beautiful Colorado vistas and the students who study there but a ghastly day of murder and terror.
Immediately after the event, calls for gun control erupted, debates in congress about limiting access to weapons were held.  The news had stories about "Goth" culture, rock music, the internet, anti-depressant medication, video games, bullying, and even neo-nazis.
Michael Moore turned his small success with the film Roger & Me into a second film he called a documentary, this time about Columbine High School, called Bowling for Columbine.  In it, Moore portrayed the situation as a terrible tragedy involving basic American culture and gun fanatics.  Gun culture and American society was to blame, Moore argued.
The basic story we were told went like this: The two young men, disaffected youths bullied by others, took revenge on their school using guns that sensible laws would have kept out of their hands to kill other students.  These young men were twisted by violent video games, goth culture, and music by bands such as Marilyn Manson and Rammstein.  Outcasts, depressed and oppressed by athletic types, the young men were driven to despair and insanity. They killed student after student, targeting Christians, blacks, and jocks, until they were gunned down by the police.  This is happening more and more and America clearly has a gun problem.
What really took place?
Well it took a while to puzzle out the real events and sift out rumors and distortions.  Meanwhile, as the story was hot, the media and legislators went crazy.  Gun control legislation was called for, "experts" were on TV discussing the damaging effects of video games, certain kinds of music tagged with newly invented titles like "Dark Rock" were attacked.  Huge anti-bullying campaigns were started in schools and continue to this day.
One of the problems with major news stories, particularly in the modern age, is that the news channels such as CNN are in such a rush to get the story out and are under pressure because they have 24 hours to fill that they will report rumors and tips without checking them out carefully and simply fill time with whatever they've heard latest so that you have some reason to keep watching.
When the Columbine shooting took place, it was the first major event of its kind in which cell phones were so prevalent. There had been school shootings before, but not on this scale or type, and never before had so many people so easy access to phone lines.
Terrified kids and teachers were texting and calling out with scraps of eyewitness information and the news jumped on it as a ready source of reporting. The problem, as any police officer or court lawyer will tell you, is that eyewitness doesn't necessarily mean accurate. Particularly terrified, hiding, and panicked eyewitness.
Another factor was that the school was equipped with cameras, which made for exciting television and lots of images of sinister gun-toting bad guys stalking the school halls.  It was a parent's worst nightmare and people ate it up.
Folks wanted to know why this could have possibly happened, and how they could protect their children from the same thing at their school.  Lots of people (such as Moore) with an axe to grind or a personal agenda capitalized on that.
So we had a perfect storm of bad information, desperate people seeking answers, and folks willing to take advantage of all that.  And the result was as bad as the later Hurricane Katrina coverage: full of rumors, false stories, distortions, and people exploiting the events for their gain.
As the real story slowly came out over the years, the "answers" were already well-established and the coverage of corrections and real info didn't get nearly the attention or news time that the story originally did.  Spread out over years, it was largely missed by people.
For example, the two kids were not part of the "Trench Coat Mafia," they just wore trench coats.  Why?  Well they cover up guns pretty well and look badass.  But the catchy name and the images of kids in trench coats was too good to pass up, and the media went with it.  The Trench Coat Mafia was a little group of gamer kids in school who had pictures of their mafia and the two shooters were never in any of the images.
Although portrayed as being loners and outcasts mocked by others, later research revealed that the kids had friends, went to the prom, and were not unpopular outsiders.  They suffered from depression like... oh, 99% of teenagers in high school.  One of the kids (Harris) was prescribed Zoloft because he seemed especially down, and one of the side effects of this drug can be lack of remorse and aggression.
But it seems from reading his writings (he had a blog on AOL) and talks with psychiatrists that Harris was a psychopath before even starting on the medication.  By the time the shooting took place, Harris wasn't even taking the Zoloft, according to the police.

These kids were bullied some, but later research found that they tended to be the bulliers, not the targets of bullying.  Both bragged in diaries and blogs about bullying freshmen, calling them "fags."  And as anyone who went to school before 1990 can tell the world: bullying did not start nor is it worse today than back then.  If anything it was more brutal and widespread in the past.  And nobody shot up schools over it then.
Neither of the two killers were Goths, they weren't even part of that subculture.   They had an "enemies list" but nobody in the school was on it: all of the names on the list had graduated nearly a year before.  They played video games, but not excessively compared to other students.
They were good students, taking advanced placement classes.  They weren't hated or disliked by the school, nor did they have any special hate or dislike for the school its self.  These weren't loser geeks, Harris had contempt for geek culture, writing things like "YOU KNOW WHAT I HATE!!!? STAR WARS FANS!!! GET A FaaaaaaRIGIN LIFE YOU BORING GEEEEEKS!"  Both were quite intelligent.
They weren't targeting jocks, Christians, or blacks, they were targeting everyone, even friends.  The truth is, this wasn't about revenge against specific enemies as it was a coldly calculated terrorist attack by insane kids who built up their plans for a year.  Dave Cullen has written a book about the events, and he writes in Slate:

School shooters tend to act impulsively and attack the targets of their rage: students and faculty. But Harris and Klebold planned for a year and dreamed much bigger. The school served as means to a grander end, to terrorize the entire nation by attacking a symbol of American life. Their slaughter was aimed at students and teachers, but it was not motivated by resentment of them in particular. Students and teachers were just convenient quarry, what Timothy McVeigh described as "collateral damage."

The killers, in fact, laughed at petty school shooters. They bragged about dwarfing the carnage of the Oklahoma City bombing and originally scheduled their bloody performance for its anniversary. Klebold boasted on video about inflicting "the most deaths in U.S. history." Columbine was intended not primarily as a shooting at all, but as a bombing on a massive scale. If they hadn't been so bad at wiring the timers, the propane bombs they set in the cafeteria would have wiped out 600 people. After those bombs went off, they planned to gun down fleeing survivors. An explosive third act would follow, when their cars, packed with still more bombs, would rip through still more crowds, presumably of survivors, rescue workers, and reporters. The climax would be captured on live television.

It wasn't just "fame" they were after—Agent Fuselier bristles at that trivializing term—they were gunning for devastating infamy on the historical scale of an Attila the Hun. Their vision was to create a nightmare so devastating and apocalyptic that the entire world would shudder at their power.

These guys didn't have any agenda other than to shock and horrify the world at their awesome act of destruction and killing.  They wanted to go down in history.  And if the bombs had gone off, if their year of planning had succeeded, they would have been successful.  As it is they are pretty infamous.
Would gun control have stopped the kids?  Its hard to see how.  The guns they used were already illegal for them to own.  The bombs were also extremely illegal to own and manufacture.  Carrying firearms onto the school campus was illegal.  Shooting people is illegal.  What additional laws would have prevented this?  What the law could accomplish, it already had.
The problem with modern news reporting is that it relies too heavily on immediate, fast information which is almost always at least a little bit wrong.  In the haste to get a story out, first, and to fill a 24 hour day with information to keep people watching, the media tends to use whatever it can scramble to gather, and most of that is just not very reliable.
By the time the truth comes out, well the story is not so hot any longer so they aren't willing to devote much time to the accurate story as they did the misinformation.  And viewers don't have the patience or interest in the news to find it out.  And nobody likes admitting they got it wrong, so that gets downplayed or not even covered sometimes.  There's a reason the bone head mistakes get on the front page in giant font size and the corrections are tucked into a little section on A-17.
Columbine was used by a lot of calculating, callous people for their political and personal ends.  Michael Moore's Bowling for Columbine is a festival of Leni Riefenstahl-esque distortions and outright falsehoods.  He uses non sequential quotes, splices different quotes together, cuts out significant portions, misleads when things took place, adds misleading and even lying captions to images, and more to present an almost totally false impression of the NRA and guns in America.  The kids didn't even go bowling the day before the shooting as the movie claims and the title came from.
The anti-bullying campaigns are from the right sort of sentiment, but are absurd.  Kids bully each other, that's not only part of life, its actually helpful if in a controlled, limited manner.  Consider it like puppies play-fighting; its teaching later life skills to deal with real problems.
In the end, the Columbine shootings started an especially twin ugly trend in America: excessive, super hyped coverage of shooting events, and the perception that this never happened in the past and is getting worse.  But that's for another Common Knowledge bit.
*This is part of the Common Knowledge series: things we know that ain't so.
Posted by Christopher R Taylor at 8:55 AM