"It is perfectly safe to say that George Selden has never advanced the automobile industry in a single particular...and it would perhaps be further advanced than it is now if he had never been born."
-Henry Ford

Dating the first car ever made is difficult.  Many different people were working on the concept of a horseless carriage at the same time and developed their version all around Europe and America.  The first known internal combustion engine as we'd today recognize it was built by Robert Street in 1794:

Inflammable gas was exploded in a cylinder and drove up a piston by its expansion, thus producing the first example of a practical internal combustion engine. The gas was obtained by sprinkling spirits of turpentine or petroleum at the bottom of a cylinder, and evaporating them by a fire beneath.

The up-stroke of the piston admitted a certain quantity of air, which mixed with the inflammable vapour. A flame was next sucked in from a light outside the cylinder, through a valve uncovered by the piston, and forced down the piston of a pump for raising water.

These very early ones tended not to use refined gasoline as it was rare and expensive.  Alternative fuels such as benzine, turpentine, and coal oil were used, but the concept was the same.  The first use of this for an actual vehicle is generally recognized as being 1886, with the Benz Patent-Motorwagen.  Over a century before that, Nicholas-Joseph Cugnot in 1769 had built a steam-powered, four-wheeled self-propelled vehicle called the Cugnot Steam Trolly, but the design was impractical and never caught on.
But the strangest epoch in car-creation history is the story of George B. Selden, who almost destroyed the auto industry even before it got started.  In 1879, Selden filed for a patent on a four-wheeled self-propelled vehicle driven by an internal combustion engine.  The engine didn't work, but it was a concept that could, with enough time and effort.  It took 16 years to get the patent actually accepted due to continual modifications and amendments, but many car enthusiasts consider the initial filing the birth of the automobile. 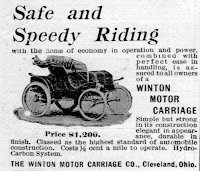 Selden never did get a real car built, but his story doesn't end here.  In 1899, the Electric Vehicle Company filed for rights to build a car from Selden, believing the patent to be owned by him.  However, their cars didn't work very well or sell much, so by 1900 they came up with another idea, contacting other investors such as Alexander Winton, owner of the most successful car company at the time Winton Motor Carriage Company.
They approached Selden with the idea that they could get every car manufacturer to buy rights to the patent and charge a .75% licensing fee for every single automobile sold in America.
This would have added up to hundreds of billions of dollars in no time.
Selden and the men influencing him filed suit to stop the fledgeling auto industry in Detroit.  There, the Dodge brothers Horace and John, Walter Chrysler, Henry Ford, Clement Studebaker, and several others who are now long forgotten were all working on building their first cars for sale.  Ford had failed several earlier attempts but now had a solid concept and design he could build.
Why Detroit?  Because it was the home town of several of the men, and because it was a spot where all the raw materials could easily be accessed and brought together.  Steel, rubber, glass, fabric, leather; everything needed to construct an automobile could be easily and more cheaply brought to the city.  At one point, Ford Motor Company had in its vast manufacturing facilities everything needed to build a car, down to a steel refinery on grounds.  Raw materials went in one end of this machine and cars out the other.  Courts considered this an unfair monopoly and forced the company to break up the rather obvious system of providing all his own parts.
So Selden's coalition called the Association of Licensed Automobile Manufacturers (ALAM) met these men with court orders, injunctions, and demands that they stop their work using his patent.  They could continue to build and sell cars only by licensing their automobile from ALAM.  After all, they argued, the patent for the automobile was filed in the last century and Selden owned it.
The problem is, the patent was flimsy to begin with.  The Selden car never was built, the engine was unworkable, and its difficult to say you own a product that never was made or functioned.  Yet ALAM pressed on.  They showered auto companies with legal pressure, and ran an advertising campaign warning people that if they bought a car from a company not licensed with ALAM, they ran the risk of being sued themselves. 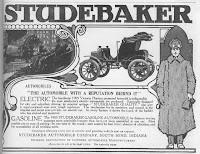 Most of the companies caved.  They were just getting started and had little in the way of sales or product.  A mere .75% seemed like a reasonable cost for business, and one by one Chrysler, Dodge, and other companies fell in line.  Not Henry Ford.  Ford was determined to start, run, and own his own business.  Having tried in the past to build cars with other companies and failing, he was determined to own and run it all.  Other small companies fell behind Ford and formed a coalition of sorts.
Ford's approach was different than the others.  They viewed the automobile as a luxury, a fancy sort of carriage for the very wealthy.  Henry Ford wanted to turn the car into a necessity, with cars built fast an inexpensively so they could be sold for low cost and reach a larger market.  This time around, it worked.  In his first 15 months of business, Ford sold 17,000 Model A cars.
At first, Henry Ford applied for a license with ALAM, but they turned him down thinking his 3 previous company attempts meant he was just a failure.  Henry Ford determined to go on, ignoring ALAM.
A brutal public relations battle matched the legal fight in courts.  For six years the fight went on, with ALAM advertising the dangers of buying Ford cars and Ford saying things like the quote at the top, which was probably accurate.  Certainly nobody who worked on building a car at the time even bothered to look at Selden's work to make their own.  Henry Ford believed that his car had been his idea, and thus he owned it without anyone else being able to rake off his profits for his work.
In September 15, 1909, Ford Motor Company seemed doomed, when presiding judge Charles Merill Hough ruled in favor of ALAM.  Ford's attorney had been nervous from the start, as the judge did not seem to understand the technical aspects of the case.  Judge Hough ruled that even though the vehicle didn't work, it presented a "harmonious whole capable of results never before achieved."
Alexander Winton declared "Nothing now remains but to exact from all trespassers a share of than income they have enjoyed for years without letters patent."  Most of Ford's supporters abandoned him, including Billy Durant, founder of General Motors.  Auto manufacturers resigned themselves to paying royalties on their cars at least until the patent expired in 1912.
Not Henry Ford.  He took the case to a federal appeals court and argued it again.  By this point, Ford was quite wealthy, his new Model T's selling like hotcakes.  He could have easily been able to pay back royalties, but he wanted to own his car outright, and by all accounts was an incredibly stubborn man.  He put aside his own money to indemnify investors and owners of his cars from lawsuits and bore down to continue the fight.
The three-man federal court took the case in 1910 and examined the evidence, heard the arguments, and studied the case.  On January 9, 1911 the court ruled.  All cars built to Selden's specifications - which wouldn't run a car more than a few thousand feet before being ruined - belonged to Selden.  Any other vehicles were their own design and were not subject to the Selden patent.  Henry Ford had won.
By this point, auto manufacturers had paid $5 million in royalties (Selden himself only got about $200,000 of that, which helps explain why the investors were so eager to help out).  In modern dollars, that's almost $110 million dollars.
What can we learn from this?  Well at the very least any new idea is going to be preyed upon by unscrupulous and greedy parasites.  And certainly as Melvin Barger writes:


One lesson is that no elite group, whether government or private, can really determine winners and losers in an emerging industry. (But even if they could, the market should be open to all contenders.)
...
A second lesson is that the market has a mind of its own when it comes to rewarding or punishing specific producers. The eccentric Henry Ford ranked low in the esteem of other early carmakers and was one they wanted to weed out in advance of any actual market test.

This is one of the most interesting historical events of the 20th century that nearly no one knows about.  I first read about it in the Loren Estleman book Thunder Road which dramatizes the events and the early auto business and I recommend it highly.  Interestingly enough, the Wright Brothers tried the same thing with airplanes.


In the end, Ford was so popular and successful that by the 1920s, Henry Ford was building half the cars sold in the US.  Ford to this day is one of the most successful auto companies on earth, with brands in several other nations and is the only US auto manufacturer actually doing well.

As for Selden?  ALAM had started up the Selden Motor Company and built a few cars to lend their ownership of the patent some legitimacy, but when the federal court ruled, ALAM fell apart.  Selden turned his business into the Selden Truck Sales Corporation, and did pretty well selling trucks.  Bethlehem steel bought it in 1930 but Selden died quite wealthy of a stroke in 1922.
Nobody has any business telling other companies who should win and lose, not a private group, not some cabal of the elite rich, and certainly not the government.  No company should be propped up either; no business is "too big to fail" and no business is too important to let go bankrupt, even the automotive industry.  Stepping back and letting it go might be rough in the short term, but let them go the natural way of business and things will work out much better.
Posted by Christopher R Taylor at 8:42 AM

Another fascinating article.
Thanks for writing it.

Nice to know about this update about the Ford. Its really very nice for the company and good step taken by them. So it get fame quickly in outpace.Good work done on this blog, its really very interesting. However, if you want to track your car so have a look on vehicle identification number.