A WASTE OF MONEY?

"This isn't about how the Post was undervalued, either—it's been desiccating for years now. It's about how overvalued those bloated toast-of-the-town social media sites are"


Amazon founder Steve Jeff Bezos is purchasing the Washington Post for $250 million.  Like nearly every newspaper on earth, the Post is suffering plunging revenues, losses, cutbacks, and a shriveling newspaper.  Seriously, remember when newspapers were big enough to hide behind?  The actual size of the page has shrunk, not just the content inside.
But the Post has been dying a slow death for years now.  In fact, the only part of the Washington Post empire (such as it was) which was making any money was not related to news at all, but was the Kaplan Higher Education chain of for-profit colleges.  Recently, however, the Obama administration changed rules about colleges and basically killed the profit of even this sector.  Chris Kirkham writes at the Huffington Post:

By the end of last year, just as Graham and his company now acknowledge they began seeking a buyer for the Washington Post, operating income at Kaplan's higher education division had plummeted to $27 million from $406 million two years earlier, a drop of 93 percent, according to the company's securities filings.

As you can see from this handy graph from the article, the Kaplan group was keeping the Post afloat, briefly: 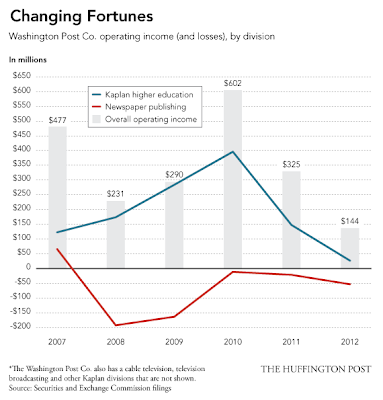 ZELL: Now, the problem comes down to how some great philosopher, I think it was Confucius, who said, "Never pick a fight with a guy who buys ink by the barrel."

CAVUTO: You own the barrel.

ZELL: That's what I thought. That's what Jeff Bezos thinks. What I found out, and what he's gonna find out, is he doesn't own the paper.

Basically the newspaper guys have their own agenda, care nothing for the bottom line, have a "higher calling" and answer only to themselves, even to the point of flat out suicide for the business. They ignored Zell, just didn't care what he had to say and he's saying they'll ignore Bezos, too.  Its a great piece, I recommend reading it all.
**UPDATE TOO: On the Morning Joe, Joe Scarborough asked how this time buying a newspaper was going to turn out differently and the answer from leftist Eugene Robinson helps illustrate my point:

“There are rich guys,” he said, “and there are rich guys.” And from what Robinson has heard—no doubt from totally independent and objective sources—Jeff Bezos, whose net worth is estimated at $28 billion, is “a prince among men.

He's a great man for saving the Washington Post, a hero, a "prince among men" who has proved he's better than other rich folks.
Posted by Christopher R Taylor at 9:04 AM

Another excellent article.
And probably the best explanation of Bezos purchase of the WAPO.

One thing - it's Jeff Bezos, not Steve. Otherwise, yeah.