THE FALL OF DETROIT

"I’d rather see Hitler and Hirohito win than work beside a N*gger on the assembly line."
-Wildcat striker in Detroit, 1943

By now I'm reasonably sure everyone is aware of the horrific collapse Detroit has suffered.  The city is turning back to nature in large swaths, the buildings are collapsing and rotting, the crime is so bad the police avoid entire sections of the city, the public works are so underfunded chunks of town aren't even getting service, feral gangs tear apart street lights and buildings for copper to sell, and there are even bears being spotted in the city.
Not that long ago, Detroit was one of the finest cities in the country.  Once called the "Paris of the midwest" and the richest city in the nation in the1950s, now it is one of the poorest and most dangerous to live in.  Recently the city filed bankruptcy and while a state judge briefly ruled the attempt illegal a federal court overruled the state one and the legal action has begun.  Since its glory days in the 1950s, Detroit has dropped to half its population, despite the population of America doubling in the same time period.
Republicans like to yell about how this is what happens when you put Democrats in charge of a city for too long.  Democrats yell back wondering why New York and other cities long held by Democrats haven't collapsed, too.  Racists yell about how this is what happens when blacks take over.  The truth is a bit more complex and subtle, as anyone thoughtful would expect.
Detroit was built around two things: being on the lake shore for shipping and being where the automobile was finally produced as a regular, reliable product.  Cars had existed before Ford, Chrysler, and all the others started manufacturing their cars, but in Detroit all the pieces came together to make them cheaper and faster to supply an entire growing nation.  The lakes gave ready access to all the raw materials and the drive of these men made the factories possible.
That made Detroit grow rapidly and become wealthy, and when prohibition hit, a third factor was introduced.  Detroit was a major city just across a slim body of water from Canada (north of Canada, actually).  Canada produced liquor as it was not illegal there, and it was brought across to Detroit, often driven over the frozen water in winter in cars.  From Detroit, this cheap liquor was distributed all across America, making the city even richer.
So what happened, what turned this jewel of America into a slum with a slim line of nice-looking buildings downtown?  What made Detroit into a place people fear to travel through, a city collapsing in debt and rot?  And why hasn't it happened to other cities as well?  I've written in the past about the problems in general and how they affect more than just Detroit, but I wanted to return to this theme once more with a bit more information and history to tell the tale of the city more carefully - and sound a note of warning.
BACK IN TIME
To really understand the fall, you have to turn back the clock.  To gear up and produce enough war material for WW2, auto manufacturers and other major factories hired cheap labor, mostly black, from the south.  These men were shipped to Detroit, given houses, jobs, and benefits they'd never even thought possible in the broke south, and put to work on the lines in factories.  Detroit grew by over 300,000 due to this effort, with 50,000 being blacks.
The effect was amazing, boosting production massively and feeding the war machine with vehicles and weapons.  It also changed a city largely made up of European immigrants to one with a very large black population as well.  The blacks were mostly housed in new areas built for the express purpose of housing new workers, which meant they lived in one part of town while the whites lived in the other parts. 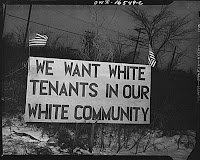 Racial tensions began to build, leading Life Magazine to declare in 1942 that "Detroit is dynamite . . . it can either blow up Hitler or blow up the U.S."  White workers staged wildcat strikes in protest of having jobs given to black workers.  Black workers clashed with southern whites brought north.  According to some sources, behind the scenes, German Abwehr agents were trying to cripple and sabotage the US war machine through ethnic strife.
Finally, in 1943, the federal government finished the Sojourner Truth projects, with housing for workers in Detroit.  Initially it was planned for white workers, but no suitable area was found for blacks, so it was announced that blacks would be living in the projects as well.  A cross was burned outside the projects, and a rally began to form.  1200 whites gathered demanding that blacks be denied access to the living area, because they refused to live with any blacks.  Blacks tried to move in and some violence resulted, but by April, families had moved into the projects.  Guarding these families were over a thousand police and almost 2000 National Guard units.
Yes, you read that right, whites living in the projects didn't want them to be "ruined" by blacks moving in, and blacks wanted to live in them.  The concept of pre-built housing projects being hell on earth had not developed yet; people just wanted homes.  They didn't know what those homes would one day become.

And this is where it gets especially ugly.  Because what we see in Detroit is what we see in more than just that city.  Detroit is the forerunner, not some outlier. Yes, leftists have been running Baltimore, New York City, New Orleans, Los Angeles, Seattle, Portland, and so on for decades as well and they aren't Detroit.  But cities like LA, New Orleans, and Baltimore aren't far behind.  What they look like now, Detroit did 20 years ago.
Coleman Young blamed "white flight" and evil white occupiers on Detroit's fall. Even assuming Mayor Young's analysis is accurate, that doesn't say anything positive about the blacks living in Detroit.  If whites left and their productivity dragged the city down, why didn't blacks pick up the slack?  Whites without education and specialization built Detroit, they invented cars, factories, and made the city what it was before the war.  Blacks could have done the same thing, but did not.  Why?
Mayor Young blamed whites for it all, and his constituency ate it up.  Why did they eat it up?  Because its easier to blame other people than get the job done yourself.  Detroit's blacks had a lot of genuine reason for anger and frustration.  Their bitterness at racism had real roots and was completely reasonable.  But their response to it was not.
After decades and generations of growing up angry at others for your faults, being given cash to live and assistance by government to find houses, jobs, food, and so on, a pattern develops.  All your problems are someone else's fault, while all the good comes from someone else as well.  You aren't the ones who built your homes, you didn't earn your food and clothing, you had it given you by the government.
So you grow up presuming that government is the answer and everyone else is to blame for what you don't like.  You don't take responsibility for anything, don't innovate, show ambition, build, and make anything of yourself like previous ethnic groups had to.
And stagnation builds up.  Its the 1%, its bankers, its white people, its Republicans, its the Tea Party, its Muslims, its Communists, its Mexicans, what have you.  Its always someone else.  Its never your place to make things better, always people who pay taxes (never enough) and the government.  When you can't pay your loans back, well that's just unfair anyone expects you to pay at all.  When you can't find a job, well its the fault of the 1% hoarding money in big vaults they swim around in like Scrooge McDuck.
When the house you were given by the government falls apart, its the fault of other people.  White people are the ones who put drugs in my community, you can't blame the junkie for robbing me and ripping copper out of my walls.  We have no street lights or working sewers because of crime, but that's the fault of white people and the government not doing enough for me.
And an entire generation raises another generation presuming that the answer comes from handouts, that its reasonable and proper to live off the efforts of others, and all your difficulties are due to Racis' and a system that oppresses your people.
Think this is just a black thing?  That its indicative of black people and their inability to make things work?  Look around you, fool.  White people are doing exactly the same thing; we call them white trash or rednecks or what have you, but they live off the state, blame others (often blacks or hispanics), and have exactly the same attitude.  There are Mexicans living in the same attitude, groups of all color and ethnic background.
This has nothing to do with black, it has everything to do with a shifting understanding of responsibility and the place of government.  And with a nation so heavily unemployed and so heavily dependent on unemployment insurance and food stamps, a nation whose attitude has shifted from viewing problems as opportunities to seeing problems as a reason for government to intervene means we're all headed down that path. 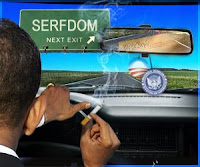 What we see in Detroit, in California as a state, is what America is facing in the future unless there's a fundamental shift in attitude and worldview.  Racial hatreds are being inflamed, dependence on government is growing, and animosity toward people who earn, achieve, and create wealth is growing nationwide.  The same cronyism and system of patronage and government dependency in Detroit is becoming established nationwide.
In the end, I don't pity Detroit, they did it to themselves, with their eyes open, deliberately.  The city didn't have to end up this way, but they found the worst possible response to their problems and not only tried it out over and over, but spewed hatred and hostility toward people who suggested something different.
But what about America, which is headed down the same path?  Can we pity ourselves as we keep electing politicians who give us the same answers, protect the same sources of problems, and stoke the fires of racial anger?  Who will pity America if we all travel down that same road to the same inevitable conclusion?
Shorter version: ... ah, there is no shorter version. Sorry, this one kind of got away from me.
Posted by Christopher R Taylor at 9:34 AM