This is an old post from 2010 that I think bears repeating, as it keeps being proven true over and over in society and the news every year.

The cheerful assumption is that "evolving" must mean "improving." 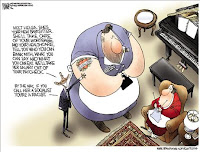 A few days ago, the blog Q&O had an article about liberty and "progressives" or leftists that I meant to write about but lost track of. In it, Bruce McQuain starts by encouraging people to read a recent George Will column about big government and liberty which explains why it is that the larger and more powerful government is, the less liberty everyone enjoys. Will also explains the basic flaw with leftist ideology:

Lack of "a limiting principle" is the essence of progressivism, according to William Voegeli, contributing editor of the Claremont Review of Books, in his new book Never Enough: America's Limitless Welfare State.

In essence, the leftist viewpoint is that government is infinitely open ended, with a continual encroachment of human liberty in the name of doing good by central government power. "A program for every problem" is how George Will puts it. This is in direct antagonism to the ideals of the founding fathers of the United States:


The name "progressivism" implies criticism of the Founding, which we leave behind as we make progress. And the name is tautological: History is progressive because progress is defined as whatever History produces. History guarantees what the Supreme Court has called "evolving standards of decency that mark the progress of a maturing society."

Hence, the idea that the US Constitution is "living," because what was true for the founding fathers is no longer true today, so we cannot be held by their archaic and outdated notions of liberty and limited government. We've evolved beyond that, they argue. Government has to answer new problems and thus must be bigger and more expansive than the founders thought. Besides, their notions of liberty were fine for their time, but we've got a more comprehensive, important understanding of liberty as defined by thinkers such as Marx; liberty meaning equality of outcome and economic standing. For the leftist, being free to be what you can be given your ability and ambition is not free at all, because some end up with less than others. True liberty - "social justice" - they argue, is only found when there are no have nots and none with "too much," as President Obama puts it.

Ultimately, that means government continually becomes larger and more powerful as our liberties shrink and become less significant. Voegli, the writer mentioned by George Will above, explains how this works:


Liberalism’s protean understanding of rights complicates and ultimately dooms the idea of a principled refusal to elevate any benefit that we would like people to enjoy to the status of an inviolable right.” Needs breed rights to have the needs addressed, to the point that Lyndon Johnson, an FDR protege, promised that government would provide Americans with “purpose” and “meaning.”

The one consistent factor here is that without any principle limiting how far government can go to try to guarantee and protect these newly invented "rights," it continues to grow uncontrollably until absolute tyranny (Nazis) or economic collapse (Soviet Russia, Greece, etc) result. 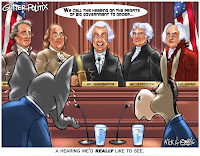 The fatal flaw of leftist ideology is that it is an infinitely ravenous monster. Even well meaning people who want only a limited socialist state with specific boundaries find the next generation or next congress expanding on this bit by bit. If it is good to extend emergency care to the most needy, then why not preventative care? Why not prescription drugs? Why not healthy food? And if it is good for the needy, then why not everyone? And why not then programs to make sure people eat better? And if so, why not programs to make sure children aren't raised with unhealthy habits? And so on. It always, inevitably, expands, and without any limiting principle it expands similarly without limits.

The founding fathers weren't ignorant of this concept, they wrote about the principle of doing good with other peoples' money. They rejected it and understood that true liberty can only exist when government is limited to its most basic, proper roles. Any expansion beyond that is like letting just a little bit of a virus out: it will expand viciously and uncontrollably in every possible manner unless ruthlessly and continually opposed at all times and in every circumstance.

What about the needy, the poor, the downtrodden, and the have-nots, you ask? Typical conservative stereotype is that we believe you should pull yourself up by your own bootstraps and that only the lazy, worthless, and detritus of society fail to. Fiscal conservatives (i.e. small "L" libertarians) will tend to echo that line.

Yet true conservatism includes social conservatism and that without exception must mean a call for greater virtue and ethical behavior in society as well. As the founding fathers continually noted, liberty and democracy cannot persist in an unethical and invirtuous society. Men must be good in themselves and willing to extend aid to those in need out of charity and genuine desire to help - and that aid must be the kind which lifts up rather than allows one to stay low without consequence. Personal responsibility means not just taking care of yourself, but understanding that the burden of helping those in need falls on your shoulders too, not everyone else's

The answer then is not bigger government, more programs, or extended socialism, but a better people and a just, virtuous society which helps their neighbor, their family member, their friend, and those in need next door rather than demanding everyone else do so through an all-powerful big government. Exchanging liberty for personal responsibility and effort is an ill trade indeed.
Posted by Christopher R Taylor at 9:52 PM