"I have no comment at this time"
-Count Chocula, acting attorney 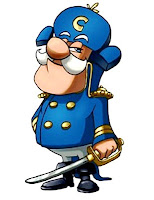 Scandal has rocked the US Navy as a prominent captain has been found out to be a fraud.  Captain Crunch, beloved by children across the world, has been revealed to be falsely claiming his rank.  Careful forensic analysis of the Captain's picture has revealed that his uniform sleeve only shows three stripes, which denotes the rank of Commander.
The Navy has reported that after careful analysis of records, they have no information of his service whatsoever in the US Navy.  Older images of the Captain reveal that he has had as few as one stripe on his sleeve.  One can only speculate that Cap'n Crunch survived this long with his deception on popularity and charisma alone.
The Captain dismissed the controversy with a take on Shakespeare in a recent tweet:

"So much fuss about my name. O, be some other name. What's in a name? That which we call Cap'n Crunch, by any other name would taste as sweet"

In the captain's defense, everyone who commands a ship is technically a captain, whatever their rank.  But no one has actually witnessed Crunch in any real ship sailing in any manner.  There is even some doubt about Crunch's name.  Crunch has been going by Horatio Magellan Crunch for years, but question has arisen whether or not he truly is named after these two famous captains.
Other details about the captain's bio have come under scrutiny as well, with no one able to find his listed birthplace of Crunch Island, let alone the Sea of Milk it allegedly resides in.  NCIS is investigating and very special agent Anthony DiNozzo stated that he could not comment on an ongoing investigation.
Sorry, everyone, I'm going to be very busy today and am not exactly feeling my best lately so this is as good as you get.
Posted by Christopher R Taylor at 8:32 AM