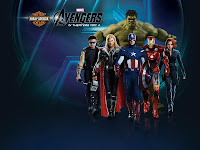 Well I finally watched The Avengers, it just kept being available at times when I didn't have the money to spare. I thought it was very entertaining and fun, with plenty of clever writing. The best part of the movie was probably the interaction between Captain America and Iron Man, with neither side winning their arguments but clearly Cap coming out on top in integrity and leadership by the end.
As they have been set up in the movies, there's a natural conflict between these two characters, with one being an old fashioned slightly naive but extremely principled man and hero ... and a drunkard loudmouth egotist.  Consider their films, where Captain America consistently goes out of his way to go help others at personal risk and no reasonable gain and Iron Man's troubles all come from being who he is.  Even when he went to Unknownistan to help the village, it was because he was mad that his weapons were being misused.
In terms of good literature, there was almost nothing on display.  The only character to show any sort of development was The Black Widow, largely because she was so underpowered and out of her depth she had to have something to do on screen to give her justification for being there.  I watched closely and I don't recall her ever using her wrist widow bite darts once, although she conspicuously equipped them in the usual "gearing up" scene.
Other than Thor, Cap, Iron Man, and the Hulk, the names of these characters were almost never used.  I think Hawkeye was called that once, and I don't recall Black Widow ever being used.  As an old time comic fan I'm not sure why she was even in there other than "we want a girl" and that she was in Ultimate Avengers comics.  In comics history she's hung out with characters like Daredevil, not Thor.
There were some annoying bits in the film, but few.  Black Widow seemed to know how to use the alien weapons without even a half second on screen showing her figuring them out.  The final action scenes were filmed Transformers style, so its so fast, so cut-up, and from such angles that you rarely even see what the aliens look like other than a metallic blur.
They're called the Chitauri, alien shape shifters from Ultimate Avengers as a sort of alternate version of Skrulls.  However, there was zero background or explanation of these guys in the film; the writers didn't even bother.  The name of the race is only mentioned a few times, and they showed no evidence of shape shifting ability.  There's so little actual depiction of the race that its difficult to even know what they look like.  All they are is a video game target, something to bash and shoot without any meaning or purpose.
Loki's plot and what he's trying to accomplish seemed little more than a Macguffin to pull the team together.  His being captured served little purpose other than to sneer and pose and create conflict, and he'd have been better off just not doing anything at all.  How did he even know the Avengers were being gathered, when, and where?  And of course there was the inevitable kick at the War on Terror in a line about mistakes made, "some very recently."  This is Hollywood, after all.
In the end, the only reaction to the war that made any real world sense was the politician complaining about the damage, expense, and loss of life.  He was played as kind of a jerk in the short news clip, but he was right: what the heck?  Half of Manhattan was flattened and none of this would have happened if it weren't for SHIELD digging up the cube.
I know it sounds like I'm complaining a lot, and its true I had problems, but the overall film worked anyway.  It was nice to see the setting treated seriously and maturely.  It was good to see the characters acting consistently and in character, without any overly contrived scenes or behavior.  The action was impressive, although real heroes would have gone out of their way to move the fight away from the city rather than doing hundreds of billions of dollars of damage and killing millions of people to stop the aliens.
I guess it was a fun movie in the end, and I did enjoy it.  I'd watch it again, because it was consistently entertaining, it made me laugh and cheer.  But after all of it, I can't help feeling like there were no heroes in the movie other than Captain America.  The rest seemed to be in it just to have fun and beat things up.
This website helps put a few very obscure and briefly shown things in perspective if the Avengers story has you confused.  You're hardly alone in this, only a hardcore comics fan would even comprehend a lot of it.  But it was so well done that people loved the movie, even not knowing half of what was going on.
Incidentally, both Hawkeye and Black Widow do actually have superpowers.  He never misses (yes he missed in the movie, probably due to fighting mind control if you have to have an excuse), and she's not only extremely long-lived (was around in WW2) but extremely agile and athletic.
Posted by Christopher R Taylor at 8:32 AM