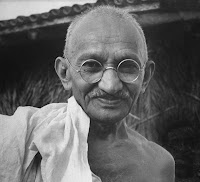 One of the most honored and beloved figures of the 20th century was Mohandas Karamchang "Mahatma" Gandhi, Indian leader.  Gandhi is best known from the Richard Attenborough film by the name which won a ton of awards and prepared viewers worldwide to be utterly shocked and horrified by Ben Kingsley's character in the film Sexy Beast.
Gandhi is almost universally well regarded as a peace-loving leader and figure of great spiritual and moral character.  He is admired for his work in South Africa and India for the rights of minorities, self-rule, and continual stance of loving peace and fellowship of man.
The film Gandhi portrays the man as almost supernaturally peaceful and noble, a saint-like figure of pure goodness and wisdom whose self-sacrifice and life of poverty puts others to shame.  Is it all true, was the man such a paragon of goodness, a flawless figure of ethical stature?
Well, yes and no.  As a human being, Gandhi was a mixed bag, as we all are.
For example, left out of the film, the Wikipedia entry on Gandhi, and most peoples' understanding is that he was a soldier who fought for the British Empire several times.  That's right, non violent Gandhi made war for the British.
His first military effort was in the Boer war with the Natal Indian Ambulance Corps, which Gandhi led.  During the "Kaffir" war, Gandhi was again active as a messenger and stretcher-bearer, and won accolades for valor under fire.  And finally in World War I, Gandhi recruited combat soldiers for England, writing a pamphlet proclaiming "To bring about such a state of things we should have the ability to defend ourselves, that is, the ability to bear arms and to use them...If we want to learn the use of arms with the greatest possible despatch, it is our duty to enlist ourselves in the army."   This prompted his friend Charlie Andrews to say "Personally I have never been able to reconcile this with his own conduct in other respects, and it is one of the points where I have found myself in painful disagreement."  Gandhi himself made sure he would not personally fight against or kill anyone, but was intending to lead these new troops but fell ill and was unable to serve personally.  For his efforts, Gandhi was awarded the War Medal from Queen Victoria.
Initially, Gandhi was not an enemy of or opposed to the British.  He was trained in law in England and became a lawyer at University College London, and adopted English customs there, according to his biographers.
Eventually, Gandhi did end up in South Africa and did take up a fight for the rights of Indians (called "coloreds" in the Apartheid system).  It was there he began to question the British Empire and formulate his ideas on social justice. However, Gandhi was, according to biographers and his writings, loyal to the British Empire until his 50s.
In South Africa, his efforts led to the blockage of a bill that would have denied coloreds the right to vote and weakened a law that required registration and showing of papers by all coloreds.  However, here it is useful to note what Richard Grenier does in Commentary Magazine from 1983:


In the India in which Gandhi grew up, and had only recently left, some castes could enter the courtyards of certain Hindu temples, while others could not. Some castes were forbidden to use the village well. Others were compelled to live outside the village, still others to leave the road at the approach of a person of higher caste and perpetually to call out, giving warning, so that no one would be polluted by their proximity. The endless intricacies of Hindu caste by-laws varied somewhat region by region, but in Madras, where most South African Indians were from, while a Nayar could pollute a man of higher caste only by touching him, Kammalans polluted at a distance of 24 feet, toddy drawers at 36 feet, Pulayans and Cherumans at 48 feet, and beef-eating Paraiyans at 64 feet. All castes and the thousands of sub-castes were forbidden, needless to say, to marry, eat, or engage in social activity with any but members of their own group
...
Low-caste Hindus, in short, suffered humiliations in their native India compared to which the carrying of identity cards in South Africa was almost trivial.

Yet until late in his life Gandhi did nothing at all about caste divisions, and as a Hindu, Gandhi would have seen the caste system as proper and reasonable based on his faith and the principles of reincarnation and karma.  Here are some of his thoughts on the caste system: