"They shall know you by your love."
-Jesus Christ 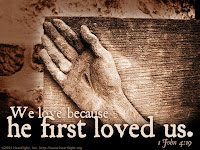 Anyone who has read this blog for a while knows that I don't tend to respond instantly to events or break news.  I like to let things develop and see what's happening a bit more, then try to understand and think through the event and its meaning rather than a quick angry post about how bad something is.
For a while now I've tended to avoid current events and news items, largely because I find them depressing and there just doesn't seem to be any point in commenting on them; nothing will change, its out of my hands.
However, I want to attempt a new series of posts on WATN, one that perhaps has an even more limited audience than the small one I enjoy normally offers.  I want to attempt to give what I believe should be the response of Christians to world and national events, how Christians should behave in reaction to these things and what our statements should be when they are brought up.
To do this, I have to come up with a basic pattern of understanding Christian response to every event, to build a template to work from.  Instead of making this a Bible study or a sermon, I just want to examine some concepts that I think cover some of a Christian worldview.
For example, the first and most important thing a Christian should always be concerned with is the Glory of God, because that is why He created everything, so we're told in scripture.  That means whatever we do, whenever we do it, we should first think not of how it affects us, or how we feel, or what we gain, or how this looks to anyone, but of how God is glorified through it.
A Christian also needs to remember and embrace the fact that God is absolutely sovereign, that there are no "rogue molecules" outside of God's sovereignty, as RC Sproul puts it.  So whatever comes to pass is in His perfect will and not contingent on our striving, arguments, efforts, revolution, or what have you.  This is not an argument for fatalism, but an argument for peace and trust.  God uses us to carry out His will, and we should always do what is right and fight what is wrong, but its not on our shoulders, we don't make it happen or fail to make it happen by our actions.
Further, since God is sovereign, kings and countries, civilizations and movements come and go but He always is there and His word is always absolute.  This is the entire argument of Augustine's book City of God written to help Christians deal with the collapse of the Roman empire.  Whatever happens, God is still in control, and we can trust His will to be perfect and wise.
Next, we should always be concerned with the truth, not winning.  We need to be worried that we are speaking the truth and that the truth is being expressed, not how we feel or how successful we are.  That means we have to be honest, not defensive.  We have to be ready to agree with our opponents when they are right, even if it hurts our argument.  We have to be willing to change our minds if we find out we are wrong.
Also, Christianity is all about love; its perfect expression being the doing and dying of Jesus Christ. Love is not being nice to people or making them feel good, but doing what is best for each person and having our first concern being their wellbeing and what is right for them, not us.  In an ideal, perfect world, everyone would do that and none of us would ever have to worry for ourselves.
Our love should be for the other person, wanting them to be helped and lifted up, not beaten in a debate or crushed under the weight of our victory.  Three days before he died, John Lennon said in an interview:

"Sometimes you wonder, I mean really wonder. I know we make our own reality and we always have a choice, but how much is preordained? Is there always a fork in the road and are there two preordained paths that are equally preordained? There could be hundreds of paths where one could go this way or that way -- there's a choice and it's very strange sometimes..."

Lennon was trying to understand the truth, to know reality and why things take place.  As Christians we have to be the ones who can help a Lennon understand and reach that truth, not to "beat" them but out of genuine concern and love.
And finally, the last basic theme is of humility.  Some time I need to write about true humility as CS Lewis dealt with it in his writings, but some of those thoughts are in my series on Virtues.  Being humble doesn't mean always being self deprecating, but always having the right perspective on all things; understanding your worth and meaning in the light of God's glory and the worth of others.
See, humanity was made by God and declared "good."  All of us are made in God's image.  Again here I'll turn to CS Lewis, from The Weight of Glory

It is a serious thing to live in a society of possible gods and goddesses, to remember that the dullest and most uninteresting person you talk to may one day be a creature which, if you saw it now, you would be strongly tempted to worship, or else a horror and a corruption such as you now meet, if at all, only in a nightmare. All day long we are, in some degree, helping each other to one or other of these destinations. It is in the light of these overwhelming possibilities, it is with the awe and the circumspection proper to them, that we should conduct all our dealings with one another, all friendships, all loves, all play, all politics. There are no 'ordinary' people. You have never talked to a mere mortal. Nations, cultures, arts, civilisations -- these are mortal, and their life is to ours as the life of a gnat. But it is immortals whom we joke with, work with, marry, snub and exploit -- immortal horrors or everlasting splendours.

All humanity should be treated with proper respect, and the understanding of who we are dealing with.  That means no arrogance, condescension, or mockery.  Mock ideas and falsehoods, but not people.  Debate with people over ideas, not the people themselves.  How fat or ugly or stupid someone is has nothing to do with their argument.
And truth, offered in love, with humility, will always glorify God.
So with these principles in mind, how do we approach a recent event?  The biggest thing in the news right now is the Zimmerman trial.  Here we have a sad situation where a young man was killed by a community watch member during a fight.  How should Christians respond to this?
The first thing we should offer is sympathy and concern for the family of Trayvon Martin.  They lost a family member whatever the circumstances were.  It doesn't matter how his family is acting, people can get crazy in grief, and who knows what sort of people are "advising" them.  What matters is that they lost a child and even in a messed up family, that's a terrible situation.
So none of our response should include mockery, attacks on the family, or dismissal of the family's grief.  Even if they are faking it, there's probably some real pain underneath it.
The other thing to keep in mind is that people are pretty easy to push into a corner (something I dealt with in Answer A Fool) by argument.  They might start out not caring much about the topic but repeating what they've heard, but if you attack them or are too aggressive, they'll start becoming defensive and upset, hardening their position.  So we need to be patient, kind, and genuinely interested in what they have to say.
And we have to be willing to listen to what people say.  Everyone is so eager to leap on one side or the other of any given debate and  join a team today, and then they cover their ears and start yelling the talking points they read on their favorite website.  A humble, loving person will listen and consider what is being said.
For example, the trial information and evidence shows that Zimmerman probably acted rashly, that he overreacted to the situation by shooting someone.  Its impossible to know for sure because the information is so sketchy, and certainly Zimmerman reasonably and honestly believed his life was in danger, and that is all self defense requires.  But he probably could have gotten out of it without shooting.
If I was totally on the Trayvon side (as if these are sports teams), I'd never be willing to admit that Zimmerman was in any real danger, because it hurts my position and the Bad Guys believe that.  If I was totally on the Zimmerman side I would never be willing to admit that Zimmerman might not have been in lethal danger.  But someone honestly interested in the truth rather than their own ego or their "team" needs to be willing and ready to learn everything and judge wisely.
We have to show humility and be willing to wait and learn.  None of us are experts on the trial or events, no matter how we act online.  None of us know exactly what happened that night - not even George Zimmerman, who pumped up with adrenaline, wracked with self doubt, and continually pummeled by hostile voices probably doesn't precisely recall the events himself.  So we have to be willing to wait for more information, judge wisely based on what we have, and admit "I don't know" when we do not.
Finally, we have to be willing to realize that this will pass.  It is not as momentous or incredible as the 24-hour news cycle or constant bombardment of information from the internet might lead us to believe.   So be patient and don't take things so incredibly seriously.
In the end, we have to respond with integrity and honor, always keeping our faith in the face of sometimes violent hostility.  And that plays out in our lives by how we respond to events and people.  Christians should be primarily characterized by our love, and known for humility, faith, and peace, not frustration, anger, and bitterness. 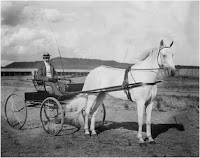 I considered writing this about the Rolling Stone cover of the Boston Marathon bomber but then I thought "who cares?  Its a dying magazine desperate for attention and getting it by doing something foolish and irresponsible that has nothing to do with its alleged focus.  I don't care what the latest publicity stunt by a VHS tape company is either."
So be Christian, live out your faith in practice and love, and let God deal with the big picture.
Posted by Christopher R Taylor at 10:43 AM