"I've never canceled a subscription to a newspaper because of bad cartoons or editorials. If that were the case, I wouldn't have any newspapers or magazines to read."
Richard M. Nixon

There was a time when I considered trying to become a political cartoonist.  I used to enjoy looking through books of political cartoons all the way back to Thomas Nast in the 1800s.  Their one-panel wit and ability to present a concept with quick, distinct imagery was fascinating to me, and politics interested me back even in high school.
I dropped the idea fairly quickly, as the difficulty and pressure of getting something out regularly, even daily, seemed immense to me.  I can tell where they get their ideas now, but as newspapers die the political cartoon dies with them.  Newspapers are cutting back on expenses, and a staff cartoonist is one of the things they're snipping off.
Frankly, people don't much care about political cartoons these days, if they ever did.  It was a powerful way of getting a point across in the past, but in the days of youtube, a cartoon seems weak and pointless to many.  And while some cartoonists in the past were very gifted, many today are so poor at delivering the visual message everything has to be labeled.
Gabriel, the artist at Penny Arcade, hates political cartoonists, not due to any political bent (he's pretty left-leaning himself) but because of their hackery and incompetence. 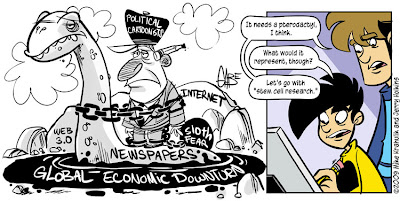 As I wrote at the time of that piece, its not that there are no good political cartoons out there, its that they're so few lately and even formerly good ones have gone off the deep end like Pat Oliphant.  And as the industry faces extreme difficulty in the new media age, some have decided to go a different route.
Pat Cagle is a long-time political cartoonist who saw that newspapers were dumping their in-house cartoonist and going with syndicated or freelance work, if any.
So he started up Cagle.com, a business which buys political cartoons from a wide variety of artists and supplies them for newspapers.  Some cartoonists can't stand the business model, but it seems like a pretty good one for the art to have any future at all.  Cagle has made pretty good money at this, providing content to newspapers to fit exactly what they want.
Some in the industry hate the man for it, like bitter, spiteful hack Ted Rall:


Daryl Cagle is an existential threat, the Osama bin Laden of American editorial cartooning. His relentless quest to squeeze every cent out of the industry keeps leading him to new lows: aggregating cartoons into huge packages in which the cartoonists make pennies but he’s a multimillionaire (like Arianna!), repurposing editorial cartoons over and over to save time, encouraging the worst ethical practices, including undercutting already rock-bottom reprint rates, censoring comments posted by fellow political cartoonists who disagree with him from online forums, and of course plagiarism.

Rall has never been known for subtlety or understatement in his work, but for some reason he gets a lot of business.  But Cagle pulled something recently which really set off the angry comments.  Check out these two cartoons: 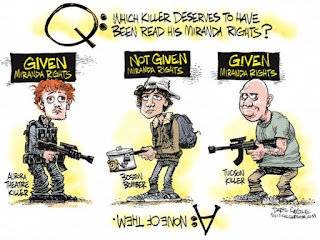 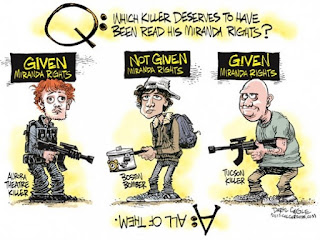 Now, as you can see, they are identical except for the "solution" caption at the bottom, which is exact opposites.  The Boston bomber was actually read his rights, incidentally.  Both ran on Cagle.com, and his explanation?  He changed his mind. Michael Cavna writes at the Washington Post:


By Monday, Cagle published the same visual, but with the caption changed to express that “All of them” deserved to be read their rights.

“I got such a strong reaction from readers against the first version of the cartoon, with many well-reasoned arguments, that I changed my mind — something that doesn’t happen much in this profession,” Cagle tells Comic Riffs on Wednesday afternoon. “So I posted a revised version of the cartoon.

An alternate explanation: papers were given two options to run, based on what they preferred in a political cartoon.  And that's the explanation that most people seem to figure was accurate.  And its hard to disagree with that assessment; if you change your mind, maybe its time to draw something new maybe even explaining why you did.
Whatever the reason, one thing is sure: political cartoonists must have a single, distinct, and strong opinion on a topic to portray it well in their work.  And if you're willing to sell that out to the highest bidder or turn it into such a business that you're just grinding out what the customer asks for, then you're not really a political cartoonist at all.
As a final note, Cagle brings up something very interesting about the whole Miranda decision in the Washington Post article:


"I remember when the Miranda decision came down in the 1960s, on a 5-4 vote," he writes in an e-mail to Comic Riffs. "It was controversial for a long time; the only area of the law where ‘ignorance of the law is no excuse’ didn’t hold true.

"I got a large enough sampling of e-mails in response to the cartoon ... that I realized the Miranda decision no longer seems to be controversial — it has become a part of our national fabric."

And that is something I'd not considered.  I was born in 1965, Miranda was a Supreme Court decision in 1966.  Effectively my whole life, I've been in a nation where people have to be read their rights - its interesting listening to Dragnet, for example, from the 50s where the cops worked much differently.
I never really even considered the topic much, other than sympathizing with cops and a suspicion that something is basically wrong with the system.  My concern was that the criminal still committed the act, even if a cop forgot to "Mirandize" the suspect.  So why should they be allowed to go free over the lack of reading a statement about rights?  Punish the cop, maybe, but set them free?  That's ridiculous.
And Cagle has a point. Ignorance of the law is no excuse, even if you had no idea its illegal to steal turnips from the farmer's market, you still will get busted and prosecuted for theft.  Except for in this case, where ignorance of your rights means you walk?  That is simply an oddity that I question the validity of.
Yet if you argued that we should get rid of the Miranda reading or change the penalties, people would scream civil rights and call you a fascist.  Something to think about, at least.
Posted by Christopher R Taylor at 8:23 AM