This was posted on WATN a few years ago and it still is very appropriate for today, and I wanted to repost it to go with my bit on Appropriate dress earlier.

"Informing women that the rapist is targeting women who do ABC and then suggesting that the women should do XYZ to reduce the risk factor does not seem to me to be blaming. " 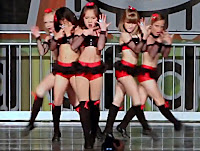 Something unfortunate has happened to our culture where modesty is considered bad and repressive, while no one can criticize or question how someone dresses in public, let alone private.  Point out that maybe that outfit is a bit slutty and someone will throw a burkha at you, accusing you of being a throwback at best, even a Jihadi.  So far most people react negatively to children dressing in this manner, but plenty of parents are dressing their daughters in this way, which suggests the tide is shifting there, too.
Recently the New York Police Department suggested women reconsider their outfits when traveling in an area known for crime.

Note to women in the South Park Slope and surrounding Brooklyn: You  might want to think twice before wearing shorts or skirts when you walk  home alone at night. That’s the message some women say police officers  are spreading as they step up patrols in the area in response to at  least 10 unsolved sexual attacks that have taken place since March.

Now, the response to this hasn't been very positive.  At the Truth About Guns, they suggest you carry a weapon to defend yourself, which isn't a bad idea for a girl on her own, but that seems to be missing the point.
When I used to be able to go hiking, I'd dress for it.  Long pants (to protect against poison oak, poison sumac and assorted brambles), a hat (keeps the sun and rain off), layers of clothing (for the cool morning, which can be stripped off as it warms up), and a good pair of high top shoes or hiking boots (protect your ankles and feet).  I used to see idiots in shorts and Birkenstocks and shorts out there, and while there's no guarantee you'll get hurt that way, why try?  A kicker could probably get away with not wearing any pads most of the time in a football game, but its that every so often that matters, not the usual day.
The point is, wearing a hard hat and steel toed boots at a construction site or pads in a football game is about appropriate wear and reasonable protection from likely hazards.  Its stupid not to do this.  You might feel all flirty and sexy and cute wearing that itty black dress and no bra, but your body isn't a smart bomb.  It doesn't only attract smart, sensitive-but-strong and rich young handsome men, it gets the fat guy with Cheetos dust and a World of Warcraft tee shirt as well as the rapist and thug.
Modesty is a virtue, not something to be avoided and considered oppressive.  Its protective and beneficial to society.  Modesty doesn't only help protect you from predators, it helps shield the men around you from less wholesome tendencies they keep under control.  It helps younger girls learn how to behave at their age, protecting them from their ignorance and foolishness.  And it helps protect your marriage by keeping men at bay until you're with your husband.
And men have to consider modesty, too.  Sure that rock star style tight pants and shirt open to your navel may make you feel like a male model and hopefully attract a woman with questionable judgment, but it doesn't help society any better.  And both men and women sacrifice dignity and self respect for that thrill of having someone attracted to you.  Its totally inward focused at the cost of one's self: this makes me feel good and wanted.
It isn't regressive or tyrannical to expect people to behave with a modicum of self control in public.  Its a reasonable exchange for the benefit of society, its part of the social contract.  You give up small things to gain great things.  You give up a little bit of your "freedom" to look slutty to protect children from thinking that's appropriate and men from tending to pay you attention they ought not.
Dress like a total whore in private with your sweetheart.  Abandon all sense of decency and modesty there; that's where its appropriate.  Do whatever you want there, in private.  Not in secret just not out in public.
The problem is the presumption that every single possible thing that Muslims teach is horrendous.  Guess what: one of the pillars of Islamic faith is charity.  Donating to the poor, giving to those in need.  That's Muslim, is it horrendous?  Throwing the baby out with the bathwater is a well known saying in English culture, but we so often tend to do it because its easier than thinking and discerning.
Most parents think its terrible to dress up little girls like the ones in that picture - or worse - in the name of entertainment and because the girls might like the attention they get.  Guess what, that's what Grandma said about the outfit you're wearing, too.  And the same answer you give right now as to why its okay for you to do so is the one generations down the road will give for prostitots.
Is it really so repressive and awful to just show a little dignity?
Posted by Christopher R Taylor at 9:40 AM